Top Anime Of 2020 That You Should Definitely Watch! 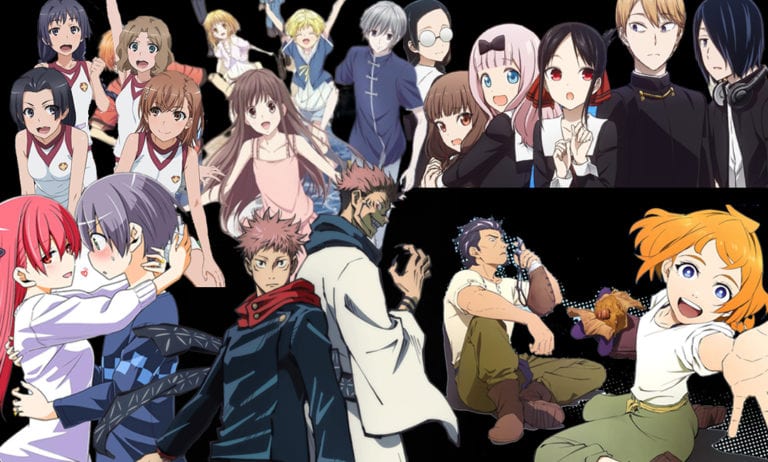 2020 is just a year when hikikomoris like us get to outshine watching and making others watch animes and tv shows. Basically, the world went in hibernation in fear of you-know-which-virus making us veteran weebs as the guide for the weeblings. Though some of the series didn’t got to come out on their anticipated time, the hype of those shows didn’t waver a bit. We can proudly say, 2020 was a blessed year for anime, at least.

These past 10 years of anime has been one hell of a roller coaster ride which gave us some mind blowing animes in every genre. The last decade of anime,rather the post golden age of anime, the variety of concepts, storytelling and art style changed drastically. Here are some of our top picks from year 2010-2019:

So, at the end of the decade, here we are with our top picks for 2020 anime tier:

Deca-Dence has offered in its more-than-enough perfect 12-episode storyline about a decaying world that is then occupied by cyborg-like avatars from an in-game perspective. In this series, there is a lot of stuff that you would have never anticipated, a twist worth giving a shot.

Not only the show represents a female shounen protagonist, but also the episodes are jam packed with detailed mecha backgroungs and thrilling action scenes. No, wonder it’s in our top 2020 animes choices.

2020 was an unfortunate year just like getting hit by a truck out of nowhere. But for strange Rom-com animes, they just did hit us right. The work of the same director as “Hayate the Combat Butler”, Tonikawa: Over the moon for you has bring forth a fresh look of Rom-coms by fast-forwarding by marrying the characters Nasa and Tsukasa or rather going the round about way to unfold the cute love story.

Bofuri:I Don’t Want To Get Hurt, So I’ll Max Out My Defense

Another gaming anime you think? Well, you are totally wrong. It is a Slice of Life anime featuring a VRMMO game.Bofuri essentially drops our main character into a virtual reality world, based on a new game known as “New World Online”. As the character avatar “Maple”, she carries a vast amount of vitality but very low amount of offensive power. Hence, you can easily guess where the English version of the title came from.

What is to look forward in this series are top game fight animation, waifus and lots of fun!

Back in 2010 when Bakuman came out with its brutal world of “manga making and mangaka life”, people took a great liking to it. Kakushigoto is a witty show based on the same genre but with a twist. Kakushi Gotou is a neurotic single father and a mangaka. If you ever asked him what he does for a living… he’d lie. Not because he’s a bad person, because he’s determined to protect his eleven-year-old daughter, Hime, from learning that he draws ecchi. Now, isn’t this interesting?

Shame, self-confidence, imposter syndrome, and the impending threat of deadlines. The author constantly pokes fun at the plights of being a mangaka: Underpaid, overworked, stressed.Kakushigoto captures the special kind of sincere family comedy that will warm your heart in each episode.

A Netflix original series that will swindle your senses and you will sit there awestructed. Jumping from city to city, Great Pretender follows the endeavors of Makoto alongside the cunning Laurent and his colorful associates in the world of international high-stakes fraud. Drugs, race-bettings, swindling, women all at your service.

Such a colourful series, might as well be the homage to artists and graphic designer like Leonid Afremov or Saul Bass, topped with an absolute surprise ending song of Queen’s “The great pretender” cover. It’s your loss if you sleep on it.

A great cast of detectives- one with unlimited balance and another with a strong sense of justice. The two are polar opposites, and their morals clash time and time again. Haru despises Daisuke for using monetary wealth to solve cases, as he believes that money isn’t everything.

An anime with great potential and a very interesting storyline. The thrills of cat and mouse chase along with flamboyant rain of cashes.

Oregairu is an awe-inspiring experience no words could accurately describe. Hachiman Hikigaya hates everything about everything. His social commentaring on the requests of the Volunteer club as an antagonist is what made him different from all protagonists with the similar premise.

Yahari Ore no Seishun Love Comedy wa Machigatteiru. Kan revolves around the graduation prom as emotions are poured into the preparations for the event. At the same time, a chance for the Volunteer Service Club members to better understand each other presents itself. And thus, Hachiman Hikigaya’s hectic and bittersweet high school life begins to draw to a close.

Set in post apocalyptic world, there are two kinds of people: Magic users and others. While magic users live in a better world, the people who can’t use magic lives in a city called “Hole”, where getting stabbed in the stomach in a narrow alleyway by lunatics is really common you know, for shits and giggles.Our protagonist, Kaiman, is one of the people that live in Hole. He appears to be the victim of a magic-user, who laid a curse on his head to become like a lizard and he has no memories of his previous life. Throughout the anime, we witness his struggle to reclaim his old head and memories.

Brutal brutal action comedy series with loving characters in a magic mystery world. Also MAPPA is doing great with CGIs lately. So,what is not to like about it?

Furuba is back! After the fresh start of a new look of Fruits basket, its back for season 2. People turning into the Chinese zodiac animals, dark and mysterious secrets surrounding them, cute, clueless main heroine- a treat for the eye!

In this season, we witness the painful back stories of the zodiac members and some big revelations that can break the impossible curse of people turning into cute animals. Furuba fans grab a seat already!

Keep your hands off Eizouken!

Anime is a medium to be celebrated. And Maasaki Yuasa did it right. Another manga making anime but driven by three super talented eccentric high school girls. From the brilliant mind of Masaaki Yuasa, Eizouken ni wa Te wo Dasu na! is a love letter to animation, wildly creative in its approach, and a testament to the potential of the medium.

Made with utmost care and confidence this piece of work is one of Yuasa’s crown jewel.

Haikyuu!! To the Top

Mo ippon! Haikyuu!!To the top! did the best job of serializing both at the start and the end of the year. The nail biting tension of a sports anime doesn’t come close to the any other genre. And Haikyuu, believe it or not changed the picture of school volleyball clubs in Japan as well.

In season 4, we witness the long awaited debut of the brand new Karasuno to Nationals. The first half focuses on Kageyama, chosen to represnt in All Japan Youth Training Camp while Tsukishima invited to train at Shiratorizawa in Miyagi Prefecture. So, does Hinata back down? Of course not. The second half however is solely focused on the heated battle between Karasuno and Inarizaki.

Espers and witches have been in hype for quite some time now. Thus in Academy City whether they already have powers or are trying to attain them are special. Everyone is reaching towards their ideal self, but some people don’t care what methods get used. The pursuit of the “next level” is absolute. If our limitations only exist so we can surpass them, should there be a limit to how far we can go to get there?

In Toaru Kagaku no Railgun T, Mikoto Misaka and her friends prepare for the Daihasei Festival, a seven-day sports competition between different Esper schools, which, of course, also include the famous Tokiwadai middle school. Misaka and all other students of Tokiwadai are highly motivated and ready to do their best in the upcoming competition.Railgun T dive deeper into the dark side of Academy City. From terrorist attacks to ruthless underground projects, anything is possible.

Confessing love to someone is one of the most intimidating challenges we face in our lives.Kaguya-sama: Love is War takes this relatable fear to the extreme. This isn’t your average rom-com, it’s a fight to the death between two stubborn geniuses in a battle of who will confess first.

In this season too, Kaguya continues in her quest to make Miyuki Shirogane confess his love to her. Same goal but the approach has changed. Or rather, evolved. She’s a lot bolder in this season using tricks as well as other people, to be put Shirogane into difficult situations. And sometimes, this puts her in situations that she loves yet fears.

It is the next BIG SHOUNEN- fans are speculating. It still has room to grow and what we have seen so far, its just the tip of the icebreg. The story revolves around high schooler Itadori Yuuji and his hunt to find and consume (absorb) all the parts of feared demon Ryoumen Sukuna, after he is required to eat one of the demon’s fingers to protect himself. He gets enrolled into Jujutsu High where he receives training to proceed on his journey to exorcise other curses and fulfill the dying wish of his late grandfather. There exists a properly developed and structured system of magic, being portrayed in a relatively decent scenario of world-building.

The premise is the same as a lot of shounens but what we love is the execution. The animation is over the top. Putting together with a smash hit Opening track and a hilarious Ending track. If you dare sleep on this, Sukuna will rip you apart for sure.

This dark fantasy isekai has toyed with our heart strings for too long and its finally back at it. Even though we have seen tons of protagonists like Subaru, White fox tried to include all the good elements from the other genres and paired it up with huge selection of waifus and plot twists.

Grief, trauma, sacrifice, burden, despair, depersonalization, perseverance, everlasting contracts, past sins, and unrequited love will clash and submerge into a river of blood in the second season of Re:Zero kara Hajimeru Isekai Seikatsu.