Know everything there is about Sasuke's Rinnegan from his single Rinnegan, Tomoe and abilieis in this article! The Rinnegan has become an iconic part of both, Sasuke’s character design and his abilities. Sasuke awakened the Rinnegan at a very crucial time, i.e. the Fourth Great Ninja War!

However, there’s a chance that you might’ve missed or forgotten a thing or two! And, that’s what this article is for!

In this article, we’ll go over Sasuke’s Rinnegan in detail! So without any further delays, let’s get into it!

How did Sasuke get his Rinnegan?

Sasuke awakened his Rinnegan after receiving half of Hagoromo’s chakra in the Fourth Great Ninja War.

During the Fourth Great Ninja War, the Allied Shinobi Forces seemed to have won on all fronts except one. The person who made the Shinobi World’s life hell was none other than Madara Uchiha.

He single-handedly destroyed the 5 Kages like they’re toys. To make things worse, he had become the Ten-Tails Jinchuriki.

Everybody had lost hope at this point as nothing would work against this evil God. When the world was on the brink of extinction, an otherworldly being paid a visit to Naruto and Sasuke.

This otherworldly being was the Sage of Six Paths’ Spirit.

The Sage of Six Paths described the history of humans and Otsutsuki to the two. Then, he asked them about their dreams. But, he asked the question for his personal interest only. He had decided to give his power to both of them from the start. Why? Well, he made a mistake when he was alive.

On his deathbed, Hagoromo decided that his younger son, Asura would succeed him. Hence, he gave Asura all of his powers. However, he was too naive to think that the elder brother would simply accept this.

Hence, this marked the beginning of the age-old Indra vs Asura conflict.

This time, he split his powers in half and gave them to our heroes; hoping to put an end to the Indra-Asura conflict. Naruto received the Sage mode powers and Sasuke received the Ocular Powers.

Hagoromo did so because Sasuke is an Uchiha, one with an Eternal Mangekyo Sharingan. Hence, he’s the only one who can awaken the Rinnegan and fight Madara.

Why Does Sasuke Have Only One Rinnegan?

First of all, remember that no definitive answer has been given in the manga or the databook. Hence, we can only speculate.

As stated above, Sasuke awakened the Rinnegan after receiving Hagoromo’s chakra. While Sasuke could have effectively awakened the second Rinnegan, the issue is Chakra Reserves.

Before you jump the gun and say that Sasuke is nerfed, let me explain:

Uchihas do not have high chakra reserves. However, their chakra levels are relatively low when compared to monsters like Senjus and Uzumaki’s.

If we were to compare their chakra reserves to that of other clans, then they’re well above the average! To put this into a better perspective, the only Uchiha to use a pair of Rinnegan is Madara.

Madara used the pair while he had his reincarnated body’s power-ups, i.e. infinite chakra reserves.

Moreover, even Obito could not use two Rinnegans, whom Madara considered to be his perfect substitute. Furthermore, Obito even had a modified body and he could barely hang on with one Rinnegan.

The only human to use a pair of Rinnegan for a while is Nagato Uzumaki, whose Life Force and Chakra reserves are incomparable to most.

So, it is possible that Kishimoto believed that it was for the best that Sasuke has one Rinnegan only. However, he didn’t let this become a reason for Sasuke’s Rinnegan to be inferior. Madara stated that Rinnegan’s power is complete when one possesses the whole pair.

And, this is true, for a standard Rinnegan.

As you know, Sasuke doesn’t have a simple Rinnegan. His Rinnegan has tomoes in it. Due to this, Sasuke can access all of the Rinnegan and Sharingan’s abilities effectively with just one Rinnegan.

It is also important to note that when Sasuke exhausts himself, his Rinnegan loses all of its tomoe and he can’t use abilities like the Susanoo temporarily.

Still, there’s a possibility that Sasuke has one Rinnegan purely to suit his character design and Uchiha lineage.

Can Sasuke deactivate his Rinnegan?

No, Sasuke can’t deactivate his Rinnegan. His Rinnegan is permanent, unlike the Sharingan. However, the Rinnegan loses its tomoes temporarily after Sasuke uses them too much.

He can’t use his Sharingan’s abilities like the Susanoo during this period. Another question that people had was if Sasuke can switch between his Rinnegan and Sharingan. And, Sasuke can’t do that either!

Some people from the fandom think that since Madara could switch between his Rinnegan and his Sharingan, Sasuke should be able to as well!

But, what they’re forgetting is that only Edo Madara could do it. Furthermore, his Rinnegan was a fake Rinnegan, created by Kabuto. Hence, the feat was possible.

Sasuke’s Rinnegan adds three tomoe to two of the innermost circles of the original Rinnegan. Although it looks like a Rinne Sharingan, The official Fourth Databook of Naruto series states that Sasuke has a Rinnegan.

Why Does Sasuke’s Rinnegan Have 6 Tomoes?

The 6 Tomoes on Sasuke’s Rinnegan represent how charged his powers is. The tomoes disappear if he ends up using his Rinnegan too much.

As to why Sasuke has these tomoes, the manga does not state specific reasons. However, we can make some speculations!

The first reason behind tomoes in Sasuke’s Rinnegan could be that signifies his ability to use his EMS.

The second reason or the most likely reason for this is that as Rinnegan is a successor of Sharingan. Also, Hagoromo and Kaguya wield Rinne-Sharingan and they are Otsutsuki’s. Hence, Sasuke received chakra directly from Hagoromo, it could have boosted his Sharingan to a first-copy of Rinne-Sharingan unlike Madara who didn’t have the pure concentration of Otsutsuki chakra. Why it is a first copy of Rinne-sharingan is given ahead.

There’s a possibility that Kishimoto gave tomoes to Sasuke’s Rinnegan to signify his Uchiha Clan lineage, which he is the proudest of.

Does Sasuke have the Rinne Sharingan?

There is only a fine line that differentiates the Rinnegan and the Rinne Sharingan. The two major differentiators are:

Everyone who has unlocked the Sharingan was a Ten-Tails Jinchuriki, with the only exception being the Ten-Tails itself.

This makes a lot of sense as Kaguya was the first being to activate the Rinne-Sharingan. And, Black Zetsu said that Kaguya is the Ten-Tails itself.

While the distinctions aren’t clear, there is one fine line between the two dojutsus. It seems like only a Rinnegan with 9 tomoes spread throughout its concentric pattern can be called a Rinne Sharingan.

Well, Sasuke’s Rinnegan has 6 tomoes in it and he is not the Ten-Tails Jinchuriki; hence he can’t cast the Infinite Tsukuyomi. We’ve come to this conclusion after connecting the dots above.

The 9 tomoe being a necessity for the Rinne Sharingan is a hypothesis we made. We referred to the Official Naruto series Fourth Data Book to make this hypothesis.

The book mentions the term “Rinne Sharingan” for the first time in any of the official Naruto books; be it manga, anime, databooks etc. This very book states that Sasuke has a Rinnegan.

Sasuke’s Rinnegan grants him all the basic abilities of a normal Rinnegan. They are as follows:

Mastery of all changes of Nature and Jutsu:

The Rinnegan grants its wielder the ability to master all five basic nature transformations. It also allows them to learn any jutsu with ease!

Only a handful of Shinobis in history were able to master all five basic nature transformations without the Rinnegan. A prime example would be the Third Hokage, Hirzuen Sarutobi!

Ability to decipher the Sage of Six Paths’ Tablet:

The Sage of Six Paths’ Stone Tablet is arguably the oldest relic in shinobi history; which also proves the existence of Hagoromo Otsutsuki for many.

The tablet discourages the reader from using the powers of the Rinnegan. Also, only a Rinnegan user can read it. Hagoromo made the tablet using the Rinnegan

The Rinnegan grants its user the ability to use the Six Paths Technique. Despite its name, the technique gives 7 different Jutsus/Paths to the user.

They are the Deva Path, the Asura Path, Human Path, Animal Path, Preta Path, Naraka Path, and the Outer Path. However, Sasuke hasn’t used any of these abilities except the Chibaku Tensei.

Along with all of this, it also grants him two special abilities:

Sasuke can open a portal to other dimensions like Kaguya Otsutsuki. This is a crucial ability to fight against Otsutsukis. However, it drains his chakra quickly.

The chakra consumption of this ability is extremely high. It is so high that Obito’s eyes would bleed even though Sakura was constantly supplying the 100 Healings Jutsu’s chakra. Hence, this jutsu drains a huge portion of Sasuke’s chakra reserves.

To make it worse, this is a crucial jutsu when fighting Otsutsukis, as mentioned above. Monsters like Kaguya could put one through hell; as she can switch entire dimensions in an instant!

Sasuke can also use an ability called “Amenotejikara”. This ability allows him to swap the places of two objects/people within a certain range.

This is another ability that has helped Sasuke save himself and others countless times due to its unpredictable nature. One can get used to this ability over time, right? But, that isn’t the case when it is used well.

There are no hand signs or indications when Sasuke uses this ability! Hence the opponent can never guess what will happen! If the opponent becomes too wary of the jutsu, then they might just create another opening for Sasuke!

This unpredictable nature of the Jutsu has led to high rates of success for Sasuke. He was able to destroy Momoshiki’s Chakra Absorbing Rinnegan. He also freed Kawaki from Isshiki’s clutches, preventing the second Karma infestation!

Does Sasuke lose his Rinnegan?

Sasuke lost his Rinnegan after Boruto stabbed him in the eye in chapter 53 of the manga. By Boruto, we mean Borushiki. Momoshiki possessed our protagonist and attacked his biggest problem; the Rinnegan.

The loss of the Rinnegan makes Sasuke a lot less of a threat against the Otsutsukis. To know why Bourshiki attacked Sasuke and if Sasuke can get his Rinnegan back, click here!

RELATED:
Boruto: How Strong Is Sasuke Without Rinnegan? (2021)

Sasuke’s Rinnegan has 3 tomoe in two of its innermost circles. However, Sasuke does not have the Rinne Sharingan, even though most people say so.

One has to be the Ten Tails’ Jinchuriki to awaken the Rinne Sharingan! Sasuke Rinnegan also provides him with a horde of abilities as well.

Along with the usual abilities of the dojutsu; Sasuke’s Rinnegan also allows him to use the Space-Time Ninjutsu and a special jutsu called “Amenotejikara”.

With this, we’ve covered pretty much everything about Sasuke’s Rinnegan! Do you have any other questions or queries? Let us know in the comments below! 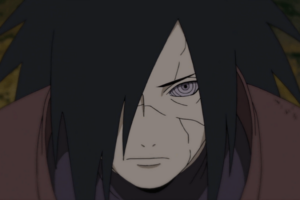 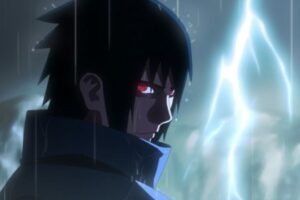 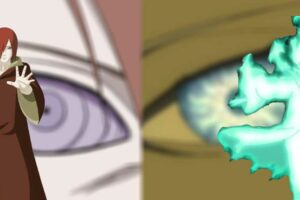