Endorsi Jahad’s Dark Past Is Shown In Tower Of God Anime!

The previous episode of Tower of God revealed the backstory of Endorsi Jahad and it was not a rosy one which befits the title of a princess. Instead, it was dark ruthless past that one would want to forget.

While bashing up the fishermen in her team, Endorsi reminisces about her past, thinking how this was not the first time she was forced to be ruthless in order to achieve what she wanted. As a child Endorsi was adopted by one of The Ten Families. According to Endorsi, the family which adopted her was the least significant of the ten families. She used the term “the house of fallen nobles” to refer to them.

Now these young girls who were chosen were made to compete against each other. The meals that these girls got depended on how well they performed in the training. The girls who ranked high were given luxurious full course dinners, whereas the ones who performed poorly were forced to eat stale bread.

It seems that Endorsi ranked low in the training at the beginning as she is shown eating the stale bread on the floor. Everyday she ate the stale bread, she wished she could taste the sumptuous dinners that were served for the high ranked girls. Endorsi realised that the only way she could get what she wanted was by fighting.

The world inside the Tower is different. You have to fight for what you want. The weak have no place inside the Tower. Realising that she had to be ruthless, Endorsi defeats all the other girls that was adopted by the family, until she was the only one remaining. As she told Bam and the fishermen, after a certain day forward, she was able to enjoy all the delicious food that was served at the table.

Maybe this is what being a Princess of Jahad meant. Be the best among the pack and defeat the competition. Whichever way you see it, Endorsi’s past was pretty dark. Her ruthlessness is partly due to the way she has been brought up.

What were your opinions about Endorsi’s past? Do you think she will betray Bam in order to climb the tower? Can she be trusted? Let us know in the comments section! 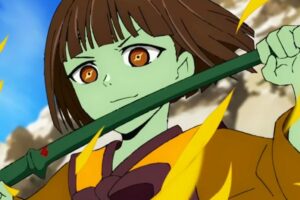