Don't mind that expression. Sekke is our hero and the only flicker of hope we can see in this dark world. 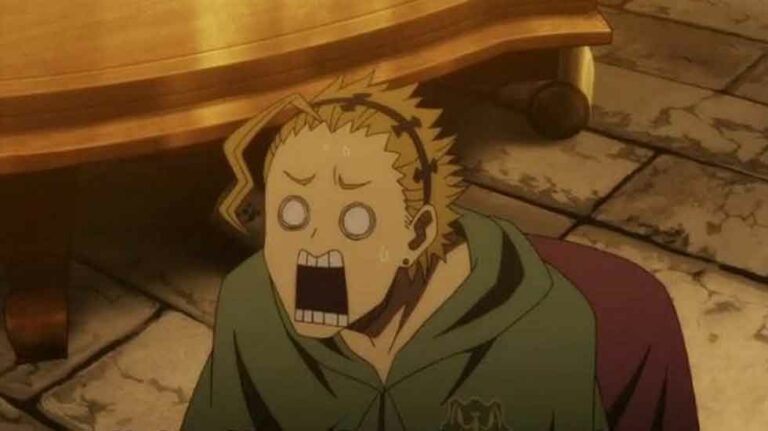 If you clicked this article, then you are already familiar with our all-mighty Sekke-dono. Sekke is not just a dark lord; he is the one who carries Black Clover on his back. He is our hero and the only flicker of hope we can see in this dark world.

Sekke is the Shun Kaido of the Black Clover universe. No, in fact, it is Shun Kaido from Saiki K who takes after Sekke. All who preceded him were hopeless experiments at reaching the optimal result of Sekke. And all those who succeed him are poor copies of the great Sekke. Fu-hah! Now that you and I are both here, it is only appropriate we talk more about Sekke-dono.

Sekke, commonly known as Dark Lord Sekke, made his grand appearance in the Magic Knights selection exam. Of course, he didn’t need to go through all these futile things like exams and selection. But, Sekke is so benevolent and considerate for those beneath him, he chose to go through this thorny path. He would never want commoners to suffer on their own, after all.

He picked Asta to bestow his graciousness upon in this event. Some people call Asta the main character of Black Clover. But, they are oblivious to the truth, living in denial of what lies beyond their short-sightedness. Well, that is also only one of the plans in the grand scheme of things by Sekke. Only those worthy can recognize the eminent aura he emits, so bright that it could’ve blinded you.

You might be questioning why Sekke became a target of Asta’s attack then? It is simple, for it was all according to our Great Lord Sekke. He did not want to overshadow any young hoping-to-be knight nor embarrass the Magic Squad captains (more on that later). So, after displaying his excellence in all aspects, he quietly let Asta take the MVP tag. That is just how humble Sekke is.

He is also incredibly down-to-earth, not hogging fame alone. If he wanted, he could have performed like Yuno. With a flick of his wrists, he could have gotten into any and all squads he desired. However, since everyone should have a fair chance, Sekke (with quite some difficulty) managed to control his powers. Sometimes, since his powers are too strong for a fragile human body to hold in, he is seen hyperventilating. It would be best if you remember not to let Sekke’s appearance fool you.

But, of course, people couldn’t see his brilliance because he is the hidden gem in Black Clover.

It proves quite a laborious task for Sekke to keep his true self away from the limelight. He is just built differently from others, and his grandness just slips out sometimes. How else would you explain him showing up at the most important places, if not his grandiose?

“Asta is the main character”? Then explain why Sekke did the most heroic thing in the Eye of the Midnight Sun Arc? Sekke could swing a sword around, but can Asta ever save King Augustus Kira Clover XIII? I don’t think so. It was an act of immense bravery and intellect. When something happens not once, but multiple times, it is not dumb luck. It is destiny! Sekke’s gut instincts guide him to places people need him the most.

He even graced the Wizard King personally. Mind you; it is a great honor meeting Sekke. You see how despite having so many members in his squad, Jack only calls upon Sekke? It is because he has an inkling of Sekke’s boundless potential. All of Jack’s worries fade away under Sekke’s guidance. As a mage too, Sekke is indispensable. Like I said, only a few people can tell the difference between copper and bronze. Sekke Brozanzza, you see? It was all a foreshadow.

One such person is, of course, King Augustus, for he himself is another gem of the Clover Kingdom. It was only fitting they recognized each other’s worth and decided to stick with each other for the best of the kingdom. Sekke is so far-sighted that he wants no harm to befall the king and thus the kingdom. He risks his life every day and every step of the way by protecting the King of Clover Kingdom!

Why? Well, that is because he is:

Sekke’s powers are a thing to look to out for. He is mightier than the Wizard King himself. And now that Julius is chibi, it is all up to Sekke to protect the Clover Kingdom. It is a given that Sekke has trained all this while if it came to that.

I will let you in on a secret. None of us have seen Sekke’s true power yet. In short, Sekke is known as the Dark Lord because he has the darkness within him and he commands all that is under the moon. Even Lucifero fears hearing Sekke’s name for all devils are but like bugs to Sekke.

Dark Asta and post-training Yami can also not hold a candle to Sekke’s skills. He is a natural at fighting and using mana. In fact, he alone can solo the entire Black Clover universe. Most mages go and grow through training to even touch mana zone. But, when Sekke was born, he was born with a mana zone.

That is also why Sekke is at the Spade Kingdom. He is there to ensure the success of Clover Kingdom. Nacht has a great (not as great as Sekke, but still) perception of people. He picked only the strongest knights to go to the Spade Kingdom. So, of course, he couldn’t miss out on someone as dazzling as Sekke.

So, there you have it! If you haven’t joined the Sekke Dark Lord cult yet, now is the time. I am sure Sekke-dono will review your application with a benevolent heart.