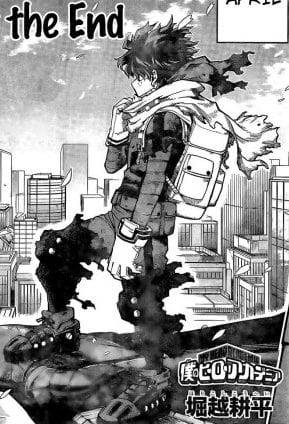 ‘Stumble forward, get confused and then struggle to understand things around you’

Deku finds himself in a very similar situation. He’s in an open field of mazes that reeks of barbaric and villainous gazes. The recent chapters of MHA have established two things very clearly. One, Deku won’t be able to pass his quirk most probably. And second, he has to absolutely defeat All for One in any manner.

The following article contains spoilers from My Hero Academia manga. Read ahead at your discretion!

Contents hide
A Quick Note On One For All:
Why Can’t Deku Give One For All?
The Necessity To Defeat All For One:
Unraveling Oneself And Fighting for Others:

A Quick Note On One For All:

One for All is a very powerful quirk that has been used to save others for generations. There are a total of nine users including Deku as of now. Most of its previous wielders were quite efficient and were able to do good for society. The power was handed down to people who were deemed right by its users. And that’s how the legacy is being carried on for so many years. But a new revealtaion changed everything about OFA.

Why Can’t Deku Give One For All?

In the world of MHA, nearly 90+ percentage of people have inborn quirks. It’s very obvious that the percentage would keep on rising too. So people who are quirkless either go and do normal jobs or somehow affiliate themselves with the hero industry. Melissa is a good example of the quirkless ones who support the heroes from behind the curtains.

A person who already has an inborn quirk can’t wield OFA at its highest potential.

If it happens, then the power will slowly eat away the life force of the user and they will die. The reason why Yagi Toshinori (All Might) was able to manifest a large amount of OFA was that he was quirkless. OFA needs an empty vessel to fill itself in and Yagi was the perfect candidate for that. That’s how he became All Might.

Also, as stated by the first user that it is highly unlikely that Deku will come across another quirkless person who needs such power. It is close to impossible to find a person like that. The meeting of All Might and Deku was a mere chance and it won’t happen again and again. So that’s why the fate of OFA rests on the tender shoulders of Midoriya only.

The Necessity To Defeat All For One:

It has been pressed time and again on how evil and strong All For One is. He is a threat to society and the recent chapters solidify this. The villains got out of the prison and now they are wreaking chaos. It is making people delusional about heroes and they are slowly losing their trust in them. Everything is going according to AFO’s plans.

The sole purpose of OFA is to defeat AFO. It is the only thing that can stop the menace. The first user explicitly stated that the origin of OFA is to repel and not bend to the will of AFO. If OFA gets extracted by AFO, the whole nature of the power changes. The consequences can be catastrophic and no one would be able to stop it. AFO wanted to build a society that would run on his command. But he wasn’t able to because of the opposing power of OFA.

Unraveling Oneself And Fighting for Others:

Tomura Shigaraki has been lurking in the evil spiral woven by his master. AFO wants Shigaraki as a host and will use his hatred to override the basic principles of OFA. And Deku wants to save him before defeating AFO himself. The vestiges inside OFA support him but is that enough?

Chapter 306 saw Deku revealing his secret to all of his friends and going on to defeat everyone on his own. He denies any help from his peers because of the last war but is that the right way? Because if we reflect on the past, this is what killed Nighteye. All Might pushed away from the people he knew in order to protect them. And right now, Deku is on the same path. The story has taken an abrasive turn, let’s see what Horikoshi has up in his sleeves now.

All For OneDekuOne For All