Possible Origins Of Granolah And OG73-i In Dragon Ball Super 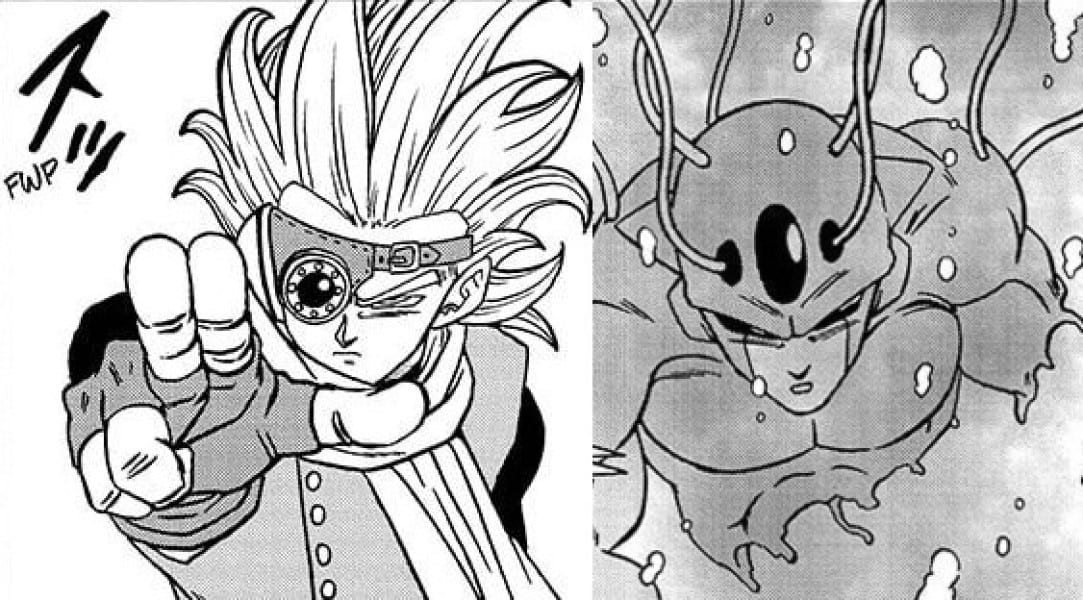 Dragon Ball Super Chapter 67 is a unique chapter in the series in which the new arc “Granolah the Survivor” starts from where the previous arc left off. This kind of scenario is happening in Dragon Ball Super for the first time.

The Moro arc ended with mixed feelings among fans. Some say it was the best arc since the Cell saga, others say it was one of the worst arcs in Dragon Ball Series. Personally, I felt it started off really well. There were some gruesome, nail-biting fights and a couple of familiar characters returned. The only problem I had is with the ending. This was the perfect chance for Toriyama to give Vegeta and the others the chance to shine, but alas, the Goku fanboy inside him couldn’t pull that off.

In a recent interview with Toyotarō, he said that there wasn’t as much planning that took place for the Moro arc compared to its previous one. But, for the upcoming arc, there is a greater amount of planning. Further, fans were excited to know that the latest arc is an original Toriyama styled arc as the famed Mangaka wrote the original draft for the story. So, we can expect some classic storytelling in this arc.

The Granolah Survivor arc started off with OG73’s surprising survival of the explosion which rendered Moro dead. In a sneaky way, two mysterious alien creatures took Seven-Three’s head to their master, Goichi. Tailing their ship from behind is Granolah, who enters the ship and quickly takes out a few men. Goichi commands to active the OG Android soldiers, which are easily taken out by Granola. He proceeds to the cabin where Seven-Three is kept in a regeneration tank, the OG Android which he is looking for. Fans are enthralled with the new character (except for his name) and have already started speculating on his and Seven-Three’s origins.

Contents hide
Theory 1: Granolah and OG73-i are part of the Tuffle Race
Who are the Tuffles?
Theory 2: Granolah is a fallen Angel from one of the erased Universes
Theory 3: Granolah might be a Legendary Super Saiyan
Verdict

Theory 1: Granolah and OG73-i are part of the Tuffle Race

This theory states that Granolah is a Tuffle and the OG Androids, including Seven-Three, are products of Tuffle Technology and Engineering.

Granolah seeks the abilities of Seven-Three, within which Merus’s powers exist. It is said that OG73 was stolen by Moro’s henchmen from Master Goichi and they fed it with data and turned it into a powerhouse (this data could also include high regeneration capabilities). It is possible that the know-how to make OG Androids was in turn stolen by Goichi from the Tuffles. With Seven-Three’s copying abilities (including Merus’s power within it), Granolah probably hopes to re-claim the Android and aim for revenge against the Saiyans, with help from the other survivors from the war.

Hardly anything is known about the Tuffles in the main series. The Tuffles appear mostly in the non-canon Dragon Ball GT, especially in the Baby arc. They are also mentioned in the Plan To Eradicate the Saiyans OVA in Dragon Ball Z but, they’re not to be found anywhere in the Manga. To answer the question “Are the Tuffles canon?” Yes. Toriyama mentions them in an interview where he talks about scouters and who invented them.

Incidentally, its inventors were the Tsufruians (Tuffles), the original inhabitants of Planet Vegeta who were wiped out by the Saiyans.

The Tuffles are a highly technologically advanced race which existed in the Planet Plant. But, due to the Saiyan-Tuffle War, the planet was taken over by the Saiyans, thereby re-naming the planet “Planet Vegeta”. This resulted in the extinction of the race, with a handful of Tuffles possibly surviving elsewhere.

In The Tournament of Power, we see two characters from Universe 2, Zarbuto and Zirloin, who could be Tuffles. It’s also possible that Tuffles could exist in Universe 6 as the Universe 6 Saiyans remain on their home world Sadala and are peacekeepers. The Tuffles and Saiyans of Universe 6 never experienced a Saiyan-Tuffle war like their Universe 7 counterpart.

Theory 2: Granolah is a fallen Angel from one of the erased Universes

In chapter 14 of Dragon Ball Super, Whis mentions that there used to be 18 universes before. In Chapter 28, we see the deities of only 12 Universes being summoned by the Grand Priest. This means that the 6 Universes, which used to be there, are erased from existence. The Grand Priest mentions that when a Universe is erased, everyone, excluding the Angels, is erased from existence. It is said that when a G.O.D dies, the Angel who guided the G.O.D remains on standby until the deceased G.O.D is replaced.

It is theorized that one of those Angels would have gone rogue. With nothing else to do, the Angel could have developed evil thoughts and desires and started creating havoc among the other Angels. Sensing that this Angel is a nuisance, the Grand Priest might have stripped this Angel from his powers and reincarnated him as a Mortal. However, this being would have all his memories intact, just like how Merus’s memories stayed intact when he was revived into existence. With a limited lifespan and without the powers of an Angel, this being sets on a journey to seek out beings with Angel like powers.

Granolah might be the fallen Angel who went rogue. He was probably put on a planet that had high technological abilities (explaining the AI eyepiece tech Oatmeel on his right eye). From sources unknown, he’d got to know that Seven-Three has the possession of Merus’s powers. By taking Seven-Three from Goichi, he probably hopes to acquire Merus’s powers from the Android and create havoc within the Cosmos, continuing his evildoings when he was in the Angel Realm. This theory might be inspired by the rogue Supreme Kai story of Zamasu in Dragon Ball Super.

It is also theorized that Granolah might be another Legendary Super Saiyan, like Broly. The official colored character image released by V-Jump shows he has cream color skin with green hair. Broly and Kale both had green hair when they transformed into the Legendary Super Saiyan form. So, it is possible that Granolah learned how to stay in that form for a long period of time, just like how Goku and Gohan remained in their Super Saiyan forms for 9 days in the Cell Games Saga.

My vote goes towards the theory which states that Granolah and the OG Androids are part of the Tuffle Race.

I think the theory which says that Granolah and the OG Androids are Tuffles might be true because:

Interviewer: Now, with regards to the new anime series, Dragon Ball GT, just how involved are you with it?

Akira Toriyama: I’m only involved with it a little bit. I check the story that gets sent from Toei Animation, and give them some advice. Also, I drew some character illustrations for them. But it’s fun! It feels kind of like, ‘Ah, so they had this kind of skill’. Everyone at Toei Animation has really wracked their brains, haven’t they. I appreciate their hard work. To think they’d make Goku little. With this story, the manga might be able to continue in serialization… but I really have absolutely no desire to draw it. (laughter)

One possible drawback in this theory is, Toriyama usually uses similar kind of names to a particular set of people. For example, Saiyans are commonly named after vegetables like Vegeta, Raditz, Kakkarot, etc. Many angels are named after Drinks like Cukatail, Marcarita, etc. Tsufurijin translates to Fruit. And given Toriyama has hardly abandoned his naming schemes, if Granolah was going to be a tuffle, he would have had a Fruit pun name. But yet again, he could change his way this time, you never know.

The next chapter might reveal Granolah’s origin story. What do you think of the above mentioned theories on the origin of the titular Granolah? Let us know in the comments below!