Attack On Titan Chapter 134: A Faint Hope In Despair 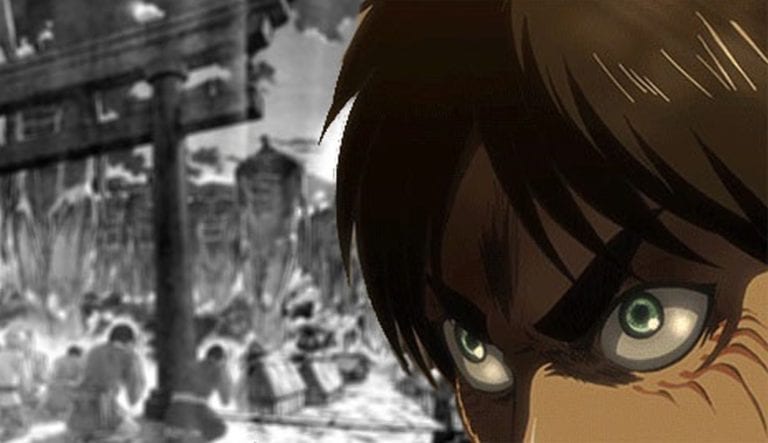 Could Attack on Titan get any darker than it already is? I mean, Isayama did hint long back that the ending would not be something that makes everyone happy. But the despair and pain that the latest chapter exhibits is way too much. I am at a loss here. It is literally hard to root for a single side now.

Attack on Titan ch. 134 is titled “In the Depths of Despair.” And, true to its title, we see humanity’s hopelessness painted all over the chapter. Hopes and lives, both are crushed under the huge legs of the Colossal Titans, as a bloody scenario unfolds right in front of our eyes.

There is no way your heart won’t be torn to pieces after watching a mother desperately trying to keep her child alive even as she falls down from a cliff. The cliff could also signify humanity being on its last leg of sorts and the child being held up is the hope that is left.

Or am I reading too much into it?

But personally, I feel the analogy sits well with the current situation. The monstrosity of the destruction that Eren has caused with his rumbling is on full display here. It’s not just Eldia, the whole of the world, the whole of humanity is under the threat of being wiped out! It is in this desperate moment that Armin, Reiner and the others jump out of a flying plane to make a last stand. The situation might be grim, the chances of success bleak, but that does not stop our warriors from going all out against a well “foe”, who is not exactly a “foe”.

This is very similar, at least theme-wise, to how people, even when faced with death, are ready to hold up and save a life. This following panel best explains the situation we are facing right now, both literally and metaphorically.

But there is something about this child that bugs me you know! I shall discuss that in a different post.

Then there is also the scene of Historia giving birth to her baby (which is basically the first scene of AOT chapter 134). We see the farmer who is supposedly the child’s father in the background. This again is symbolism at its peak by Isayama. Somewhere the birth of a child signifies hope. This page is suddenly followed by the people praying desperately in the face of death. Are they praying for a miracle to happen? Have they accepted their fates? What could be going on in their minds?

Though this is only a page from a manga, the art and concept alone is enough to give me sleepless nights. There is no need for dialogues here. The expressions on everyone’s faces say it all.

The cycle of hate:

Back in Marley, we see that some Marleyans (like the hangar captain) and Eldians like Reiner’s mom have come to realise their mistakes. They understand that their hatred has given birth to the monster they see in front of them. The responsibility for this massacre partly rests on their shoulders too.

Its interesting to see how perspectives change when human beings are faced with daunting scenarios. If they had come to this conclusion while they spewed hatred for the “devils of paradise” and took some time to consider their actions, Eren would not be pushed to take this extreme step. The hangar captain hoped to end the cycle of hate with his attack on Eren. He was holding on to the last straw, at the end of his wits, praying for a miracle to happen. The airships were their last hope… but these very hopes were destroyed in front of their eyes.

From the previous chapter, I thought that the Marleyan airships would cause some damage to the Colossals and Eren’s huge skeletal titan. But it seems that my predictions were totally wrong. The Beast Titan (probably not Zeke) suddenly makes an appearance on the Founding Titan and takes out the Marleyan Airships with his standard baseball throwing moves. This Beast Titan is mostly Eren using the powers of Warhammer and Founding Titan to create a copy of it. Zeke should still be stuck somewhere inside the Founding Titan.

But if Zeke is indeed present inside the Beast Titan, then we might get to see an interesting conclusion to the long-drawn rivalry between him and Levi. The squad captain’s only purpose at this point is to take down the monkey!

While Reiner transforming to the Armored Titan mid-air to take down the Beast Titan stood as one of the best moments of the chapter, one should definitely not ignore the swagger with which Pieck’s Cart Titan slides down the Founding Titan’s skeleton.

In a rousing moment of sorts, the last survivors for Liberio and Marley witness the warriors from Marley and the Eldian soldiers coming together to stop Eren and the Rumbling. This has led some to believe that there is still hope for a happy ending. But considering the damage that Eren has caused, there are bound to be repercussions even if the rumbling is stopped right now.

As I mentioned before, it is hard to root for a single side here. The concepts of right or wrong, good and evil couldn’t be anymore gray or blurred. What is see here is the outcome of whatever has happened throughout the series. It is influenced by the actions of every single player involved in it. It is a fitting climax and there is no saying which way the tides would turn. The wait is going to be tough, but deep down I know it is totally worth it!