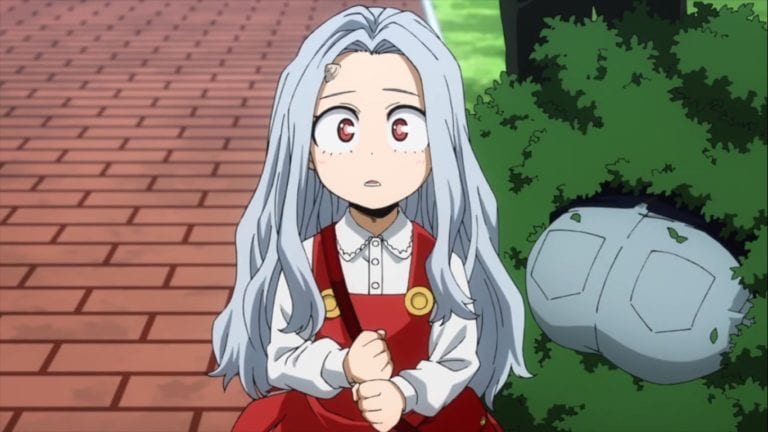 Warning, this article contains spoilers for the latest episode of My Hero Academia Season 4 Episode “Gold Tips Imperial.” If you still haven’t watched the latest episode, you can watch it on Crunchyroll and Funimation!

The characters in My Hero Academia are on a break. After the dark and thrilling Shie-Hassaikai arc, our young heroes have been on a slowdown, thanks to the preparations for the school festival and little to no activity involving the major villains (we can hear most of you groaning for some action already).

The latest episode from Boku no Hero Academia too is a part of the comedy and slice of life arc which has our heroes taking a break from the stress. While the relaxed pace of the episode remains the same as its predecessor, “Gold Tips Imperial” has an extra dose of cuteness as Eri finally gets to see around U.A High with Mirio Togata and Izuku Midoriya.

The episode  certainly seems to be an easily forgettable one, which will be overshadowed by the previous arc. However, it did manage to generate some genuine laughs and set the story well for the upcoming episodes.

Students preparing for the U.A High School Festival have been in the focus for a few episodes now in My Hero Academia, but the latest episode garnered all the interest due to one very cute kid visiting the U.A premises.

That’s right, though “Gold Tips Imperial” is still focusing on the preparations leading up to the school festival, it was done here through the eyes of Eri, who was granted permission to attend U.A.’s school festival.

While many may not consider it important, we found it pretty inspirational how Mirio Togata was still determined to crack a big joke and make a flash entrance at the beginning, while introducing Eri to the young heroes of Class 1-A. To see a hero not give up hope even after the terrible incidents he has faced is certainly heartwarming and very inspiring. There is no wonder Nighteye predicted that he had a bright future ahead of him and we are itching to know how it would come to be.

Mirio and Izuku try to ease Eri into the new scenario by giving her a tour of the school, before plunging her in with a bunch of weirdos with quirks at the school festival. Concerns were raised about how she will be able to handle the sudden interaction with huge crowds and everything that follows in a school festival but for now, Eri seems to be handling it all pretty.

The creators also used this as a chance to show what the other classes and supporting characters, who had till now been shunned to the sidelines, were planning to do at the school festival. Eri and company come across Awase from Class 1-B who boasts about the play they have been preparing for the festival titled “Romeo and Juliet and The Prisoner of Azkaban: The Return of The King.” However, it’s not Itsuka Kendo who is there to control the fiery Awase this time as she is busy preparing for the beauty pageant contest.

We also get to see a stunning Nejire Hado who is determined to win the pageant after being beaten to the first place by Bibimi Kenranzaki ( the reveal is hilarious) the last to around. She is also wary of Itsuka, and recognizes her as a worthy opponent. Eri’s genuine look of awe after seeing the beauty pageant preparations is something we can relate to, especially since we got to see Nejire and her “B-B-B-Beautiful Body!!”

Midoriya and Togata then take Eri to show her what U.A’s support course is upto, which also marks the return of the glorious Hatsume. While they are getting ready for a big splash, Hatsume’s prized ‘baby’ goes bonkers and the heroes quickly rush out from there.

Along with Eri’s tour of the school, we also see Gentle Criminal and La Brava planning extensively to infiltrate U.A High during the school festival and garner some fame while doing so. There is not a lot of information about what exactly they intend to do once they infiltrate the school. While Gentle’s motives don’t seem sinister, we are sure that he is going to get more than what he expected at U.A.

The latest My Hero Academia episode also gives a small sneak peek into how La Brava and Gentle met for the first and how they totally adore and depend on each other to make their plan successful. These minor details and reveals do not add as much to the plot as they add to the comic quotient of the episode. Also, don’t miss the massive dislikes to likes ratio that Gentle seems to be getting on his videos.

The events in My Hero Academia Season 4 Episode 20 seems to go with flow of the recent episodes and there was nothing worth remembering in it, other than Deku getting fired from the dance team (guess why) after telling Eri that he will be participating in the dance at the festival.

The episode also gives us a glimpse of how the pro-heroes, police and the others are still concerned about the school holding a school festival at this time and discuss the same with Principal Nezu. This is worth mentioning because it ties in the current arc of My Hero Academia with the major plot and also gives us a ‘gentle’ reminder that there are villains out there who might not hesitate to attack to school at the right time.

Nezu agrees with the police about the timing of the festival not being right, but he says that the students were in need of the festival more. He intends to show the world that the spirit of the young heroes is not broken and also let the students know that the world is not a cruel, bleak place after all. He tries to allay the fears of the police by increasing the security and safety measures in place for the school festival.

But then something tells us that all will not be peaceful during the cultural festival and the infamous League of Villains might make a comeback in style.

That said, it seems like the show will up its tempo in the next episode, as the preview shows Deku encountering Gentle criminal. After a slew of inconsequential episodes, it’s nice to know that we’ll be getting some thrills expected from Boku No Hero Academia soon.