Slow Loop Manga Gets TV Adaptation Along With A Promo Video, A Poster And More Details

The upcoming Slow Loop fishing anime has received a new trailer and visual, as well as a January 7 premiere date in Japan. 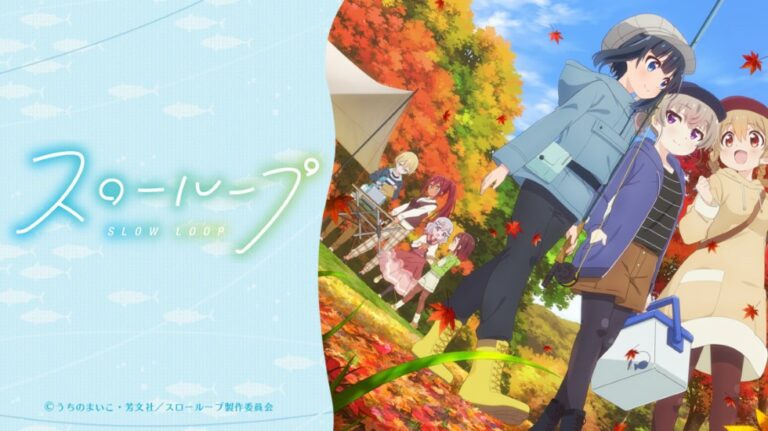 On November 22nd, 2021, the Official Slow Loop Anime Website released a couple of details for the upcoming adaptation that is set to drop on January 7th, 2022.

First, we got another PV featuring the main cast. Check it out!

Next, another key visual dropped. While the leaves of the trees turn red and yellow, Hiyori, Koharu, and Koi heading for fly fishing, and Ichihana, Futaba, Aiko, and Kaede, who start cooking, are drawing a fun fishing camp…

The production team showed a picture of the new character that is set to appear in the Anime.

The staff and cast members are as follows:

Broadcast and distribution information for the TV anime “Slow Loop” has been decided! Click here for more details!

Synopsis (According to MAL):

When Hiyori⁠—a young girl whose deceased father taught her the joys of fishing⁠—headed out to sea for some alone time, she never thought that she would encounter another girl there.

After a while, this girl⁠—named Koharu⁠—and her end up fishing and cooking together, and they get to know each other a bit in the meantime.

During their brief time together Koharu finds out that the reason Hiyori went out to sea that day was that she’s hesitant towards meeting her new stepfamily that same evening. But what a coincidence! Koharu is also meeting her new family tonight! “No. It can’t be a coincidence…” Follow these two ‘sisters’ and their new life together!

Slow Loop is based on Maiko Uchino’s manga, which began in 2018 and has four Tankobon volumes as of January 2021. The manga is serialized in Manga Time Kirara Forward, where it began as a one-shot.