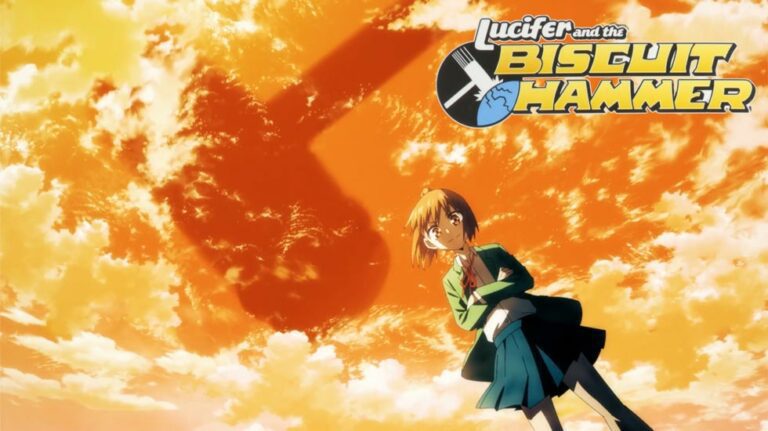 The official website of Lucifer and the Biscuit Hammer (Hoshi no Samidare) revealed a new promotional video for the anime on June 24, 2022, just before its broadcast, featuring the opening and ending theme of the anime.

The OP theme song “Gyoukou” will be performed by Half time Old and the ED theme of the anime is “Reflexion,” performed by SpendyMily.

The new PV also features the character Noi, a lizard that can speak human language, who wishes to save the world from the threat posed by the planet shattering Biscuit Hammer.

Half time Old commented on the OP theme, saying that “Gyoukou” expressed the main character Yuhi Amamiya, as she overcomes her past and grows up.

The artist also added that they were moved by the expression, “By coming into contact with the people around her, she realizes things that she would not have noticed on her own, and the world changes within Amamiya Yuhi” when they read the manga, inspiring them to create the song.

“Reflexion” artist SpendyMily said that they were happy to be in charge of the ED theme of the anime.

“I read the original work and imagined in my mind what kind of anime it would be, and wrote the lyrics to accompany the world view,” the artist said.

Lucifer and the Biscuit Hammer anime is set to release in Japan on July 8, 2022. It will air every Friday at 1:55 a.m. JST on TBS/MBS’ Animeism block.

The previously announced staff members of the series include:

The cast members include:

Satoshi Mizukami’s Lucifer and the Biscuit Hammer (Hoshi no Samidare) manga was serialized in Shōnen Gahōsha’s seinen magazine, Young King OURs, in April 2005, with the final volume of the series published in Nov 2010. Seven Seas Entertainment published and distributed the series in North America.

Mizukami is also the author of Spirit Circle and is currently working on the TV anime Planet With. A manga was launched for the latter series by Mizukami in Young King OURs on April 28, 2018, and an anime television series by J.C.Staff premiered on July 8, 2018.