The film titled "Ensa no Edinburgh (Grudge of Edinburgh)", an original story by the author himself, will focus on the son of Meliodas and Elizabeth, Tristan. 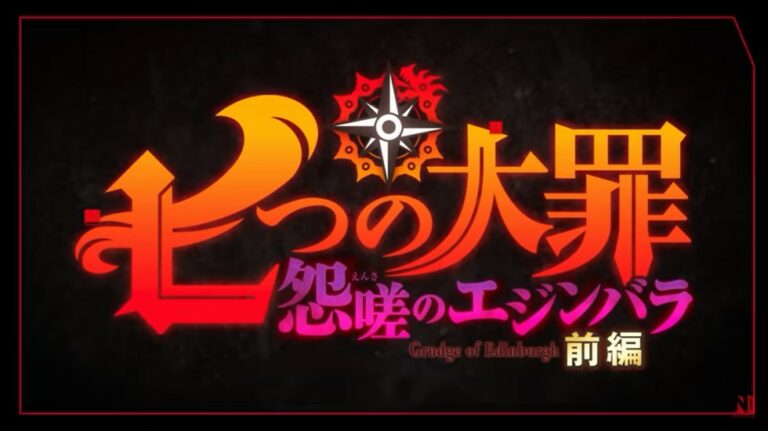 On 9th November 2021, the Netflix Festival Japan 2021 event unveiled a two-part anime film based on Nakaba Suzuki’s work Nanatsu no Taizai (The Seven Deadly Sins). The primary cast and a teaser trailer were also announced at the occasion.

The film titled “Ensa no Edinburgh (Grudge of Edinburgh)”, an original story by the author himself, will focus on the son of Meliodas and Elizabeth, Tristan.

Netflix will release the first part of the film worldwide in 2022. No specific dates are mentioned.

The first trailer for the 1st part was released at the Festival event:

Along with the trailer, key staff members were also announced:

Studio Alfred Imageworks is the 3rd studio to adapt a part of the franchise. Prior to them, In the fall of 2014, A-1 Pictures adapted the first 2 seasons a four-episode Seisen no Shirushi (Signs of Holy War) television special and the Tenkuu no Torawarebito (Prisoners of the Sky) anime movie.

Then Studio Deen took over and produced the 3rd and 4th season along with the second and latest movie in the franchise, Hikari ni Norowareshi Mono-tachi.

Alfred Imageworks is a CGI Animation Studio located in Seoul, Korea. Established in 2003, the company has been involved in various projects such as advertising, broadcasting design, animation, film, and interactive design for nearly 15 years.

It has made numerous game animation projects in its portfolio including Onmyoji, Blade & Soul Revolution, Tera Origin and so on. Click here to take a look at their projects in detail!

Fun fact: Studio Alfred Imageworks worked on Seven Deadly Sins in the past! In 2019, they worked on a TV Commercial and a PV for the franchise. Take a look at them by clicking here and here respectively!

Chief Director Noriyuki Abe has previously been the director and storyboard head for movie adaptations of popular series like Bleach and episode director of Naruto: Shippuden, Nisekoi, Tantei Gakuen Q, Yuu Yuu Hakusho and so forth.

MyAnimeList described the plot of Seven Deadly Sins as follows:

In a world where injustice reigns supreme, the Holy Knights of Britannia defend their kingdom with unrivaled magic and strength. Their most wanted targets are “The Seven Deadly Sins,” a gang of outlaws who were previously regarded as the most powerful of Britannia’s Holy Knights.

Their alleged plot to destabilize the Kingdom of Liones resulted in defeat at the hands of the Holy Knights, yet whispers remain that the seven infamous knights are still alive.

Ten years later, the Holy Knights stage their own coup and depose the King of Liones, establishing themselves as the kingdom’s new rulers.

When Elizabeth Liones, the kingdom’s third princess, stumbles upon a bar owned by Meliodas, the Dragon’s Sin of Wrath and former leader of the disgraced knights, she embarks on a journey to find the Seven Deadly Sins and request their assistance.

The two set out to find Meliodas’ old comrades, but will their journey be filled with hope or despair?