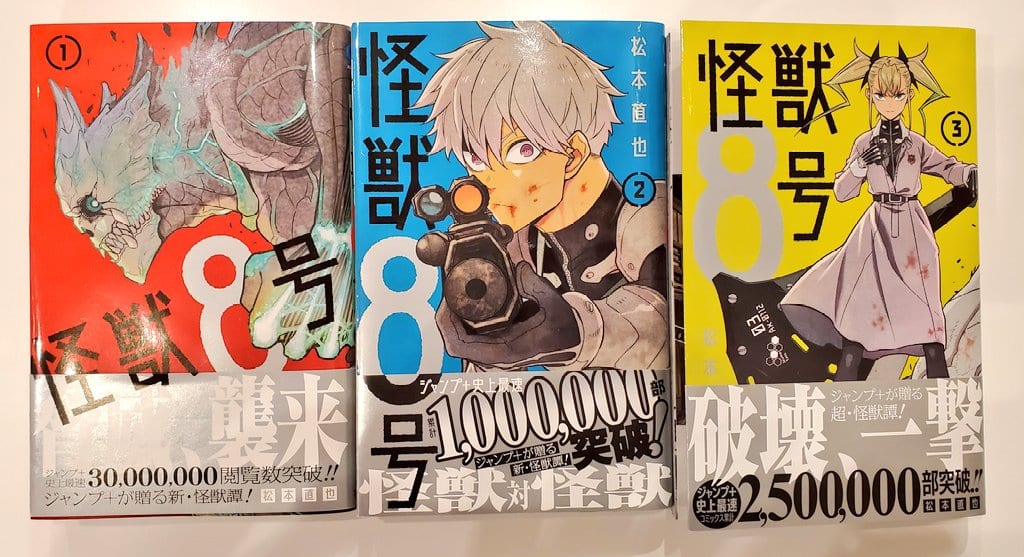 To commemorate the exponential growth of the cumulative circulation of Kaiju No.8 manga, the franchise has released 88 posters that are posted at Shibuya Station on the Tokyu Denen-Toshi Line and Shinjuku Station on the Tokyo Metro. Shueisha confirmed on Wednesday, that the series now has over 2.5 million copies in circulation for Volume 3 releasing on June 4th,2021.

The 3rd volume of the manga will have 2.5 million copies (excluding digital) and volumes 1 and 2 will also get a reprint down the line. When the serialization of the manga started in “Shonen Jump +” in July 2020, it exceeded 30 million views recording it to be the fastest-growing series in the history of the app (* till chapter15 released on October 30, 2020) and a record of more than 1.5 million views in one week of publication beating the previous record set by SPY x FAMILY.

The 88 posters released by Shueisha are the ones created by the readers using the “Kaiju No.8 Recommended Poster Maker” special site that allows you to create your own “Recommended Poster” by combining the dialogues of “Kaiju No. 8” and the scenes in the series.

In addition, Kaiju No. 8 will also launch a fan art competition “Big Kaiju Fan Art Contest,” on Twitter from June 4th to celebrate its latest sales milestone. Much like the previous Chainsaw Man competitions, this will also have three categories: ‘battle,’ ‘daily life,’ and ‘home screen.’ The last one refers to art presented in a vertical format suitable for smartphones.

Users can post their creations on Twitter with either the hashtags #怪獣8号アート or #KaijuNo8art to get a chance of winning special prizes. In addition, 88 people will get a special rubber band key chain by lottery. Participants from all over the world can join in this creative battle.