Skip to content
Home » Series » Re:Zero » Who Summoned Subaru To The World Of Re Zero?
Re:Zero Subaru Natsuki was an extremely ordinary boy, born on Earth, the third planet in the solar system, to a middle-class family in the nation of Japan. He was in third-year public high student with a tendency to not show up in class. One day from his trip to the local convenience store, he miraculously got summoned to a different world. And this world screamed fantasy isekai in every sense!

However, instead of having a blissful isekai life, Subaru was put through a great deal of suffering in this new world. But the basic question we ask is – What was it or rather who was it that summoned Subaru into this new world?

Contents hide
Who summoned Subaru into the world of Re Zero?
How does Satella fit the bill?
The Witch Tea Party
Aldebaran Incident
Satella or Envy?

Who summoned Subaru into the world of Re Zero?

Subaru getting teleported into this new world of Re Zero is an event drowned in an air of mystery. First of all, his summoning was extremely different, to the point of being unique. He wasn’t hit by truck-kun, which is the standard in such cases. Subaru did not step into any game which teleports him to another world. He was simply blinked out of his previous world with no explanation whatsoever.

Another key fact to mention here is that Subaru is not the first visitor from the other world. There have been many people like him, who have suddenly materialized. They are said to be from beyond the Great Waterfalls, which marks the end of the Re Zero world.

We already know about a man who was teleported from Japan, the same as Subaru but much earlier than him. Aldebaran, commonly know as Al, the knight of Princess Priscilla Barielle. He might have been sidelined in the anime adaptation, but he has been a mystery to the Light Novel readers ever since Arc 3. He might share some powers that are similar to Subaru’s Return By Death.

Although it is never confirmed at any point that Satella, the Witch of Envy have summoned Subaru into the world, it is heavily implied throughout the series with various hints scattered around the stories.

How does Satella fit the bill?

Subaru gained a very cruel power-up while he was summoned to the world of Re Zero. Return by Death is a power, which enables Subaru to rewind time and space and reverse the events leading upto his demise. It is possible that only a summoner can grant special abilities to the people they summon (or so we assume).

The Witch of Envy is said to have the authority to exert her control over Time and Space. And since Return by death does the same, it is fitting to assume that she might be the summoner.

Secondly, there is a dark Miasma of the witch clinging on to Subaru. This Miasma has caused a lot of trouble to him. It attracts demon beasts and makes him their prime target. Ram and Garfiel also identified this miasma, which initially made them hostile against Subaru.

This dark miasma was dense enough to hoodwink Petelgeuse. He mistook Subaru for a fellow sin archbishop (Pride). This miasma is undeniably that of the witch of Envy and it gives a hint that she could have summoned Subaru.

Even Subaru eventually believes that Satella was the one responsible for his summoning because of all these hints. We thought we might get a confirmation of sorts when Subaru came face to face with Satella in the third witch’s tea party, but that did not happen!

The Third Witch Tea Party gives us an insight into all the witches of sin, including Satella, Witch of Envy. Satella’s behavior towards Subaru is that of a mother towards her child. Her eyes and her words are full of love, selfless love and her kindness is so incredible, it’s painful to Subaru.

But the point to note down here is that when Subaru accuses Satella of giving him the curse that is Return by Death, she doesn’t deny it, but she doesn’t exactly accept it either.

Moreover, Satella is intimately familiar with Subaru while the latter knows almost nothing about her. She doesn’t want Subaru to suffer anymore, saying that she wants him to live. She also says she wants him to kill her in the end.

Aldebaran, or more preferably Al, is also related to the authority of the Witch of Envy. He may share a similar power to that of Subaru. We can deduce it from the part where Priscilla kicks out Rem in the Light Novel. Al mistakes Rem for Ram in this scene, even though he has never seen the other sister before. He even asks if her older sister is alive or not. After receiving the answer, he falls into distress and it comes off as quite disgusting to him.

“Well, take care of yourself, bro. And young lady… Ah, that’s right, you’re Ram. Take good care of bro here.”
“Don’t be silly. You’re Ram, right?”
“So you’re Rem…and your sister is Ram?”
“This might be a weird thing to ask but…is your older sister alive?”
“—This ain’t funny.”
“You gotta be joking me. So that’s what it was… Makes me wanna puke.”

Al’s ability is speculated to be an early form of Return By Death but that topic is for another article. But this seems to suggest that the witch of Envy has teleported other people to this world before Subaru. However her motives for summoning remain unclear.

After the third witch’s tea party, fans have speculated Satella has nothing to do with the summoning and it could all be Envy’s work. Why? Because it was confirmed that Satella and Envy are two different personalities. The latter is the evil counterpart of Satella. It would make sense if Envy was the one who took over and summoned him.

If Satella really does love Subaru, then why would she imbue him with such a cruel power. RBD made him die over and over again. Satella however says that power is for him to live. But why even summon him into a world where death lurks around every corner in the first place? It doesn’t add up. So Envy seems to be logical option.

All this is just a mere speculation though. Tappei Nagatsuki, the author of Re:Zero, has yet to confirm who exactly summoned Subaru into the world of Re: Zero and what is the reason for him to endure all this suffering. We’ll let the author weave the magic with his words and you all let us know what you think in the comments below. 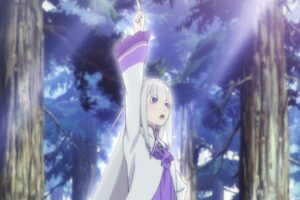