With the release of chapter 64, Dragon Ball Super manga has given us one of the most epic moments in its history. We knew that a transformation was coming. But unlike the previous ones, Goku did not rage transform and go berserk as we expected. Instead he stood his ground and calmly achieved the perfected … 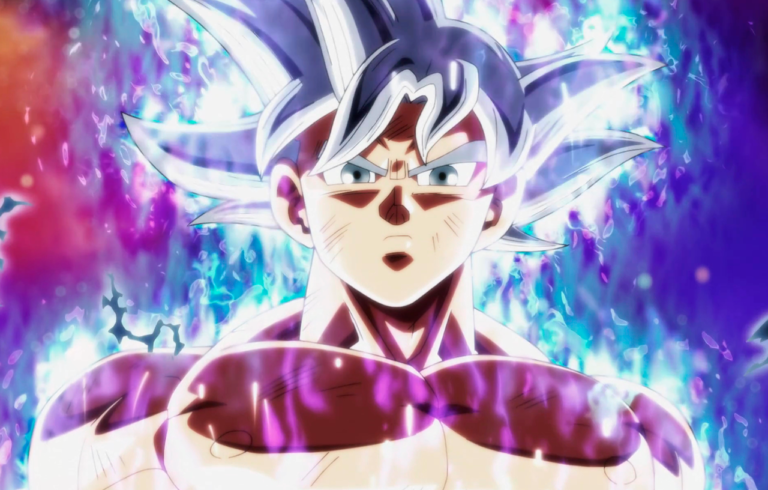 With the release of chapter 64, Dragon Ball Super manga has given us one of the most epic moments in its history. We knew that a transformation was coming. But unlike the previous ones, Goku did not rage transform and go berserk as we expected. Instead he stood his ground and calmly achieved the perfected Ultra Instinct mode!

The latest chapter starts where the previous one left off. We all read how angel Merus was erased from existence. The members of Galactic Patrol in space and Jaco on earth are left with a feeling of emptiness due to the loss of their colleague. Our hero, Goku is seen standing there raging in anger. But he soon calms himself down. He reminds himself what Merus taught him during his training. Goku isn’t fighting alone. He is fighting along with all the members of Galactic Patrol and all the living things across the galaxy. Also that Merus didn’t lay down his life for his sake but for the universe.

Goku then tells Jaco that just like him he’s also a member of the Galactic Patrol and it’s his duty to protect the universe. Just like Merus had wished it to be.

Meanwhile Moro gets up from the rubble he was left in and is surprised to see Goku standing in front of him. He curses Merus for breaking his crystals which he used to copy techniques. He scoffs Goku for saying that he’ll fight him. To which the Saiyan warrior reminds him that Merus’ will lives on. He then proceeds to show us one of the most epic transformations. Even though Goku looks calm the planet starts shaking and suddenly there’s calm all around.

Just the look of Goku in Ultra Instinct form was enough to send Moro into frenzy. He starts attacking Goku and is not able to land a single punch on him. Goku explains why Moro isn’t able to land a single hit to which the villain remarks that he doesn’t scare the power of Gods and their creation is for his taking alone. Listening to this Goku using his Telekinetic powers throws Moro into the air and punches him so hard that it sends shockwaves throughout the planet. One pole to another pole.

Saitama fans you can start crying.

Even Beerus commends Goku on this and shows respect towards him, stating he fights like a God. The G.O.D orders Goku to finish the fight so that he can eat. Whereas Moro who hasn’t had enough starts destroying and pulls out lava from the earth. Goku dodges all the attacks and punches Moro into a lava burst. Then kicking him so hard that the villain begs for mercy.

The chapter ends with Goku asking Jaco whether Moro is sentenced to death or not. Jaco affirms that statement and asks Goku to clean it up for them. But to the Galactic Patrols misfortune Goku tears up his dogi and says that he will fight Moro as an Earthling now. What does he mean by that is either left to the reader to imagine or it’ll be disclosed in the next chapter.

Our assumption is that Goku doesn’t want to kill Moro so he’ll fight him to the point of knocking him out. But even if Goku knocks him out how are Galactic Patrol gonna keep Moro caged? He’s too strong for them to handle. He could even break out during the transport itself.

Also, how did Goku gain new Telekinetic powers? Are they new or did he had those since beginning? Read it in our next blog.

You can read the latest chapters of Dragon Ball Super manga on Viz.com!