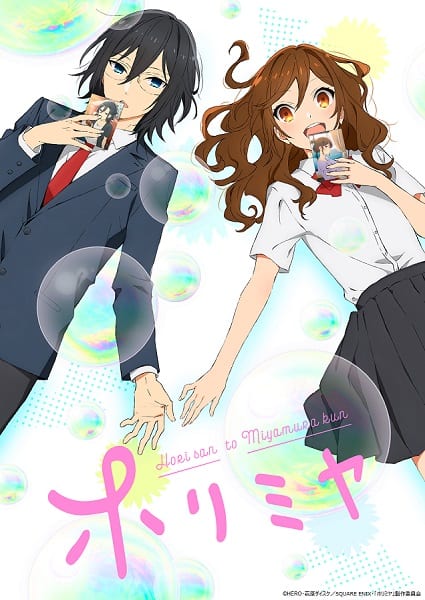 The official website for Horimiya anime revealed that the popular manga with over 5.7 million copies in circulation will be receiving a TV anime in January 2021. Teaser visuals were released on the official website to commemorate the annoucement.

Masashi Ishihama (Persona 5 the Animation, Shinsekai yori) will be directing the series at Cloverworks. Series composition will be handled by Takao Yoshioka (Working’!!, Kishuku Gakkou no Juliet). Haruko Iizuka (Inu x Boku SS, Little Busters!) is in charge of character designs. Music for the series is being composed by Masaru Yokoyama (Yamada-kun to 7-nin no Majo (TV), Shigatsu wa Kimi no Uso).

Hori-san to Miyamura-kun also known as Horimiya is a Japanese shōnen web manga series written and illustrated by HERO. It was released on February 2007 on HERO’s website Dokkai Ahen in a four-panel format. Square Enix compiled the chapters in 10 volumes.

Daisuke Hagiawara adapted the manga with a newly redrawn art as Horimiya. It has been serialized since 2011 in Monthly G Fantasy and is published in English by Yen Press. The original Hori-san to Miyamura-kun manga was adapted into an original video animation series between 2012 and 2018.

The plot the anime according MAL is;

Although admired at school for her amiability and academic prowess, high school student Kyouko Hori has been hiding another side of her. With her parents often away from home due to work, Hori has to look after her younger brother and do the housework, leaving no chance to socialize away from school.

Meanwhile, Izumi Miyamura is seen as a brooding, glasses-wearing otaku. However, in reality, he is a gentle person inept at studying. Furthermore, he has nine piercings hidden behind his long hair and a tattoo along his back and left shoulder.

By sheer chance, Hori and Miyamura cross paths outside of school—neither looking as the other expects. These seemingly polar opposites become friends, sharing with each other a side they have never shown to anyone else