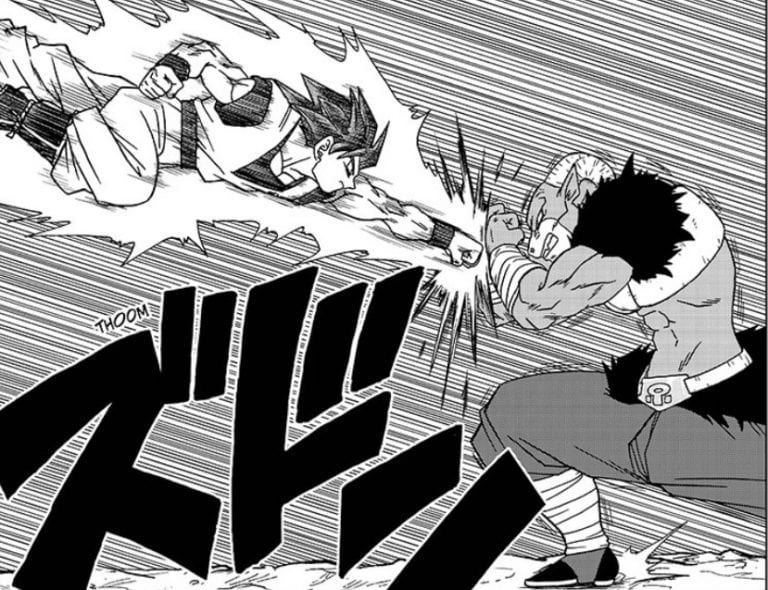 In Dragon Ball Super manga chapter 59 the fight of Z warriors vs Moro and his Galactic Prisoners continues. Goku, who arrived at the scene of the battle in the previous chapter was angered by Moro’s killing of his own henchmen.

In chapter 59 Goku uses this new found ability to tackle Moro once and for all. Thanks to his training with Merus, Goku has finally been able to tap into Ultra Instinct Sign mode at Will.

Although to us fans Ultra Instinct is still fairly new considering we only got to see it only in Tournament of Power but to Moro when he saw Goku use that technique he was barely shocked. Instead he was critical of how a lowly mortal was able to use such a divine technique.

In Chapter 59 of Dragon Ball Super manga, Goku starts the fight by throwing an array of air blasts with his fists which he creates by quickly punching the air in front of him and creating an air blast. Moro counters with his Magical Telekinesis and Energy Blasts but  as seen with his fight with Jiren it is highly impossible to catch Goku at his speed in this form. Yet, Moro with his Magic was able to stop Goku in his tracks by tying the saiyan’s hands and legs with Magical Orbs and immobilizing him. Moro devised the orbs after deducing that the ultra instinct form improves agility and also by perfectly understanding Goku’s fighting style. Moro then decides to kill Goku by throwing a Boulder at him (as if that was even gonna scratch him, the Goku fan in us can’t help but smirk at this).

Goku then instantly overcomes the magic by pushing it off with just his will and appears behind Moro. Meanwhile Vegeta is shown training on Planet Yardrat but he senses that Moro is on the move and that he is fighting Goku at the moment.

Back on earth,Moro starts absorbing the energy around to gain more power. Goku informs others to back off so that he can fight freely only to be informed back by Gohan and Piccolo as to not worry about earth as they have gathered the Dragon Balls. Goku then prepares for a Kamehameha wave and attacks Moro which Moro easily counters. They both fight for a bit and even though Goku is using the ultra instinct sign Moro is able to land a blow to Goku clearly making Moro at least as powerful as Jiren’s base level power. Moro then tries absorbing energy from Goku but due to the latter’s immense speed Moro can’t get a lock on him and is unable to do so.

As the fight between Goku and Moro continues, Beerus, Whis and Merus are seen watching the battle from their world. Whis commends Merus for training Goku and helping him achieve the Sign Form. Although Merus explains that even though Goku can use UI Sign he can’t use it for long as the form drains energy. According to Merus, the stamina to keep up this form is too high and Goku is still unable to use Mastered Ultra Instinct at will. This concerns Whis.

Meanwhile, Moro powers up furthermore stating that he has devoured countless planets before he came to earth and is a lot stronger than the Gods and also that he has seen through Goku’s strategy as to why he is eager to end this fight instantly.

Goku commends  Moro for seeing through him and loses his UI sign form due its limitations and gets thrashed in return. In the final panel, Goku thanks and apologies to Merus for not listening to him and says that holding back on stamina during battle is not really his style and further powers up more and again gains UI sign form.

The chapter ends there but we can assume in future chapters that Goku will thrash Moro around some more until he loses UI Sign due to fatigue and we are expecting that’s when Vegeta will jump in and have his few moments of glory against Moro. It’ll be interesting to see what kind of powers Vegeta might have gained in his training. Maybe this time Toriyama and Toyotarou let Vegeta destroy a main arc villain and this battle may push Gohan to getting back into training and show his untapped potential.

What are your opinions about the latest Dragon Ball Super manga chapter. Let us know in the comments section!!