Re: Zero: Rem’s Mysterious Blank Letter & Why It Happened! Now that Season 2 of Re: Zero has concluded and there is no news of Season 3 as of yet, let’s look back at some of the unanswered questions from season 1 of Re: Zero. Let’s talk about a letter that was written by Rem and sent to Emilia but it was blank when it was delivered, and it was marked by the house of Crusch Karsten.

The Letter of Goodwill

Before we get to the blank letter, let me jog your memory a little bit since it has been a long while since season 1 aired and most of you might have forgotten the minor aspects of the series.

The letter of Goodwill we are talking about in this scene is a letter that was written by Rem containing the seal of the Crusch (Crusch Karsten) camp, detailing the alliance of Crusch with Emilia camp for the purpose of the Royal Selection. Roswaal had proposed this alliance by submitting Mining Rights of the Elior Forest in exchange for military and political help.

Coming back to the scene, Subaru is leading a travelling party en route to the Mather’s Mansion, looking out for any signs of disturbances along the path. That is when they all are interrupted and put under a spell by a mysterious figure clad in white. After Subaru and the other break out of the spell, they capture the mysterious figure who is revealed to be Ram.

Subaru says that this is all a misunderstanding as they sent a letter of goodwill to Emilia to avoid any misunderstandings. But Ram reveals to him that the letter did arrive, but it was completely blank, to which Subaru is shocked. Ram elaborates that the blank letter also bared the seal of the Karsten house, which means that it was a declaration of war.

“When I think of the letter that pompous messenger arrived with… Calling a blank piece of paper a letter of goodwill is quite a farce. What did you mean by this, Barusu?”

“The wax was formally sealed with the Lion Rampant seal of the House of Karsten. In other words, Duchess Crusch Karsten was making a declaration of war against a rival candidate for the throne… Well, that is how we took it.”

Wilhelm further explains that sending a blank letter is a method of conveying to the other party, ‘We have no intent to negotiate.’ and it is not their fault for taking the letter that way.

Subaru’s previous loop met it’s demise at the hands of Sir Julius who slayed him to kill the body that was possessed by the Petelguese Romanee-Conti, the Sin Archbishop of Sloth. However, learning his lessons in the next loops, Subaru decided to correct all his mistakes for a perfect outcome. Hence he also managed to avoid the pre-emptive strike by Ram on the scouting forces by replying on Ram’s Clairvoyance, which enabled her to see through the eyes of creatures on the same wavelength as her.

A black-haired young man rode a land dragon at the forward tip of the formation, carrying a sign that he turned in every direction—as if to ensure it could be seen from front, back, left, and right. Upon that placard was written in large characters:

THE LETTER IS WRONG. MY BAD.

Successfully convincing Ram that the letter was dupe, Subaru next figured out a plan to evacuate Emilia to safety along with the villagers and arranged for a small performance to convince her. The performance was carried out by Wilhelm, Ram and Subaru, who went to the Mathers Mansion and told Emilia that the letter she received was a fake. Wilhelm further said that there is a rink of escaped criminals hiding in the forest and hence, they are evacuating the villagers and her.

Understanding the reason behind the blank letter:

Since Subaru encountered spies of the witch cult posed as travellers on his first loop, he deduced that the witch cult must have switched the letter of goodwill with a fake. But this was hollow reasoning as it did not justify the emblem of the Karsten house that was marked on the letter? So what is it that actually happened?

Remember how Rem wrote the Letter of Goodwill to Emilia, and Emilia claimed it was blank when it arrived? They never mentioned whom it was from, and Subaru never said “Rem” in his dialogues.

This matters because Rem was with Crusch Karsten and the wounded, heading back to the capital for treatment and recovery. They hadn’t been heard or seen since they left to go there. Nobody once mentions Rem or Crusch when everything is said and done regarding the witch cult either.

In fact at the end of the 25th episode, Subaru is about to speak in the carriage with Emilia when the episode gets cut off. This scene is included in the Director’s Cut that aired last year, and he mentions Rem in his dialogue. Emilia had only one response to his rambling – “Who is Rem?

Crusch and Rem fight against both of them and are very easily defeated. Crusch loses her arm in the battle(which is later reattached, thanks to Ferris) and her memories are erased by Gluttony. Rem however had to face worse treatment. Although she had no visible injuries over her body, Gluttony consumed Rem’s entire existence. Thus her existence and memories were wiped off from everyone’s mind. Rem is also reduced to a state of perpetual sleep so she cannot do or say anything.

When Subaru later meets up with Crusch and Ferris and Wilhelm to discuss what happened with Rem and Crush’s memories and for the other affected members of the transport party as well, they link it to the memory altering mist of the White Whale, a creature made by the witch of Gluttony and connect it’s powers to the authority of the Sin Archbishop.

“Like the effect of the White Whale’s mist, meow. The people erased by that mist are erased from everyone’s memories.”

“According to Sir Subaru’s information, the White Whale is associated with Gluttony. If that demon beast could do it, the Archbishops of the Seven Deadly Sins that attacked Lady Crusch and the others are connected to Gluttony as well.”

The authority of Gluttony doesn’t only affect memories, it affects material things too. In case of Rem, anything that was physically attached to her loses their significance. This is why the Letter of Goodwill that had been written by her and marked by the Karsten appeared as a Blank Letter to everyone. By the time they received the letter, Rem’s existence was already wiped out and thus were the writings on the letter.

Subaru had deduced earlier that the letter of goodwill was a blank because it must have been switched out by the spies of the witch cult. But this was a very wrong deduction as it did not explain the reason of how the blank letter contained the seal of the Karsten. 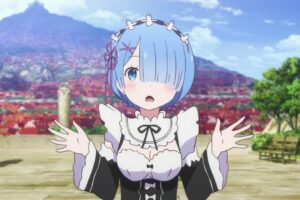