Fans had sternly believed that the author's gender was male. 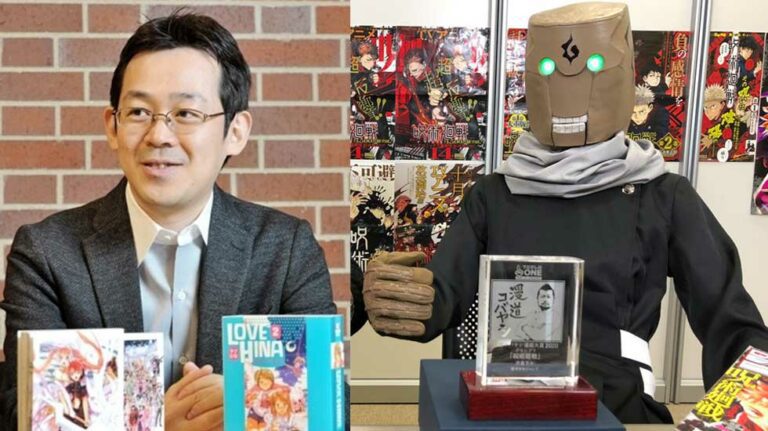 During this discussion, Akamatsu ended up saying that Akutami is a woman.

“…when I was working with ‘Samurai Deeper Kyo’ and ‘Negima,’ half of the artists in ‘Magazine’ were women,” Akamatsu said. “JUMP also had a female writer for ‘Jujutsu Kaisen,’ you know that one. Demon Slayer is also written by a woman, and I think it’s amazing.”

Akamatsu’s casual revelation about Akutami, which is a well kept secret in the manga industry, sent the fandom into a frenzy, sparking a debate about the author’s gender.

Some were surprised by the reveal and defended the author’s right to hide their gender in the public. Many argued that Akutami’s gender was confirmed to be male, based on interviews that the author had with Bleach mangaka Tite Kubo and comedian Kendo Kobayashi.

This was again debated at the time the interview released, with some saying that Akutami using a mannequin and refusing to appear on screen only added fuel to the speculation that the mangaka was a woman.

After Akamatsu’s reveal about Akutami’s gender, MyJitsu quoted some fans pointing out that it was a shame that female mangakas had to hide their face and speak in a male voice in order to be accepted in the industry.

Akutami’s gender has not been officially revealed yet. The debates centering around their gender started popping up after Akutami used a feminine illustration in the author’s introduction column in Jump. Additionally the author’s portrayal of women in the series too has been in a deterrent in “Akutami is a man” theory.

Akutami started serializing Jujutsu Kaisen in Shueisha’s Weekly Shonen Jump from since March 2018. As of Dec 2021, the chapters have been collected into 18 tankobon volumes. The author had earlier said that the manga would end in 2023 if everything goes according to plan.