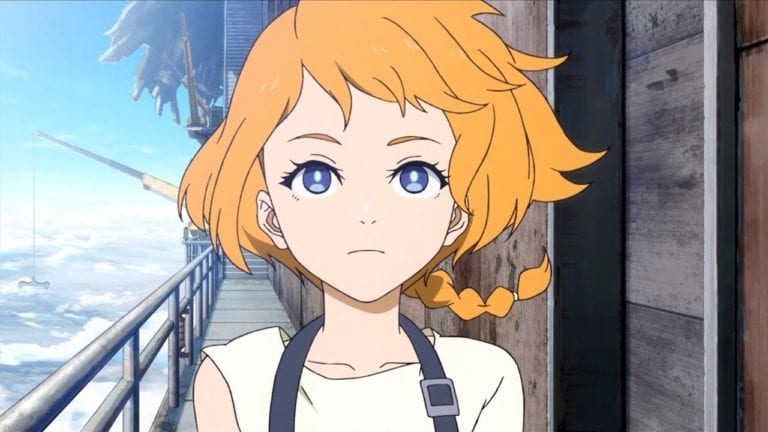 Deca Dence’s plot revolved around the last faction of humanity on board a moving fortress surviving and fighting back against the strange creatures responsibe for almost wiping them out. Or so we were led to believe. After the first episode aired, the critics were quick to label it as a cheap rip off of popular anime like Attack on Titan and common mecha tropes. But still the original anime conceived by Hiroshi Seko and Yuzuru Tachikawa showed promise.

However, the second episode of Deca Dence, titled “Sprocket” manages to exceed all expectations, dropping a massive plot twist that shook the very foundations of the world we believed the anime was set in. The right phrase to describe whatever we have seen in Deca Dence would be “dystopian capitalism.”

For starters, the second episode could very well be confusing as hell, with your brains scrambling around to get a grasp on what was happening.

Don’t be mistaken. Deca Dence does not take place in a virtual world. Humans are really a threatened species on the earth right now, thanks to Gadoll. However, a few possible “robot like aliens” with a capitalist mentality have decided to take over humanity on the verge of extinction and make them extras and pawns in their real life game world (you can see their spaceship hovering over the earth when the Deca Dence game commercial is being played). So rather than being the final bastion for the surviving humans, the Deca Dence is more like a colossal entertainment facility which is owned by the Solid Quake Corporation. And this entertainment facility *exists* in the continent of Eurasia (yes bois and gals that thing is real).

To understand everything correctly, lets take a look at the information presented to us in detail from the first episode.

From what the students are taught in their class (this could very well be false information that has been fed to humans by these “aliens”), when humanity was on the verge of exinction due to the Gadolls, the anti-Gadoll fight force called the “Gears” decided to pool their resources and build the moving fortress Deca Dence. The humans were granted refuge in the oxyone storage tank of the moving fortress and thus they managed to survive complete extinction.

Now the job of these humans was to support the Gears who in exchange protected them. They came to be known as Tankers. The tankers’ job included butchering the Gadoll meat after the Gears fought them, repairing the armour if it has been damaged and even carrying out the small maitanence activities on board Deca Dence. A very few of these tankers have been able to go on and join “The Power”, a military organization formed by the Gears. Its purpose is to fight the Gadoll and protect the Deca-dence.

However, the humans remain oblivious to the fact that these so called Gears are actually the avatars of these supposed aliens, for whom the Deca Dence and the Earth is a massive playground. This explains why most these Gears have a somewhat different appearance. The major selling point of the game is players being able to take part in real battles via these virtual avatars, which has made Deca Dence quite enticing and popular. Just like any other game, these players are ranked depending on their performance against the Gadoll. In exchange for higher rankings they seem to receive certain perks (a personal room, recognition and probably a better lifestyle). The fights of the Gears are broadcast in the General Corporation Chimney Town, a place where these players gather to play.

It goes without saying that the Solid Quake corporation is reaping huge profits thanks to the popularity of the game. It is also using the humans as free labourers and side workers who are a vital cog keeping their colossal entertainment hub, the Deca Dence, functioning. They are even being controlled by a micro-chip, though its functions are not really known at this point of time. However, there seem to be humans who have already begun doubting the strange world that they live in.

Natsume’s dad Moro was one such person. In the first episode he comes across a rusty robot body of the alien. This player was probably scrapped (that sweet process of removing the consciousness like thing from the head of these robots). Upon its discovery, his teammates suggest that his suspicions might have been true all along. While we are assuming these robot like thingies to be aliens, they could also be something entirely different. After all they too don’t seem to have their complete free will and act as things that are “owned” by the “company.”

From what we have seen, humans here have to escape from two things. From the jaws of the life threatening monsters called Gadoll and from the deep capiltalist clutches of the Solid Quake corporation, which essentially views humans as cheap labor. If you won’t call this story unique, then not many anime out there are capable enough of captivating your mind. There are many underlying themes, which are begging to be explored in the setting of the anime. While it would be foolish to comment on them already, we hope that the creators do a good job in maintaining the momentum of the show and not let its potential go to waste!