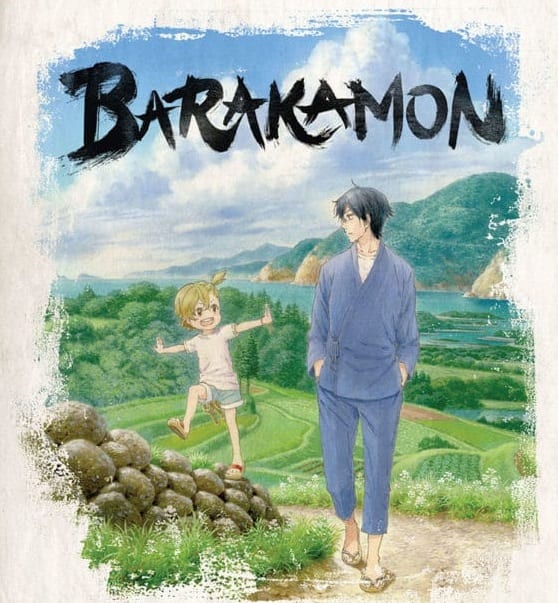 The most prominent quality of a slice of life show is that it consumes you into their world and makes you forget about the real one. You laugh alongside the characters as they do stupid things, you cry with them when they hit point-blank, and feel relieved when everything falls into place after falling apart. Barakamon does a remarkable job of highlighting this very aspect that we call the ‘slice of life’, doing complete justice to its genre.

Backed by a unique cast of silly and eccentric characters alongside an unorthodox and impactful storyline, Barakamon illustrates the life of a man who is on the path of self-discovery amidst rumbling hills of chaos.

Handa Seishu, a young calligraphy professional, after punching one of the judges who criticized his work; finds himself hastened away from Tokyo to a remote island as punishment. The show depicts the time period of Handa’s stay on the island with the unconventional villagers and the search for a calligraphy style that he can deem as his own.

Is it possible to live in a realm where chaos and order are best of friends?

The real hopeless victims are those who appear to be the most normal, living an orthodox and satisfying life. Handa is one of them. Living in his own delusions of grandeur, he tries to run behind the idea of ‘an admiration based on a dream’. There is no doubt that he is one of the best calligraphers but,

What does it take to be better ?

After arriving at the remote island, he finds himself in a desolate place. A place screaming of hopelessness. He tries to adjust himself to the stark reality. Now enters Naru Kotoishi, a six-year-old girl who will alter our calligrapher’s life forever. You see it is not about why Handa wasn’t able to un-leave the textbook style he was so used to, it was always about why he wasn’t able to move beyond. And the answer lies in Naru herself. The kid with a very jovial nature brimming with hope, was able to provide an unsought answer for our visitor on the island.

It is often the simplest of the things which spark an inspiration, like watching the night sky while lying on the meadows of an unknown land (with a broken leg) or roaming around with people who are much much younger than you while actively participating in all of their childish quests. It’s the simple stuff which matters the most. And our protagonist is there to comprehend that part of his life amongst the amiable villagers and over-enthusiastic children.

But to proclaim an art of his own, does one need to have an inspiration or it just pops out of nowhere from cloud nine ?

Talking about the animation, it’s pleasant. Nothing is off the chart or below it. The animation is as it should be i.e an incomplete delight. Don’t get me wrong here, the phrase suits it. The extent of the colour palette used is apparently not much, but everything just amounts to be fair enough to make a complete circle. Moving on to the soundtrack, I think that it could have been better. The OP and ED are a bang though. Every lyric and tune synchronized perfectly and easily manages to make my heart swoon.

Plus it pretty much stands out in the comedy. It’s subtle and genuine. The show never aimed to make you laugh, it just comes out naturally. It scores a perfect ten in the comedy aspect. The comedy oozes from the obscurities of the characters themselves.

So is it difficult to understand what life has for us in its Pandora’s Box ?

As the preconceived notion goes that the show is about a struggling calligrapher who is having a hard time dealing with the idea that he is not nearly as good as he thinks he is.

But is it about that at all ?

‘Barakamon’ is about an earnest guy who is lost in the void of desperation and guilt, encapsulated by nihilism, he tries to run away from the truth instead of facing it head-on.

But that’s what makes him realistic and grounded at the same time. Hence more relatable. Thus coming off as more human. Because the way we are built as human beings are in contradictions and paradoxes.

A quirk which can be found in all of us perhaps.

Still, is this really the way we intend to live ?

In all, ‘Barakamon’ shows you that you don’t need love triangles, mages or aliens in order to create a mesmerizing anime. ‘Barakamon’ is not a tale of a couple finding true love or the good triumphing evil. Rather it’s an example of how our monotonous lives have a story to them too,

a story which is enough for people like us,

a story which just seems perfect,

a story which is curated for us,

even if it involves being tormented by children.

The greatest sin is that there isn’t more of it to watch. An incomplete delight yet complete in itself. A true definition of what a slice of life anime is or simply put, how it should be.

So, I will ask it again,

What does it take to be a better calligrapher ?

There will come a day when people will realize the brilliance of Tatsuki Fujimoto. Till then Kakushigoto, animanga and oreo shakes.