The movie is set to release on Netflix on 28th April 2022, globally. 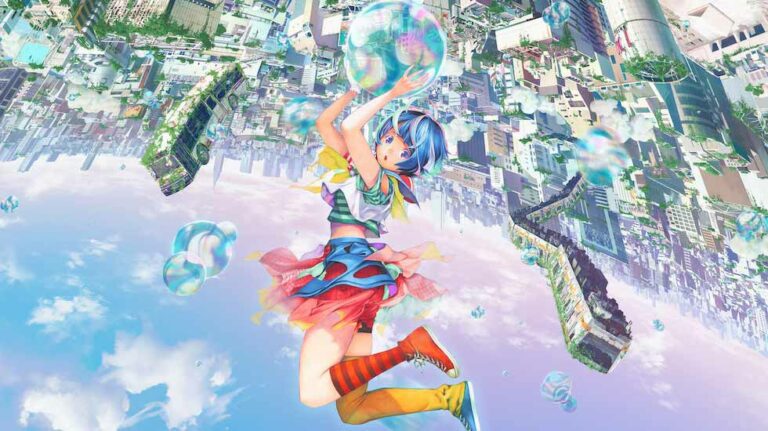 Wit Studio’s new original Anime film Bubble‘s new trailer was streamed by Warner Bros. Japan on Thursday, April 7, 2022. The trailer gives more insights into the story of the movie. It emphasizes on the song that only Hibiki and Uta can hear according to the story.

The movie is set to release in Netflix on April 28 2022, globally. However it will release on May 13 in Japanese theatres. Furthermore, the opening song of the anime is performed by Eve. The song is named “Bubble feat. Uta”. In addition, the ending song “Jaa ne, Mata ne” is performed by singer-songwriter Riria.

The latter began gaining fans on Tiktok and Youtube after she started posting songs without revealing her face in 2019. She has garnered over 1.7 Million followers across various social media platforms.

In addition to singing the ending song, she will also be debuting in voice acting for the female lead character, Uta.

The director Tetsuro Araki and producer Genki Kawamura encouraged her to take up the role. The poster above reveals the list of characters in the film till now. The name of the characters and their voice actors are as follows: ( To be read Left to Right) The movie is directed by Tetsuro Araki of Attack On Titan fame at Wit Studio. The scripting is done by Gen Urobuchi of Fate/Zero, Psycho Pass fame. The character design and music composition is done by Takeshi Obata of Death Note and Platinum End fame, and Hiroyuki Sawano of Attack on Titan fame, respectively.

The movie was featured at the 72nd Berlin International Film Festival on February 10-20, 2022 as an official selection of the Generation 14plus section.

The story is set in Tokyo, after bubbles that broke the laws of gravity rained down upon the world.

Cut off from the outside world, Tokyo has become a playground for a group of young people who have lost their families, acting as a battlefield for parkour team battles as they leap from building to building.

Hibiki, a young ace known for his dangerous play style, makes a reckless move one day and plummets into the gravity-bending sea. His life is saved by Uta, a girl with mysterious powers. The pair then hear a unique sound audible only to them.

Why did Uta appear before Hibiki? Their encounter leads to a revelation that will change the world.