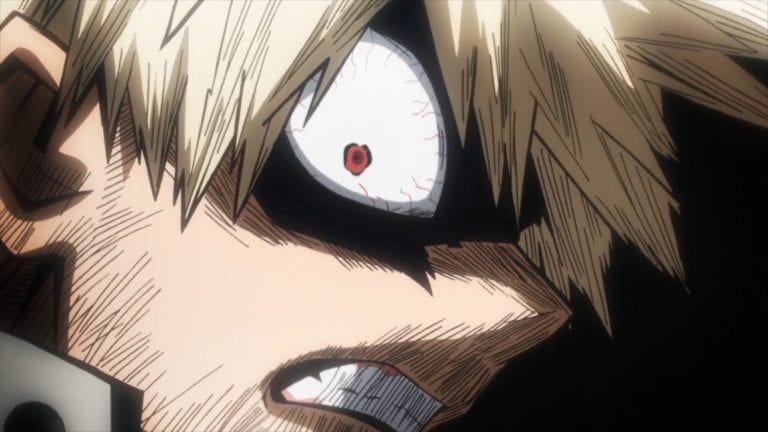 Ever since the war between the Paranormal Liberation Army and Pro Heroes started there have been major death flags for major heroes like Endeavour, Aizawa, Gran Torino, Midnight, etc. In this never-ending list one more big name has been added. It is none other than our very own beloved prick Katsuki Bakugou.

He reminiscences on their past. He cares for him just the way All Might cares for Deku. He understands the path Deku is on and also the hardships that are gonna come along the way. And eventually, he has pledged to help Deku on this path and stand by him.

For once, Bakugou has swallowed his pride and is making progress to be a better Hero. This maturing thought process and the bravery displayed by Bakugou in the latest chapter has got us thinking whether the young hero will meet a terrible fate after the events of the latest chapter.

Katsuki Bakugou is currently alive in the My Hero Academia manga. However, he has suffered major injuries after protecting Deku from Shigaraki’s mindless attack.

In the latest chapter, we saw Bakugou fighting alongside Deku. The latter is using his broken body over and over again to beat Shigaraki. He’s using One for all at 100% all the time and still the young hero hasn’t given up. To make things worse, All For One has manifested in Shigarakis’ body.

Even after getting charred by Endeavour’s Prominence Burn, Shigaraki still stands. He used blade-like things to stab Endeavour. He then proceeds to attack Deku calling him “Little Brother”. Attempting to steal one for all, All for one sends out those blades once again. This time, due to being tired and having broken most of his body, Deku is unable to move. And in that instance, Bakugou jumps in and takes the attack on himself, getting stabbed all over.

Bakugou’s character seems to have come a full circle. From bullying Deku, to resenting his power and finally accepting him. From being saved by Deku, to saving Deku in a very similar way. Bakugou has got over his inferiority complex and has gone on to be a real hero!

Could this be the moment in which Deku loses his childhood friend? However, if Bakugou really dies, this could be a new character arc for Deku, as his anger takes over him.

Or it could end up in a situation similar to the Heroes Rising movie. Where Deku gives his One For All quirk to Bakugou.

From the current situation it is pretty evident that the villains are on the verge to win. Both the number one Hero and Bakugou dying could be the biggest blowback and the perfect scenario to exact revenge for our heroes and Deku. This would also give them a chance to understand the loopholes in the hero society and an opportunity to build it better.

What do you think will happen if Bakugou dies? Let us know in the comments.

11 thoughts on “Will Katsuki Bakugou Die In My Hero Academia?”