Have you ever wondered whether titans resemble the humans they were before? For example, the Female Titan shares the icy blue eyes and blonde hair with its current inheritor, Annie. Similarly, the Jaw Titan now shares the appearance of its current inheritor who was introduced in the latest episode. And it is this new look of the Jaw Titan that has been subject to many discussions regarding titan appearance.

Infact, there was visible confusion when the Jaw Titan first made its appearance with fans speculating if it were a new titan altogether. However, it is no new type of titan: it’s the same old Jaw Titan, now inherited by someone else.

But before going into details about the appearance of the titans, lets take a look at who the Jaw Titan currently is.

So, who is the new Jaw Titan?

The Jaw Titan we see in the initial episodes of Attack on Titan Season 4 is inherited by Porco Galliard. Porco is the younger brother of Marcel Galliard.

The Jaw Titan is one of the nine intelligent titans that split from progenitor Founding Titan. It first belonged to Marcel Galliard. However, he was eaten by Ymir in her mindless titan form. She later enters the walls and joins the 104th Cadet Corps. Ymir had the Jaw Titan for the first three seasons of the anime.

Marcel actually got eaten by Ymir as he tried protecting Reiner. Due to this Porco’s grudge against Reiner only grew worse.

Porco believed he was a better candidate to become the Armoured Titan. His dislike of Reiner only grew when he got to know that Marcel was eaten in Reiner’s place. Porco is definitely a brash, young man. Despite so, Porco is a skilled fighter who always protects others who are in a pinch.

What happened to Ymir? When was she eaten?

Most seem to have forgotten what happened to Ymir. Once she willingly went with Reiner and Bertholdt, she makes up her mind to give up the titan. It is a very noble deed on her end, to finally give back what she stole.

How does she willingly give it back? By surrendering herself and allowing to be eaten. Porco ate Ymir to get the Jaw Titan’s power when she goes back to Marley based on her agreement with Reiner & Bertholdt. This incident happens before the end of Season 3 itself. While Ymir’s ideology and actions leave a great impact on us, and Historia, we finally had to bid goodbye to her.

True to the concept of inheritance, now Porco can see fleeting memories of Ymir. This is exactly how he sees what Reiner does and accuses him of trying to be a second-hand Marcel.

Why was Ymir’s Jaw Titan different?

The biggest question posed by fans about the Jaw Titan is why both Ymir’s and Porco’s versions are different in looks. This question becomes more relevant when we realise Porco’s Jaw Titan looked almost similar to Marcel’s. So why was Ymir’s Titan the odd one out of the two? Especially because her titan form lacked the white mask-like structure which was common in Jaw Titans.

The reason why Ymir’s Titan is different is because she spent a lot of time in her mindless Titan form. This made her intelligent titan look the same, instead of developing its own unique features. Now lets a look at this in detail.

I think we all agree that titans do inherit some features of the person. For example, Eren’s Attack Titan looks different from the Attack Titans of Grisha Jeager and Eren Kruger.

For example, Kruger’s Attack Titan has the same shade of hair, Grisha’s titan has a beard like his own, and the reason why Eren’s titan has protruding teeth is because of how his mindless titan looked.

Similarly, we can argue that the Jaw Titan looks different because obviously, Porco and Ymir look very different. Ymir’s titan has brown hair matching her own, while Porco’s titan has blonde hair. The reason why Ymir’s titan doesn’t have a beard most probably has to do with her being a female.

The time you remain as a mindless titan

Ymir’s Jaw Titan looks the same as her mindless titan form. This means that the time one spends as a mindless titan matters. Also, the features of the mindless titans sometimes reflect in the appearance of the intelligent titan. Let’s take a look at Eren for example.

His mindless and intelligent titan look very different, the only thing they share is the teeth. If Eren were to remain a mindless titan for, let’s say, a year, then even his Attack Titan would look similar to his mindless titan.

One thing to also consider is that Porco probably remained a mindless titan for a few minutes before he devoured Ymir. On the other hand, Ymir remained a titan for over 60 years! This means her mindless titan appearance is ingrained into her. Therefore, there is not a very big change between Ymir’s mindless and Jaw titan.

In conclusion, the time you remain as a mindless titan and your appearance influence how the titan looks. If not anything else, this argument definitely applies to the hair colour and facial hair placement in a titan. There are also theories about how the hardened face on Galliard’s titan could be a result of the experiments that Marley carried out on their Titans. While that again is something not confirmed, the time spent as a mindless titan seems to be the most obvious reason here.

What are your thoughts on Ymir’s Jaw titan looking different? Let us know your opinions in the comments section! 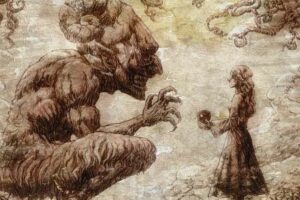