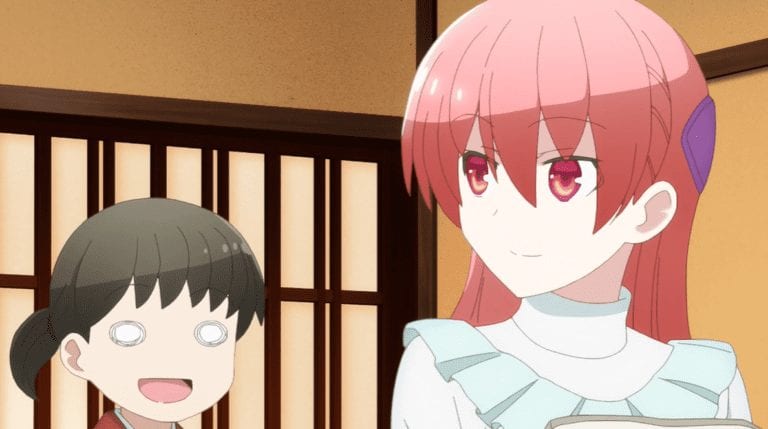 Woohoo!! Our favourite married couple Nasa-kun and Tsukasa-chan have set out for their first trip together. Destination Nara. Their actual intention is to meet Nasa Yuzaki’s parents, but it’s going to be more like a honeymoon trip to Kyoto.

Continuing from Episode 6, the newlyweds have taken the night bus on Mrs.Yuzaki’s suggestion. It seems as the trip starts rolling, Tsukasa’s eccentricity towards certain priorities like trying new dishes at the Late-night Service Area have completely surprised Nasa to the core.

The little expectation vs reality joke on the “Hirunendesu!- Lime udon” was so relatable that it will certainly bring out a smile on your face. Nice job Kenjiro sensei !!

Oh, of course, Tsukasa chan and Nasa would have such opposite interests, and it’s just what is needed to fuel the Narita Divorce plot Chitose has been planning to witness! It was almost going to a rift when Tsukasa was going to turndown Nasa’s dream to roam about Kyoto with her wife.

Oh Nasa, you’re such a nerd. But still Tsukasa showed the good wife side and agreed to play along. Yare yare…

It’s intriguing that Tsukasa has been portrayed as a modern otaku girl with a quirky interest in cafes and manga museums. But did you notice that she also knew how to wear a kimono? Well, its not common you know. I sense some mystery!

This episode was already too “moe” to begin with, but Nasa-kun’s explanation of Drake’s equation to find his soulmate in 0.000034% chances will render you in tears. The perfect answer to what is love at first sight.

The difference in taste of these love birds was expected to turn bitter into what Chitose has mentioned as “ Narita Divorce”- a short lived marriage which ends just after honeymoon. But it seems that these differences are making each other fall in love more! Well as the famous proverb goes, “ Opposites attract”.