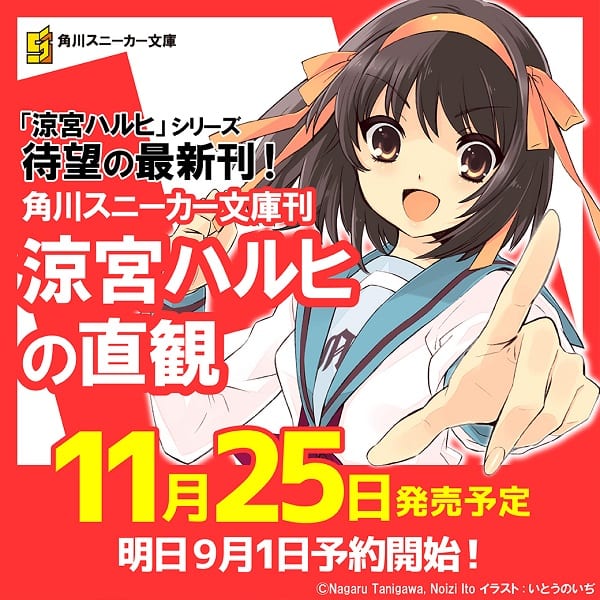 On Monday, the official twitter account of the Franchise, The Melancholy of the Haruhi Suzuniya made an announcement that on November 25, the Japanese Publishing Giant Kadokawa is going to publish a new novel in author Nagaru Tanigawa and illustrator Noizi Ito’s original novel series.
The new novel mentioned above will have the title as “Suzumiya Haruhi no Chokkan” which can be perceived in English as “The intuition of Haruhi Suzumiya”.

This will be the first new novel in a long time of approximately Nine and half years for the said Franchise while the Pre-orders for the new novel start on Tuesday. The novel will be released digitally by Yen Press on the same day it launches.

The new novel will have three stories in total which will contain one completely fresh story. The book will contain “Nana Fushigi Overtime” (English : Seven Wonders Overtime), a short story that debuted in 2018 in Kadokawa’s one-time The Sneaker Legend Magazine. The second story will be “Atezuppo Numbers” (English : Guesswork Numbers), which is a short story from the artbook of Noizi Ito which was published by Kadokawa in 2013. The name of new story is “Tsuruya-san no Chosen” (English : Tsuruya’s Challenge). The full novel is declared to have more than 250 pages, ANN reported.

The plot of anime follows an ordinary high school student Kyon who doesn’t believe in aliens, time travellers or espers and Haruhi Suzumiya who is actually interested and wants to meet those extra-ordinary beings. In pursuit of a fun ambition, Haruhi creates a club, more accurately an SOS team in the school and Kyon finds himself dragged in Haruhi’s activities. She recruits new members for the club but it turns out that the new club members are actually agents of fantastic organizations who are ordered to keep an eye on Haruhi because she secretly has a superpower to create new universes at her own will.

Although The Melancholy of Haruhi Suzumiya Premiered its First Season in 2006, it was not in a linear order. Thus it was rebroadcasted with possibly correct chronological order and new episodes in 2009. The first and second seasons of the show were animated by Kyoto Animation Studio.

Even though the License of both the series were owned by Bandai Entertainment, The anime was Re-released by Funimation in 2016. Author Nagaru and Illustrator Noizi published a total of 11 novels from year 2003 to 2011. The light novel series has more than 20 million printed copies. The entire series was released in 10 volumes from 2009 to 2013 by ‘The Little, Brown Books for Young Readers’ imprint and ‘Yen Press’.