Talentless Nana Episode 7 Makes Us Believe In The Series 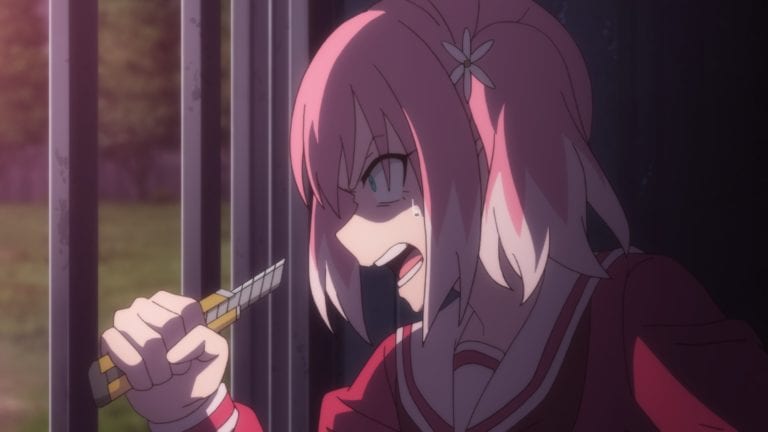 The Necromancer part 2 delivered better than I expected to be honest. There’s one undeniable truth for characters in Talentless Nana, play safe and lose.

Nana proposes a deal to Yuuka, trying to change the dire situation she is in by telling what Shinji is whispering to her and our not-so sane person agrees!

It’s hilarious how she says “He’s saying to kill Nana” and escapes.

We know that Nana can’t read minds but her ability to understand body and behaviour moments continuously works really well. She is already preparing for her next plan, by trying to provoke Yuuka into chasing after her.

After playing mouse and cat on the island for some time, we have another plot twist! What could a necromancer find in an abandoned island? A dead person who had a night vision ability? Yes and a lot more bodies. This foreshadows that Nana is completely expendable; a lot of “talented” have been killed by the “talentless” and vice-versa; an endless cycle.

She has a brief moment of suspicion as she is surprised by the fact that her predecessors exist; yet another moment which builds towards a bound to happen moment where she has to choose between the “talented” and the “talentless”.

Later on, our pink-haired serial-killer gets trapped inside the shed she was using to protect herself after a classic “did you check under the bed?” scene.

I might be an overthinker but I am certain that nobody would let their potential killer have even the slightest bit of chance to succeed, Yuuka just casually goes to school after locking the person who tried to kill her, what a goody-two-shoes.

While all of this is quite a cliche, it does foreshadow the ego and arrogance in the “talented” people, which stems from being placed on a pedestal as the “saviours” of humanity.

However, our deceptive leader manages to steal the spotlight yet again with her 200 IQ moves.

Her plan to act trapped, escape and then make her move according to Yuuka’s actions and sudden reappearance in the morning and dragging Yuuka into a corner literally and physically, she manages to break our freaky necromancer down completely.

This was a redeeming point as she was too overconfident at the end of the last episode, which led to such complications.

While the reveal of Yuuka’s true identity was great, it managed to highlight our serial-killer protagonist’s personality well. She only pretended to throw Yuuka’s valuables and also cross-questions her decision of killing the stalker-necromancer if she was a nice person; which proves why she had a rather long conversation with Yuuka before killing her.

The best thing about the show so far is that the show isn’t just Nana being a complete genius 24/7, she overlooks through things at times, makes mistakes while proving her points (especially against Kyouya) and the fact that Nana isn’t the only one who has dark secrets.

IMP NOTE: I don’t believe that Nanao and Yuuka are dead, as this would be a rather common thing plot twist and the same can be said for the other two however I highly doubt those. It will be interesting as to how they would be introduced into the story again.