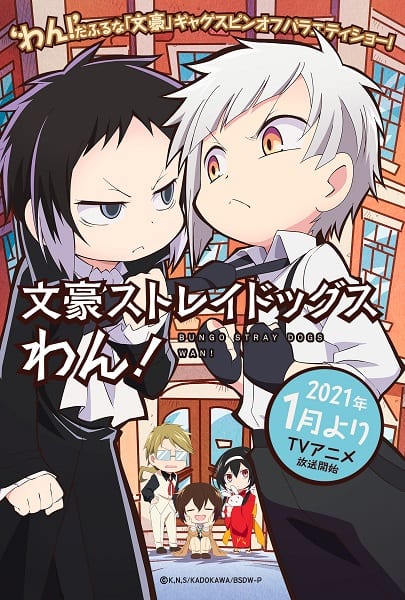 TV anime “Bungo Stray Dogs Wan” begins airing from January 2021, the official website announced on Wednesday. The anime is based on a spin-off manga of Bungo Stray Dogs. It is being animated by Bones and Nomad.

The comedy spin-off anime is written by Kafka Asagiri and illustrated by Sango Harukawa. The franchise also announced the anime’s cast, staff, and unveiled a new visual for the anime.

Satonobu Kikuchi is directing the anime at Bones and Nomad, Kazuyuki Fudeyasu is in charge of series scripts and Hiromi Daimi is the character designer.

Cast reprising their roles from previous time are:

Bungo Stray Dogs anime is based on seinen manga series written by Kafka Asagiri and illustrated by Sango Harukawa, which has been serialized in the magazine Young Ace since 2012. The series follows the members of the “Armed Detective Agency” throughout their everyday lives. It focuses on the weretiger Atsushi Nakajima, who joins others gifted with supernatural powers to accomplish different tasks including running a business, solving mysteries, and carrying out missions assigned by the mafia.

This manga inspired a smartphone game that launched in December 2017. Ambition released this game in English in July 2018. Crunchyroll began streaming the film in September 2018 and later took over publication of the game in November 2018. An OVA shipped with the manga’s 13th compiled volume in August 2017.

Yen Press is publishing the manga and novel series in English.