One Piece: An Epic Fight Of Divas Being Set Up?

One thing that chapter 1004 of One Piece managed to set in stone was the upcoming showdown between Black Maria and Nico Robin. And its high time we saw the latter going all guns firing in a duel! 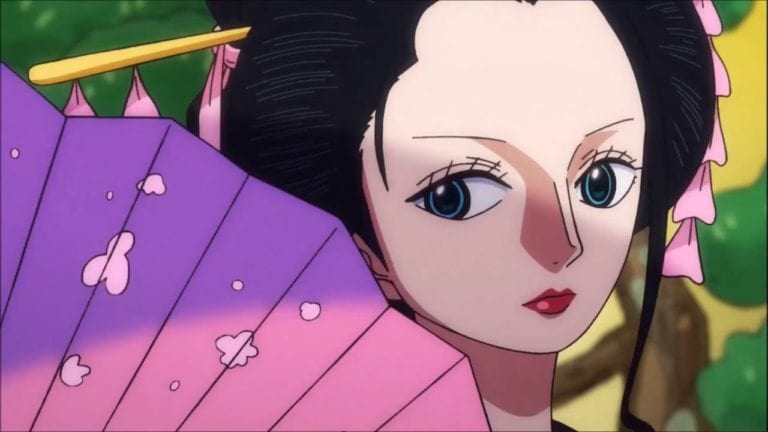 One thing that chapter 1004 of One Piece managed to set in stone was the upcoming showdown between Black Maria and Nico Robin. The giant spider lady is shown to be on the lookout for Robin (why we wonder). Baiting Sanji was her way of luring in the ultimate prey.

However, Sanji refuses to give into Black Maria’s demands, atleast for now.

“Underestimate Nico Robin at your own peril,” he said; as Black Maria revealed her amicable plans for Nico Robin. The Spider Diva had just expressed her twisted intentions to mutilate Robin of the Strawhats and kill her in an R-rating style.

What Black Maria saw as an opportunity to end Nico Robin, the humble One Piece fans pictured this as a potential battle. A fight between a lady who can walk 8 steps at the same time and an archaeologist who is a “handful.” 2 divas battling it out in a full moon night. If that happens, then we are declaring Oda as the senpai of all time.

But how will this battle play out? What will be the implications of this fight? and most importantly;

How will this Battle begin?

Well, for starters, we are well-familiar with Black Maria’s desire to end Nico Robin. She asks Sanji to call Nico Robin so she could deliver the ultimate punishment.

But our lady Black Maria receives a word of advice from Sanji to not underestimate the archaeologist of the Strawhats. But this spider just never listens.

Now, we can assume the fact that Black Maria would kill Sanji if Robin does not shows up. On the side of Nico Robin, she is not the type who would abandon her Nakama. So, Black Maria could potentially hear that magical word – Clutch!

Ever since the timeskip, we have been waiting for Robin to show her true power. She is perhaps the only member in the crew who hasn’t taken up a serious fight. This might change that.

We know that Nico Robin trained with the Revolutionaries. So, she might have some interesting tricks up her sleeves. We are pretty sure this would be a stimulating matchup, to say the least.

The Implications of the Battle

Black Maria is a big girl and we mean that in a very literal sense. So, could it be that her origin is connected with Elbaf, the land of the Giants? If that assumption hits the point then Strawhats might learn some unheard details about Elbaf.

During her fight with Black Maria, Nico Robin could catch some hints about the mysterious country of giants. After Wano Kuni, Elbaf could be the next destination for Strawhats.

It is quite possible that the final Road Poneglyph is resting in Elbaf. Who knows? Apparently, Black Maria does. It also comes as viable speculation that Black Maria is in fact a spy for Marines or CP0.

She is a complex character if we put it like that. Her interests and agenda have been vague and unclear. Plus, her particular interest in Nico Robin raises eyebrows. Marines want Nico Robin dead as they consider her to be “evil.” But what’s Black Maria’s excuse?

So, what do you think of the battle between Black Maria and Nico Robin? Can Black Maria really defeat Robin? Will Robin be able to survive her encounter with the Spider Lady? Let us know what you think in the comment section down below.