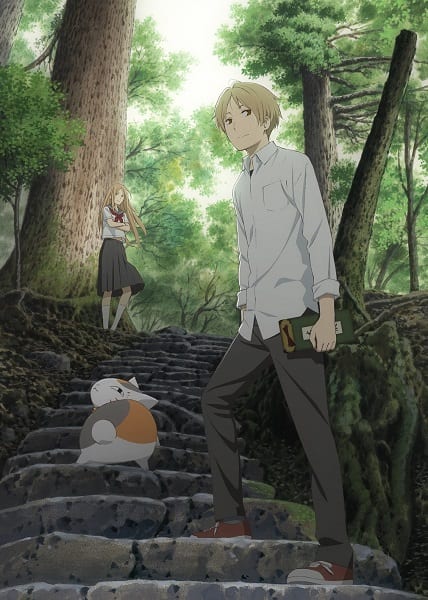 On Saturday the Natsume’s Book of Friends franchise announced that their new anime “Natsume Yuujinchou: Ishi Okoshi to Ayashiki Raihousha” will open on January 16 in Tokyo’s Shinjuku Wald 9 and other theaters. The website also announced that Hisako Kanemoto will guest-star as Mitsumi and also posted a new key visual.

Participating theaters will start offering special ticket passes with this visual next Saturday, and each pass will also come with a postcard.

The film is a combination of two stories: “Ishi Okoshi” and “Ayashiki Raihōsha.” In “Ishi Okoshi,” Natsume meets a small yōkai called Mitsumi in a forest. Mitsumi is entrusted to wake up the divine yōkai “Iwatetsu” from its deep slumber. Mitsumi weighs on Natsume’s mind, so he sets out to help Mitsumi with his task. In “Ayashiki Raihōsha,” a mysterious visitor appears in front of Tanuma. Nearly every day, the visitor visits Tanuma, talks to him a little, and then leaves. Natsume, who knows the visitor is a yōkai, worries for Tanuma, but Tanuma enjoys these exchanges with the yōkai. The yōkai means no harm, but Tanuma’s health slowly starts to deteriorate.