Urasawa had been nominated for the same category in the last Max & Moritz Award in 2020 which was cancelled due to the pandemic situation. 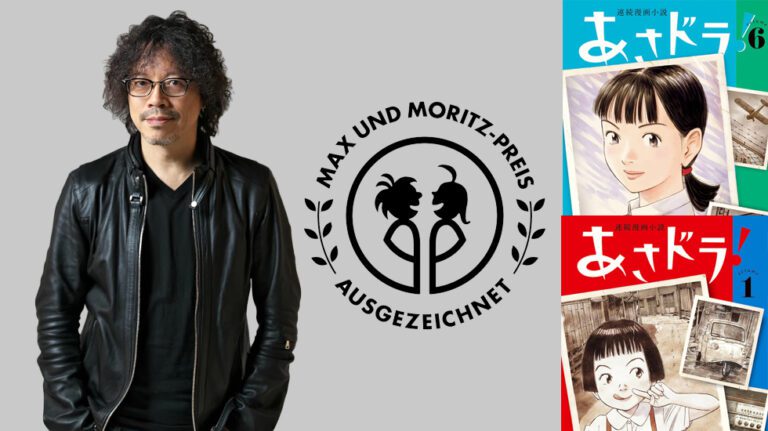 Naoki Urasawa, the mangaka of Monster and 20th Century Boys, was bestowed the Max & Moritz “Lifetime Achievement Award” at the 20th Erlangen Comic Salon, making him the first Japanese author to win the award.

Urasawa was delighted to receive the award and expressed his gratitude to the German readers for loving his work.

Germany was also the setting for my work “MONSTER”, so I visited the country several times for interviews and felt very connected to it.

As a Japanese, I thought it was a frivolous challenge for me to portray Germany and have it read by Germans, but I am more than happy that my work was read warmly and that they were familiar enough with it to give me such a beautiful award this time.

I am very proud of the worldwide exchange we have made in this way.

Thank you very much to all those who contributed to the award and to all the German readers who liked my work.

I will continue to draw.

Urasawa had been nominated for the same category in the previous Max & Moritz Award in 2020. It was however cancelled due to the pandemic situation. He was then approached again this year to receive the special “Lifetime Achievement Award”.

Urasawa, touted as one of the artists that changed the history of manga, has won numerous awards, including the Shogakukan Manga Award three times, the Tezuka Osamu Cultural Prize twice, and the Kodansha Manga Award once. By December 2021, his various works had over 140 million copies in circulation worldwide.

The Max und Moritz Award is the most important award for graphic literature in the German-speaking area. It is awarded biannually in the course of the International Comic Salon by an independent jury of professionals, appointed by the city of Erlangen, and has played a decisive role for the artistic and social recognition of comic art for around 40 years.

The Max und Moritz Award is presented in the following categories: