Studio Colorido’s second official anime feature film, Nakitai Watashiwa Neko O Kaburu (Wanting to Cry, I Pretend to Be a Cat) will be delayed due to the coronavirus pandemic in Japan.

The film was set to open in Japan originally on June 5,2020. A new release date would be announced by the studio on its official website and twitter account as soon as it is decided.

“Regarding Nakitai Watashiwa Neko O Kaburu that was scheduled to be released from June 5, 2020, we decided to postpone the release date in consideration of the situation of new coronavirus infection,” the message on the official website of the movie said. “We would like to express our sincere gratitude to everyone who was looking forward to the release of the work. As soon as it is decided, we will announce the future release schedule on the official website of the animated movie.”

The movie, co-directed by Junichi Sato and Tomotaka Shibayama is about finding one’s true self. It follows Miyo “Muge” Sasaki, a peculiar second-year junior high student who has fallen in love with her classmate Kento Hinode. Muge resolutely pursues Hinode every day, but he takes no notice of her. One day she finds a magical mask which transforms her into a cat, letting her get close to Hinode, however, the mask would one day make it unable for her to transform back into a human. 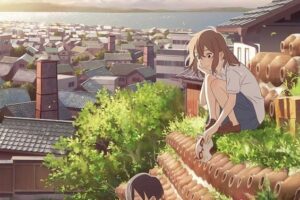