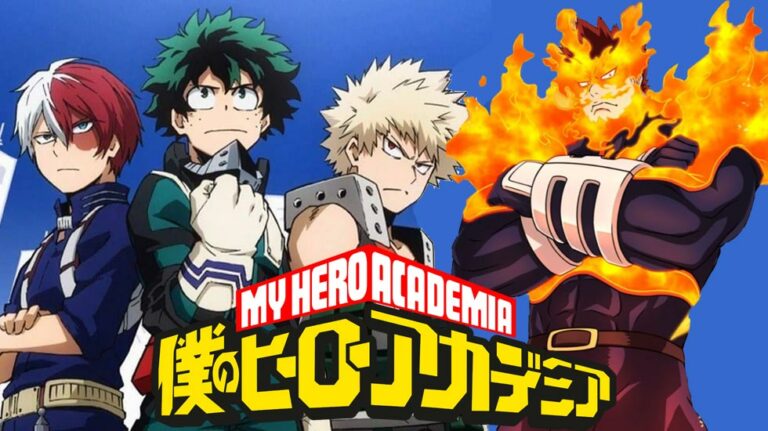 The official website of My Hero Academia anime revealed that the second of the previously announced two OVAs for the franchise is titled ‘Laugh! As If You’re In Hell‘. A new key visual was also released for the OVA featuring pro-hero Endeavor along with Deku, Katsuki Bakugo and Shoto Todoroki.

Endeavor’s sidekick Burnin is also seen in the visual.

The OVA is chronologically set in the timeline of the Endeavor Office Intern Arc from the fifth season of the anime, and deals with an incident that takes place in Endeavor’s jurisdiction during this time period.

The first OVA, titled HLB, will revolve around a baseball game involving the pro-heroes and students with the rule that the players can use their quirks. A key visual was revealed for HLB on May 9, 2022.

‘Laugh! As If You’re In Hell’ will be pre-screened, along with ‘HLB’, in Japanese theatres from June 16 – June 19, 2022 in commemoration of the Hero Day which is celebrated on June 16 in Japan every year. The episodes will be screened in ten theatres across Japan, including the TOHO cinemas in Shinjuku and Ikebukuro.

The ticket sales will begin from June 14, 2022 at the theatres where the episodes will be screened. Theatre goers will receive a double sided postcard featuring visuals from both the OVAs, Laugh! Like Hell and HLB, as a bonus gift.

On June 19, before the screening of the OVAs, a special stage event attended by Deku’s voice actor Daiki Yamashita and Shota Aizawa’s voice actor Junichi Suwabe will be held at TOHO cinemas in Roppongi Hills. The actors will speak about the production of the two OVAs and also reveal details about the upcoming My Hero Academia Season 6, which is set to air in fall 2022.

My Hero Academia is a Japanese superhero manga series written and illustrated by Kōhei Horikoshi.

As of January 2022, My Hero Academia has over 65 million copies in circulation worldwide.