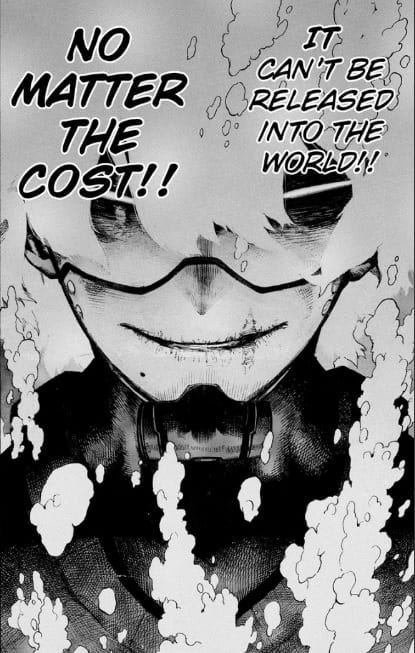 My Hero Academia manga chapter 268 titled “scramble” is out and it picks up right from the thick of the things. You can read the chapter for free on Viz.com.

As soon the assault started on the hospital the Heroes were attacked by various Nomus and villains accumulated by the Army who were also working in tandem with the League Of Villains.

Mirko the rabbit heroine was the only one able to follow the evil Doc creating Nomus inside his secret laboratory amid the attack. The Doctor Kyudai Garaki, also better known by his villainous alias Daruma Ujiko, now scared that Mirko might destroy all his life’s work decided to unleash the Upper Level of Nomu which he was saving for the last. Although these Nomus are not being fully ready they are still pretty strong to sustain kicks from Mirko the number 5 Pro Hero.

While inside the lab fighting Nomus Mirko finds out that Shigaraki Tomura is inside one of the tubes getting an genetic upgrade who was already able to improve his quirk during his fight with the Liberation Army before and her animal instincts tell her not to mess with him at all cost.

The latest chapter starts with Endeavour figuring out a shortcut to the lab Mirko is fighting in. On his way he finds Hero Crust struggling with multiple Nomus due to their regenerative capabilities. Endeavour easily one shots two of them after EraserHead erases their quirk. The third Nomu clearly an upgrade from the previous Nomus thinks as to why couldn’t it use its quirk and figures out EraserHeads Quirk launching an attack on him with its Acid Barrage. Thanks to Endeavour they are able to beat this Nomu too.

Meanwhile Mirko is struggling fighting so many Nomus at once and then decides to end Shigarakis Genetic Evolution midway although which is shown to be 75% complete till now. She leaps to destroy the vault with her kick; she is instantly attacked by one of the Nomus tentacles which stabs her leg and stops her midway as her other leg only slightly damages the vault/tube. Seeing Mirko being stabbed Endeavour jumps into the fight and destroys it.

In the end,Mirko, injured from fighting this long, tells Endeavour, Present Mic and EraserHead about Shigaraki being present there inside the tube and tells them to stop Him at all cost.

Mirkos reaction and her animal instincts kick in, showing us how much Shigaraki has immensely grown powerful and is still continuing to do so thanks to the genetic mutation going on over him. The next chapter might show us the true terrifying powers of Shigaraki Tomura and how the Heroes will have to deal with him. Meanwhile Deku and others are present at the Headquarters of the Liberation Army.

Our belief is that this is gonna be another epic level battle with the Pro Heroes fighting and winning but not at a low cost. With Tomura now able to manifest his true powers even with all the memories of his childhood he is another level of danger. He can control his quirk at a large range and doesn’t need to cover his opponent with all his five fingers or even direct contact. He can easily disintegrate anyone and everyone with a single movement of his arm.

This could pose a problem to the heroes. There also seems to be indication of Death of one of the Leading Heroes similarly to what happened with Sir Midnight while rescuing Eri. We are just Hoping it isn’t Aizawa sensei or Family Man Todoraki or Present Mic. As they say, Hope for the Best and Prepare for the Worst. We are wondering what role Class 1-A,1-B and other school Heroes will play in this epic fight and to how will Deku with his developing Quirks and physical limitations come up with a way to stand victorious.

Chapter 269 of My Hero Academia will be delayed due to the effects of COVID-19 spreading in Japan. The new release date of the chapter is now April 26! 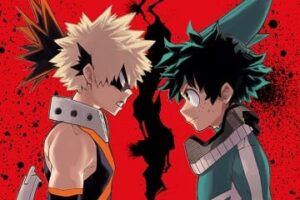 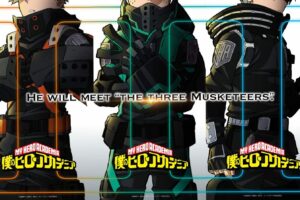 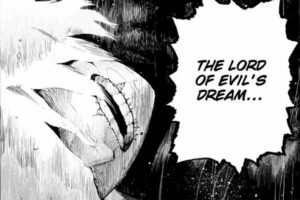