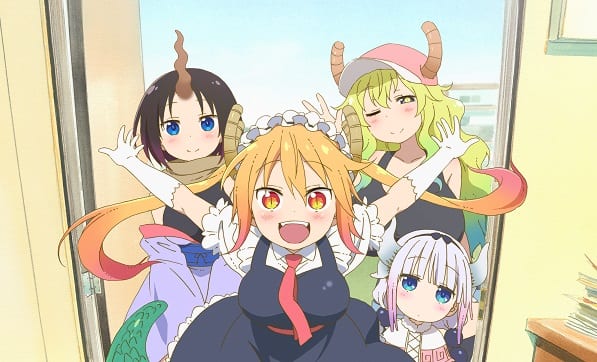 Miss Kobayashi’s Dragon Maid’s second season premiere has been confirmed. The official website of the anime revealed that the second season will air in July 2021. They also released new visuals of the upcoming anime. A new character, Iruru, is also present in the new visuals.

Iruru has already made an appearance in the manga.

Miss Kobayashi’s Dragon Maid is based on the manga series written and illustrated by Coolkyousinnjya. The series began serialization in Futabasha’s Monthly Action magazine since May 2013. The series has inspired four spin-off manga. An anime television series adaptation by Kyoto Animation aired in Japan between January and April 2017.

The official site for Miss Kobayashi’s Dragon Maid describes the upcoming season 2 as :

That messed up dragon maid is back! Dragon Tohru
has decided to work as a maid for Mr. Kobayashi for some reason.
Although she sometimes (lie, a lot) bothers her beloved Mrs. Kobayashi, she
managed to blend in with human society
and did a good job (lie, decent) in the maid business.
The same dragons, Kanna, Lucoa, Fafnir, and Elma, also
found their place
and enjoyed cross-species communication with humans.
It was around the time when I was spending turbulent days.
A new dragon threat attacks Mr. Kobayashi―..