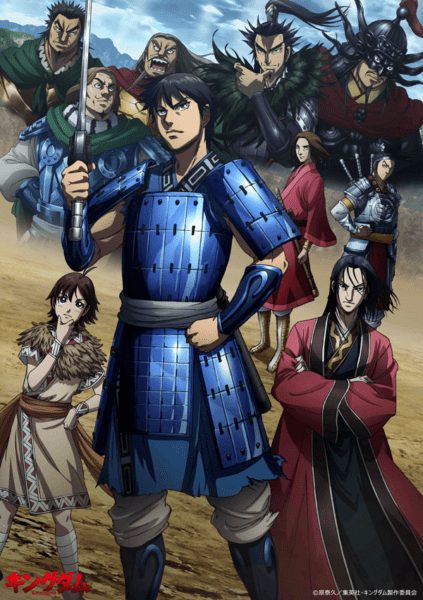 The official website of Kingdom anime revealed on Monday that Season 3 of the anime will resume its broadcast from Spring 2021. The production team wrote on the website that they will work diligently to complete the work of the third season and at the same time take care to not risk the health of the staff and cast.

Kingdom Season 3 had originally begun airing in April 2020. The anime however was delayed from the fifth episode which was supposed to air on 3rd May 2020. The activities of the production team were greatly affected due to the emergency declared in Japan to stall the spreading of the COVID-19 virus.

The anime is being directed by Kenichi Imaizumi at Studio Pierrot and St. Signpost. Noboru Takagi is in charge of series composition. Music for the season is being handled by Hiroyuki Sawano and Kohta Yamamoto. Hisashi Abe is in charge of character designs while Takumi Endo will serve as the 3D director.

Kingdom anime is based on the manga series written and illustrated by Yasuhisa Hara. The manga has been serialized in Shueisha’s Weekly Young Jump since January 2006 and collected into 59 tankōbon volumes as of September 2020. The story of the anime follows slave boy Xin, who dreams of becoming a great general for the state of Qin. Xin helps Ying Zheng, the young Qin king who shares his desire to unify China, rise to power within the state.

The manga has also inspired a live-action film by Shinsuke Sato which released last year in Japan.