“7FATES: CHAKHO” with BTS and “DARK MOON” with ENHYPEN released over the weekend. 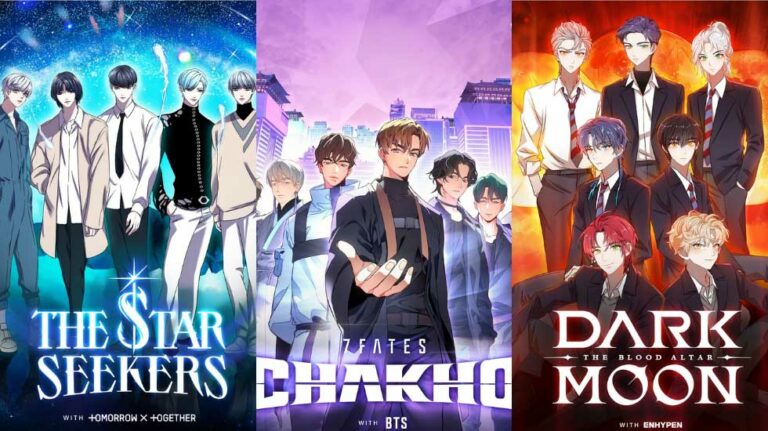 K-Pop boy groups, BTS, ENHYPEN and TXT venture into the world of comics, as HYBE unveiled webtoons featuring these groups over the weekend.

TOMORROW x TOGETHER will star in the original webtoon The Star Seekers. The story centers around the members of a K-Pop boy group, who live in a world where magic and reality coincide. One day, the group members awaken to their magical abilities and fight against a secret enemy.

The boys of ENHYPEN will star in the original webtoon Dark Moon: The Blood Altar. The webtoon is the first installment in the ‘Dark Moon’ series and centers around seven vampire boys who meet a girl with a mysterious secret.

Finally, BTS will star in the original webtoon 7 Fates: CHAKHO. The story is an urban fantasy genre inspired by the “Chakhogapsa”, or tiger hunters from the Joseon dynasty. Seven young men whose fates are intertwined work together as they encounter mythical creatures inspired by traditional Korean lore.

During the ‘2021 HYBE Briefing With Community‘ session aired on Nov 3, 2022, HYBE Labels unveiled plans to collaborate with Naver Webtoon for three unique, original stories in January 2022 for global audiences.

Kim Jun-k, the founder of the WEBTOON Entertainment Group, the global CEO, and the creator of the WEBTOON worldwide service said, “Through collaboration with HYBE, people all over the world will find the fun and value of webtoon and web novels. We hope that you will feel that. We will combine the globally competitive super IP and webtoon/web novels to showcase high-quality content with a high degree of perfection. “

This trial is a coalition of electronic comic platforms such as “LINE Manga (Japan)“, “NAVER WEBTOON (Korea)” and “WEBTOON (North and South America / Europe)” announced in September.

It is part of the “SUPER CASTING” project, which is being developed globally by Webtoon.

Another original webtoon story titled ‘Crimson Heart‘ will center around female lead characters. It’s believed that the new story will be tied to HYBE’s upcoming new girl group. The updates for this one, is still in progress, and would be based on how the first three releases do between the fans.