In DBS chapter 72 spoilers the stage is set for the most awaited battle to begin! The previous chapter was basically a build-up to the fight as Goku and Vegeta continue to sharpen their respective Godly techniques. After the brief time skip, I suppose the Saiyan Duo might have surpassed Granolah while the latter was doing nothing except sitting on his ass.

Meanwhile, Macki and Oil of the Heeters scheme to make the Saiyans and Granolah meet. They first paid a visit to Zuno and asked 10 questions including the weaknesses of Goku and Vegeta & about the Cerealian Dragon Balls.

Then they visited Chichi and asked her to summon Goku and Vegeta to beat up Granolah in exchange for Sky Gold. As Bulma and Chichi call for their husbands to come at once, Macki and Oil steal the Dragon Radar and wait for the heroes to arrive.

The two strongest warriors in the Universe teleport to Earth from Beerus’ world and got on the Heeters’ ship which would take them to Planet Cereal. The chapter ends with Macki informing Granolah of the Saiyans’ incoming.

Granolah is determined to get his revenge! How will this battle go about and who will emerge as the victor? Stay tuned to find out! (Spoiler translations are courtesy of Dragon Ball Hype and Herms.)

The Dragon Ball Official website released the drafts of the upcoming chapter on May 14th. The chapter will drop on May 20th. The title of the chapter is “The Saiyans and the Cerealian”
The preview of the chapter is “Goku and Granolah’s Destinies are finally going to cross!!”

The chapter begins with the Saiyan Duo and the Heeters arriving on Planet Cereal after 18 days.

Unlike Goku, Vegeta is pretty observant throughout the whole journey. He questioned Macki on the possession of such a luxurious ship if their resources are supposedly “scarce”. After arriving on the planet, he’s surprised that the area looks peaceful.

Macki points to the Saiyans in the direction where Granolah is located. Goku doesn’t sense any strong Ki in that direction but Vegeta reckons Granolah might be suppressing his Ki. The female Heeter says she and Oil will be waiting for them near the ship as things might become dangerous. With this, Goku and Vegeta fly off towards the said direction.

After they’re gone, Macki orders Oil to watch the fight. Oil agrees to this and asks her what she plans to do. Macki says Elec informed that he and Gas will be arriving on the planet soon. So she’ll be waiting for their arrival.

Meanwhile, Elec and Gas are in a ship that hovers above the planet. Elec says it’s been 40 years since he last visited this planet (He’s referring to the time when he rebuilt the planet, of which he played a part in its devastation, and sold it to the Sugarians).

Gas says he doesn’t have any good memories of this planet. The leader then tells him not to worry. He says Gas is different now, so things won’t go like last time. Gas agrees with Elec’s statement.

Coming back to our beloved Saiyans, they pass the planet’s old ruins. Goku wonders whether Granolah did this. Vegeta thinks it’s unlikely because the ruins look older than the city where the Sugarians live. That city seems to be undamaged.

As they approach a mountain, Goku senses an approaching Ki blast and quickly dodges it. The sudden outburst of Ki blasts coming towards them surprises them. Seems Granolah isn’t wasting time at all. Also, he’s putting his sniping abilities to good use. It seems he might be problematic to our heroes.

Goku notes that these blasts are becoming more and more accurate and aggressive. He finds it difficult to dodge them. He doesn’t know the opponent’s power level. I think that’s why he’s not taking the risk of blocking the Ki blasts with his hands. Vegeta tells Goku that they should find the source of the blasts. That will tell them the location of the shooter.

There’s another panel where we see Goku and Vegeta fighting together. Goku is using Ultra Instinct in his base form while Vegeta is in his Super Saiyan form. Shocking that they’re fighting together instead of having a round of rock-paper-scissors. They must really think Granolah is a big cookie to deal with.

There’s some additional (unofficial) descriptions released by Ryokutya Tweeted by DBSChronicles related to this DBS chapter 72 spoilers. It says and I quote:

“Who loses TWICE in ONE chapter? (lol)
He’s got the skills of Kenshiro (the protagonist of the Fist of the North Star).
XX is a well-informed person, I don’t want him to have the role of just a commentator.”

DBSChronicles thinks the “loser” is Granolah and “XX” is Elec.

We don’t know whether these descriptions are legit. But if they are, then maybe Goku and Vegeta are too strong for Granolah, overpowering him twice. Actually, this is good for the story as this paves way for some good progress in Granolah’s character development. This is something I ranted about in another post.

Granolah may have the Hakai and Ultra Instinct at his disposal but he hasn’t trained to hone his skills. His powers have gotten into his head and clearly, he’s making a similar mistake Moro did. Some say that “loser” is Vegeta but I doubt it.

“XX” could be either Elec or Monaito. Both are not warriors and can watch the fight from a distance. They could be commenting on how the battle ranges on.

We could see some flashbacks in this chapter as well. Granolah can recognize Goku as his face resembles Bardock’s and fight him aggressively. If he spews out his entire story, Vegeta’s guilty feeling could resurface once again and he may stop fighting with him. Meanwhile, the Heeters could start looking for the Dragon Balls.

What do you think of DBS chapter 72 spoilers so far? Are you excited for this doozy of a battle? Let us know in the comments below! 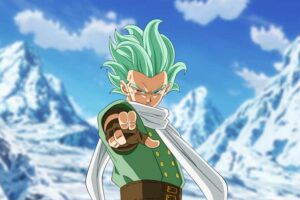