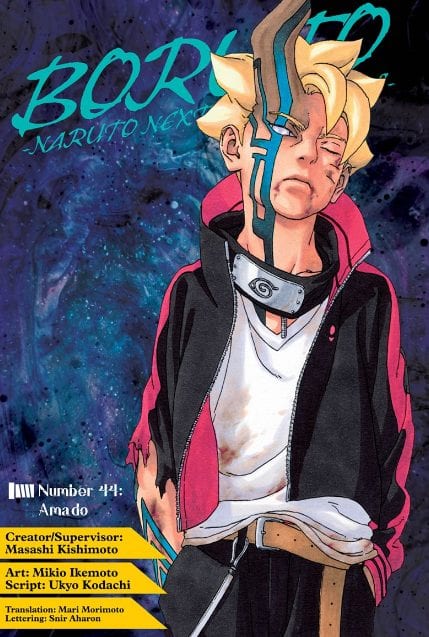 This review will contain spoilers for Boruto: Naruto Next Generations Chapter 44. If you haven’t read the chapter already, you can do it here for free on Viz!

There were certain sections of fans who were blaming creators Mikio Ikemoto and Ukyo Kodachi for taking things slow and putting too much time into fights that otherwise did not reveal much of a plot. However, Boruto Manga Chapter 44, titled “Amado” furthers the plot significantly and you’re sure to let out a gasp or two owing to the twists in the plot.

This chapter is of the same calibre of the previous one, where we saw Momoshiki Otsutsuki manifesting in Boruto and focuses on Kashin Kojin, Amado and their plans.

The chapter starts in an almost idyllic way as we see Naruto recovered and well in the hospital surrounded by Hinata, Boruto & Himawari. The same goes with Kawaki as he too does not have any long lasting damage from the fight. We also see Sarada discussing Boruto’s manifestation with Sasuke, who deduces that at some point in future, Momoshiki could use Boruto’s body to resurrect himself. Mitsuki too seems to have grasped as much and listens to Sasuke take wild guesses about what Jigen’s ultimate plan could be.

However, that is not the thing that we were interested in.

Boruto Chapter 43 ended with Kashin Koji deciding to apparently take on Jigen, who was weakened after his encounter with Sasuke and Naruto. His plans were supposedly privy to Amado, the only other person in Kara who supported him. We were expecting a showdown again this chapter but instead we got plot twists and drama of the highest quality.

Jiraiya Kashin Kojin summoned a steam toad for Amado and sent him to Konoha. However, before Kashin Kojin can reverse summon the toad,  a suspicious Delta runs into them, who threatens to report the duo’s activity to Jigen. Kashin Koji decides to fight her in order to prevent her from doing so, however we see Amado deactivating her quite easily.

It is highly possible that Amado has programmed similar stuff into the bodies of all Kara members giving him total control over them, maybe even Jigen too. We can’t help but wonder who exactly is in control of Kara and what the objectives of the mysterious organisation could be. Now that Delta has been taken care of Amado is sent to Konoha in the toad’s mouth by Kashin Koji. This was probably one of the last things that Kashin wanted to take care of before facing off with Jigen.

Amado now in the outskirts of Konoha encounters the new generation team Ino-Shika-Cho. He easily overpowers them and takes Shikadai hostage, strapping a bomb around his neck and demanding to meet Shikamaru. No doubts here right? Here’s a Kara member who has taken a genin hostage and is demanding to speak with the Hokage’s assistant. Obviously he is upto something sinister. Maybe he wants to steal Naruto’s chakra, or demand them to give back Kawaki.

That’s what we thought too. However we were totally blindsided to the events that followed.

After Ino connects Amado to Shikamaru, Naruto and Kawaki using her Jutsu, Amado drops a huge plot twist for everyone. He was initially surprised to learn that Naruto was alive and well in Konoha. He deduces that someone might have defeated Boro and then goes on to say that he has defected to Konoha.

The chapter ends with Amado agreeing to give intel to Konoha about Kara, Jigen and the Ohtsutsukis. The Konoha nin seemed to be utterly bewildered by his offer, but by the looks of it, Amado isn’t joking around. However, this sudden change of plans from a Kara member leads to more questions in our minds, and we’ll have to wait a month for these questions to be answered.

There is still a good chance that Amado is playing everyone, and if he isn’t we need to question his and Kashin Kojin’s motives. Why did they side with Kara? What is their ultimate goal? And what new information is going to be revealed about the Otsusuki in the next chaprer. Also, we can’t wait to see the showdown between Kashin Koji and Jigen. We were kind of hoping that it would take place in Chapter 44 but since we didn’t get it, lets hope that we get to see some part of it in Boruto Chapter 45.