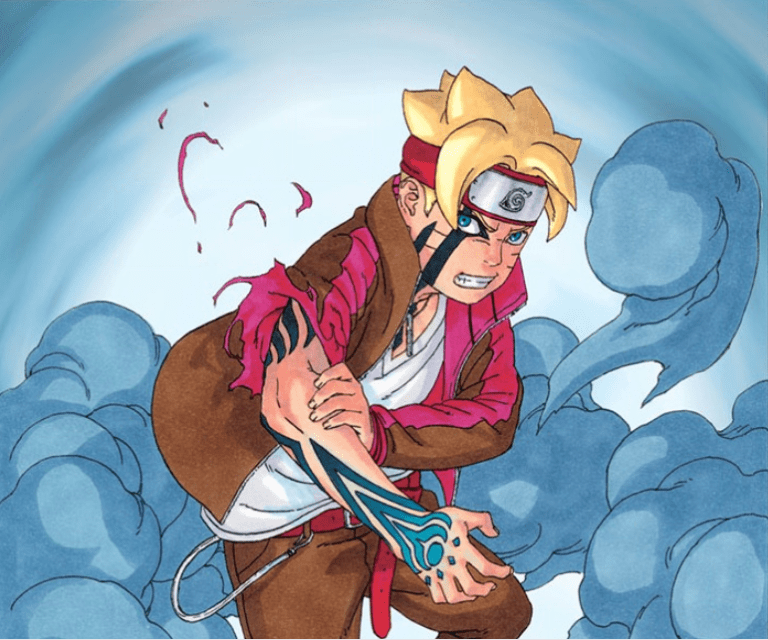 This review will contain spoilers for Boruto Chapter 42. If you haven’t read the chapter already, you can do it for free here on Viz!

The latest chapter of Boruto Manga is out. The previous chapter had left us on a cliffhanger and Boruto: Naruto Next Generations, Chapter 42 picks up where it left off and ends on a similar note, making us wish the anime had been following the manga instead of rolling out fillers again.

Chapter 42 of Boruto is named Regeneration and focuses on the regenerative abilities of the Kara member Boro.

The highlight of the latest chapter is certainly Sarada Uchiha using her deadly chidori against Boro as Team 7 and Kawaki continue to fend him off (unfortunately this was already revealed via a leaked panel and took some fun out of it).

That said, the Uchiha prodigy was once again the hero in the chapter as she was able to deliver a telling blow to the enemy with the help of Boruto, Mitsuki and Kawaki.

Boruto Manga Chapter 42 begins with high octane action continued from the previous chapter. Kawaki chased Boro as he went after a helpless, enclosed Naruto. However, as we suspected it was just a ploy to draw Kawaki out and break the teamwork of the young shinobis.

Seeing Kawaki selflessly taking a hit to protect Naruto makes us question what would make him change and become the villainous character, who possibly annihilated the whole of Konoha.

As the chapter progresses, we get some cool fight scenes as Boruto and Mitsuki team up, trying to take down Boro. As Mitsuki distracts Boro, Boruto is able to use a Rasengan which destroys Boro’s arm. However, their success is short-lived as the Kara veteran is able to regenerate his arm without any fuss.

This is where the trouble really begins for the Next Generation shinobi as Boro, though destroyed by the combined attacks of Team seven is able to regenerate his body. This ability combined with the scientific tools and other jutsus made him an opponent that Boruto and company found hard to defeat.

At one instance, Boro’s entire lower body is destroyed by a chakra blast from Kawaki, but he again regenerates himself much to the dismay of our heroes. However, they refuse to give up and get ready to make a final stand in front of their formidable foe.

As the Konoha shinobi reach their chakra limit, we get an interesting insight from Kawaki about the bodies of the Kara members which is scientifically modified by Amado. He tells Sarada that for Boro to be constantly regenerating his body, he needs to have a huge core that is powering it and that needs to be destroyed for them to stand a chance.

Kawaki mentions that his body too has been scientifically modified. However, Boruto: Naruto Next Generations, has not yet revealed the abilities that Kawaki might have gained because of this.

Kawaki tasks Sarada with finding out where the all-important core in Boro’s body would be.

As Sarada uses her 3 tomoe Sharingan, she figures out the location of the core and secret behind the strange hand signs that Boro had been weaving all this time. She is able to understand how Boro regenerates even though his whole body was destroyed at various points in the fight.

But then the fight was still far from over, as she had to strike Boro, before he could react and protect his core. That is when Sarada decides to spring a surprise and use the chidori.

As Boruto and the others continued to fight a losing battle buying Sarada time, she began sprinting and then out of nowhere, BAM comes the chidori.

The Chidori undoubtedly stole the thunder and was a brilliant way to end the chapter, making the wait even more interesting. If you think that Boro has been defeated, then there is a very high chance that you could be surprised come Chapter 43.

It is possible that the chidori only managed to destroy Boro’s core which allows him to regenerate, which would make him stop playing around and come out all guns firing in order to capture Kawaki and Boruto and kill off the others.

Boruto Chapter 42 is certainly not disappointing considering that it is a fight chapter. The sequences are interesting and nothing about it is predictable. It manages to keep you on the edge throughout. After all it is the battles that make the shonen genre appealing.

From the looks of it the fight between these guys will probably end in the next chapter. Sasuke, Shikamaru and the others have been absent in the past couple of chapters and it will be interesting to see what they have been upto till now. Maybe they’d make a surprise entry to save the young shinobis as even now there is no guarantee that they would be able to finish of the Kara veteran in the current state they are in.

But they deserve credit for having been able to figure out whatever they could about their opponent and come out on top, at least for the time being. The other questions till then will have to wait for the next chapter, which we are sure would be interesting as always.