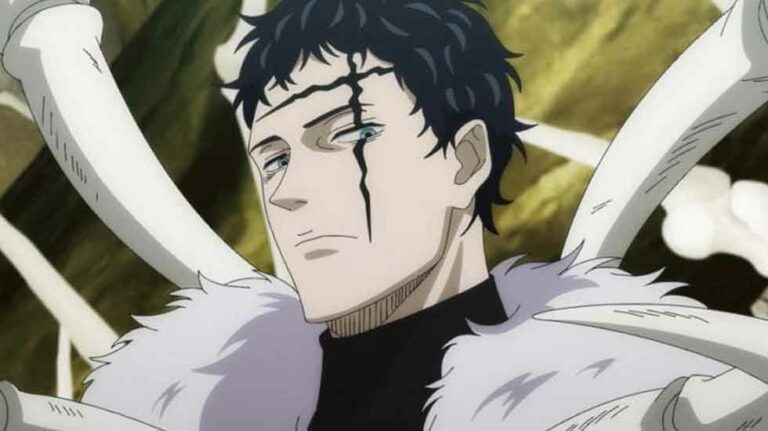 Black Clover Episode 161 brought destruction and devastation in equal parts for the Clover Kingdom’s strongest squad. This was the darkest episode yet for Black Clover, with half the Golden Dawn dead and the other half barely hanging on. With this episode, the Dark Triad has made its intentions clear. They are ruthless and will do anything if it benefits their objectives. Without further ado, here is what went down:

After the cliffhanger last week, it was expected that Yuno would go berserk seeing his squad members injured. However, it was not an easy fight. The Dark Disciple called Gaderois with Stone Magic could draw 40% of the power of the devil. It made his magic stronger, and Yuno had to use his Spirit Zephyr to cut through his magic.

This fight also gave us significant insight into the Dark Triad. When Yuno asked Gaderois about his emotions when they kill people, he was met with an answer that left both him and us shocked. There is no reason for them to do this other than fun.

The old king, Yuno’s father, was a peace-loving king. For this reason, the Dark Triad overthrew him. They gave all those who wanted to fight powers to be even stronger. None of them care about the people they kill until they get to go crazy with their abilities.

This viciousness hit Yuno in a different light because he had just realized that he is a Spade Kingdom prince. Yuno concludes that because people like Gaderois exist, there is always trouble in the world. It angers him, and he lands the killing blow to Gaderois.

Yuno, Klaus, and Letoile team up

Yuno rushes over to the other group of people fighting Fayol, another Dark Disciple with Mist Magic. The mist made it impossible for Klaus, Letoile, and the other squad members even to see, let alone attack, Fayol. Klaus’s attacks, no matter how strong, would definitely not impact mist. On the other hand, Fayol could (and did) use hardened attacks to attack the other members.

For a moment, it looked like Klaus was dead if not for Yuno. Yuno’s wind was Mist Magic’s natural enemy, blowing it away to reveal his position. Letoile took this chance to use her Another Atlas and gave an opening for Klaus to attack.

We see how committed Klaus and Letoile (and, by extension, all Golden Dawn members) are. Klaus is a respectable mage who trains hard every day even though he knows that natural talent is hard to beat. Fayol called himself a ‘genius’ selected by the Dark Triad, but this was his short-sightedness.

Even in a battered state, Klaus’ training could make him stand up and deal the final blow. Similarly, Letoile trained hard to wield the Elves’ magic remaining in her. Out of repentance or duty, she gave her best to make that strength her own and protect the Clover Kingdom.

The trio had just taken a breath of peace after fighting two powerful mages when their worst nightmare appeared in front of them. Zenon had won against William’s Tree Magic and held him captive using Bone Magic. Yuno immediately sensed the urgency and tension looking at Zenon. Even Bell (who is usually carefree) asked him to don the Spirit Dive because Zenon was terrible news. Thanks to that, he could block Zenon’s attacks. But before he had realized, Klaus and Letoile had fallen prey to the attack already. It left Yuno dumbfounded.

Yuno put all his strength into his attack but in the words of Zenon: it was not that Yuno was weak. It was just that Zenon was much stronger. Zenon broke Yuno’s Spirit Zephyr. He drew out only 55% of his devil’s powers, and Yuno was terrified, to say the least. There was no way he could beat Zenon in the state he was in. It was only a glimpse, but Yuno had indeed seen the power of the devil in Zenon, both figuratively and literally.

William’s magic: his last spell for the squad

Yuno had no chance. He was stabbed through by Zenon’s magic. By the time Ralph arrived at the scene, the tragedy had already struck. And the cause had abandoned the scene. Corpses and rubble lay where the huge Golden Dawn base once stood, and the captain was taken captive. The vice-captain was on the verge of death. And the squad rendered immovable. Ralph desperately searched for Yuno; he was the last hope for saving the Spade Kingdom from falling into ruins. Only to find a weeping Bell and nearly dead Yuno. He was shaken to the core.

Suddenly, the World Tree appeared from the rubble and slowly tended to all the Golden Dawn members. It healed all those who were not dead. William had left the last bit of magic he could despite losing against Zenon to protect what was left of his squad. When the squad members came to, they realized the weight of the loss. In the blink of an eye, their cherished nakamas had perished right in front of them.

This was the Clover Kingdom’s strongest squad: defeated, injured, suffered, perished, helpless. And the boy who had become the Vice-Captain in 18 months could only stand and stare. This is certainly not the last blood that will be shed in this arc.

The ending song after this massacre hit home. The use of the OSTs in this episode was fantastic and pulled the whole devastation together. Voice acting was top-notch, especially in portraying Yuno’s character development. The art was good, but the animation was choppy at places, which sort of took the viewer’s attention off the mood. However, Episode 161 was an amazing adaptation of the manga chapter that really kicks the Dark Triad’s roles into the story. Did you like the episode? Rate it and comment down your thoughts!