Marry Grave was canceled in Japan due to a lack of popularity. 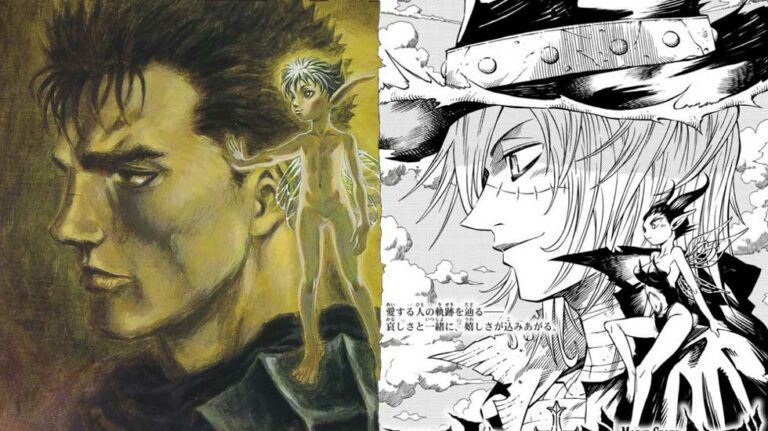 The frontispiece features Wiseman Sawyer, the protagonist of the manga, with Jean, the fairy who accompanies him in his quest to revive his wife. The art was inspired by the cover art of Berserk volume 17, which features Guts and Puck (check image above).

Miura’s Berserk is a mammoth in the dark fantasy manga genre known for its extravagant spreads, bleak setting and well written characters. Its popularity has inspired many a manga artist to try and recreate its art in some form or other.

As of May 2021, the Berserk manga had over 50 million copies in circulation, including digital versions, making it one of the best-selling manga series of all time. It received the Award for Excellence at the 6th installment of the Tezuka Osamu Cultural Prize in 2002.

Marry Grave follows the story of an undying adventurer Wiseman Sawyer, who is trying to collect all recipes required to revive his beloved Rosalie. Along the way he retraces the path his loved one traveled.

The manga was serialized in Shogakukan‘s Weekly Shōnen Sunday from December 2017 to January 2019, with its chapters collected in five tankōbon volumes.

The series was, however, canceled in Japan due to a lack of popularity.

Yamaji had earlier announced via Twitter that he had received an offer from two foreign publishers to continue drawing Marry Grave. He does not reveal which publishers are specifically involved.

Last October, he announced his new series Soara to Mamono no Ie will start serialization in the upcoming January issue of Shogakukan‘s Shounen Sunday S magazine. The issue was released in Japan on Nov 25, 2021.