Attack On Titan: Who Was Controlling The Titans In Chapter 135? 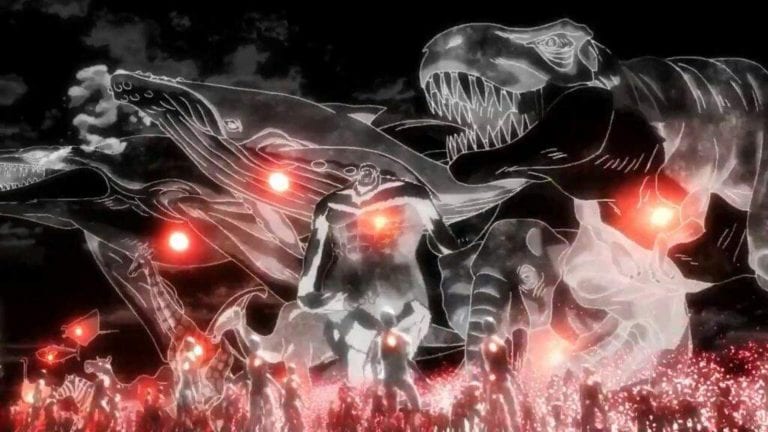 After a long struggle and some sacrifices, the alliance finally caught up to Eren. While great damage had already been done, they still hoped to stop Eren from continuing with his doomsday plan. Taking down Zeke was the agreed upon solution. And seeing the Beast Titan dangling in front of them, the alliance saw it as a perfect opportunity to end it all.

And so they took the bait!

The Beast Titan turned out to be an empty shell, thus raising doubts about Zeke being dead. To make matters worse, a bunch of Titans spawned out of nowhere and began attacking them with an intent to kill. If not for a certain flying Titan, the alliance would have been done for. Had Eren become so callous that he no longer cared about his friends? But wait! Was Eren even controlling these new Titans? Or was it Ymir?

Was Ymir controlling the Titans in chapter 135?

From what we saw in the manga, it seems that Ymir, not Eren, is the one controlling these Titans. Armin too is of the same opinion. The main reason for this is because Ymir’s astral body is seen as soon as these titans start spawning. Something similar happened in chapter 131 too when Ramzi caught a brief glimpse of Ymir before he was crushed by a Colosssal Titan.

If Eren indeed was hellbent on moving forward like he said, then the resistance had to come from Ymir. However, there is also a tinfoily possibility that comes to our mind.

Whenever Eren acquired a new power in Attack on Titan, he had to spend a considerable amount of time perfecting it. Be it controlling his titan properly or even hardening, Eren had to grind a lot to master these things. Going by that analogy (even though it is tinfoil) we could assume that he can’t control the Founder’s powers with such ease. This leaves us with Ymir, who is the best choice for doing this!

Even the fandom seems to be backing the idea of Ymir being in control and not Eren. This is because the titans that had spawned were trying to kill Connie, Levi and Jean. Fans are finding it hard to believe that Eren had become cold enough to kill the very people he wanted to protect. It is true that killing the people within the walls, especially his friends won’t align with his goals.

However, Eren’s goals have become somewhat vague at this point and it is hard to speculate what he has planned, or rather what future is he trying to achieve. Is this based on something he saw? That aside, the question that begs to be answered right now is something else.

Is Eren still in control of the rumbling?

If Ymir indeed is the person who was responsible for spawning the titans in Attack on Titan chapter 135, does it mean that she is one in control of the rumbling? Judging from the events, Eren being trapped in the paths realm seems like a plausible scenario.

He is either partially or completely unaware of what is happening. Eren’s astral form reverting to that of a kid and basking in the glory of “freedom” that he had achieved might point to the possibility that he is disconnected from reality. Even his thought process looks more like a man who is lost and is no longer sure of what he is doing.

Back in Trost district when Eren was unconscious after transforming into a Titan, he lost control and began attacking Mikasa.

Something similar could be happening here. Was the power of the Founding Titan too much for him to control? If that is the case then it’s possible that the Titans or even Ymir are following the deepest desires in his mind.

Eren’s younger self could be an allude to this. Children signify unadulterated temptations, desires and curiosity. Is this desire what the titans or even Ymir are following? Or is this a part of what the Attack TItan is?

Ymir is free to choose:

In chapter 122, Eren gave Ymir the freedom to choose. In a way, he set her free from being a slave and encouraged her to make her own decision. She willingly lent Eren her powers and allowed him to activate the Colossal Titans in the walls. This means she chose to go ahead with Eren’s plans.

So it should not come as a surprise that she is trying to protect Eren. In fact, Ymir is doing it on her own volition. Even if Eren is unaware of what is happening, Ymir is just doing the job of keeping him safe. She is continuing with the rumbling that he started and is protecting his life. She is not the final boss that fandom makes her out to be. For now atleast, she doesn’t seem to have any ulterior motives.

Does she hate all of humanity? Maybe she does. Is she free to go ahead and kill them all? Yes she is. Is that what Ymir is doing right now? We don’t know.

Motives and goals, like we mentioned before, have become very vague in the series for now. However, we do hope to get some clarity about these titans and the true powers of the Founding Titan. Is there any limit to what Ymir can do? Is she a literal God in the Attack on Titan universe?

Well, as the series hurtles towards an epic end, the questions in the mind of readers only seems to be increasing. What are your thoughts about the Titans and Ymir in chapter 135. Let us know in the comments section!