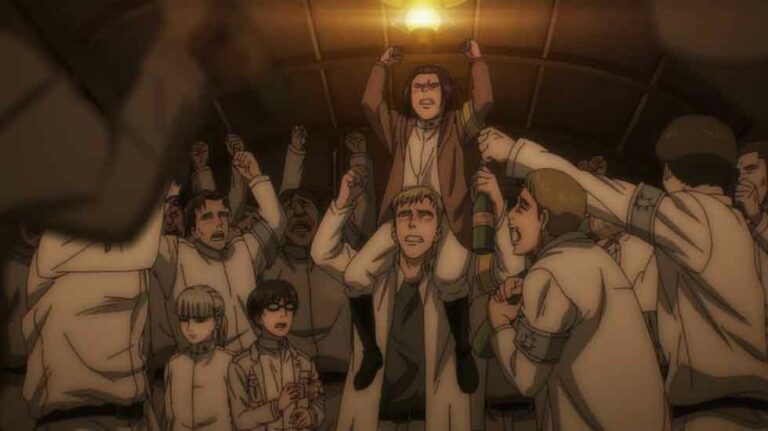 Attack on Titan: The Final Season returned this Sunday with episode 2, “The Midnight Train”. Though set away from the battleground, the episode excites viewers as we gain more insight into Marley and the new characters.

There is definitely a big shift from the first episode as it takes place after the war. Not only most does it give us a clear idea of what Marley is thinking next but also shows the complexity of relationships of the Warriors and the candidates.

The Meeting and a “secret” conversation

Episode 2 of Season 4 opens with the military readers discussing the almost inevitable downfall of titan powers. This is when Zeke, called the “Wonder Boy”, makes a suggestion. He pitches the idea of continuing the operation to get back the Founding Titan. Zeke Jeager argues that the problems created by his father have to be solved at once.

We see Colt being amazed by the influence Zeke holds as an Eldian. As the inheritor of the Beast Titan, Colt wonders what makes Zeke’s Beast Titan so different. Zeke has successfully hid his royal descent.

Zeke tells Colt that he could only find out about his “secret” after inheriting his titan. But, Commander Magath interferes the conversation which Zeke rightfully diverted to talking about wiping ass. Talk about being street smart!

Zeke ends the scene by saying, “it’s more than their titans that pose a threat”; and we see flashbacks of both Mikasa and Levi Ackerman. With the memories, it’s obvious that the focus of the episode now shifts to our ever so traumatised Reiner.

Porco confronts Reiner, Pieck comes to save the day!

Reiner wakes up from what looks like an exhausting dream, only to realize he is not the only one in the room. Porco Galliard, the current Jaw Titan, finally makes his debut without his titan. Porco brushes off any gratitude shown by Reiner. He taunts him by saying that if he were the Armoured Titan, this would not happen. Not only that, but Porco also blames the death of his brother on the fact that Reiner is an incapable warrior.

Sadly for us, we realize that it’s inevitable that Porco only became a Jaw Titan by eating Ymir. While it might be the end of Ymir’s complex character, her memories provide some closure to Porco about the death of his elder brother.

Porco, however, is not done with Reiner and goes as far as to accuse him of copying Marcel, seeing it through Ymir’s memories. Pieck’s entrance, however, saves Reiner from Porco’s tirade.

The lovely lady controlling the cart titan, Pieck, enters the room. It’s been two months since she became human again! Viewers firsthand see the exploitation the warriors face. Porco and Pieck engage in a conversation, both hoping they don’t have to fight for a while. The episode further expresses how tired even the warriors are of fighting.

Taking Pieck’s advice, Reiner goes to meet the young warrior candidates who were lamenting the possibility of them being rendered useless. After a heartwarming reunion, Reiner manages to tug on our heartstrings, as he sees his old comrades in Gabi, Falco, Zophia, and Udo. The scene transitions to a man watching them from afar. Do you wonder who that is?

Finally, on the train back home to Liberio, the Eldian unit celebrates Gabi. On the other hand, Falco broods over the possibility of early death for Gabi, who is the potential inheritor of the armoured titan. Reiner confronts Falco for looking down on the honour but soon realises that both share the same aim: saving Gabi. While the “dark future” can be interpreted in many ways, it surely helps us know that unprecedented events are coming.

Being the kind-hearted boy he is, Falco asks about the soldiers Mr Koslow was with. Falco helps them up, telling a certain soldier who wore the armband on the wrong arm that he would have to not fight anymore.

The Warrior Meeting and the way ahead

Zeke invites the warriors to a meeting discussing the plans for taking over Paradis Island. Here, we get a small introduction to a new titan- the War Hammer Titan, who has been passed down in the Tybur Family. Zeke tells them that Willy Tybur will make a speech during the festival in Liberio in front of many dignitaries: that under a year, Marley will have full control of Paradis.

While Porco raises a sound argument questioning why the Tyburs are stepping in to become heroes, Reiner is ready to do whatever to finally fulfil the plan. Though, he looks anxious at the thought of returning to the island where he spent his teenage years.

While the episode is filled to the brim with extremely crucial information, it fails to match up to the previous episode’s mastery. Script wise, an extremely important secret about the Ackermans was removed. Moreover, Reiner didn’t seem as enraged by what Falco said in the train as he appears to be in the manga. However, the episode manages to show us that the “enemies” on the other end of the ocean are humans, too. Lastly, the release of Eren’s character design before airing gave away a big surprise. However, if you haven’t realised it yet, I won’t tell you anything!

A tip: don’t consider any episode as filler!