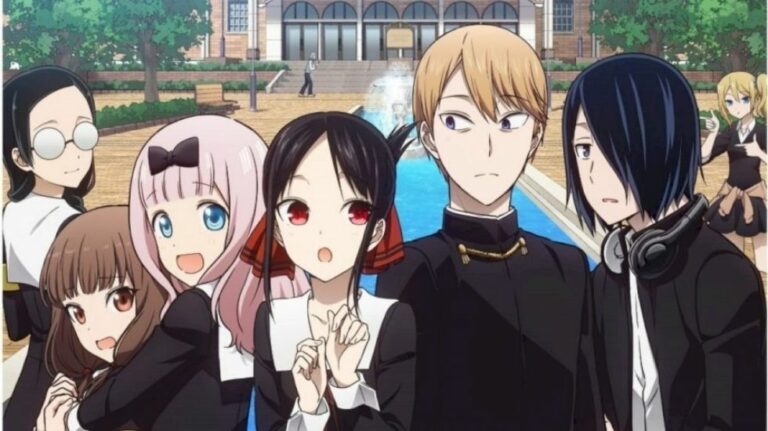 Want more doses of KAGUYA-SAMA: LOVE IS WAR? You’re getting more next year… and right now!

Here’s everything you need to know about Kaguya Sama Love Is War Season 3!

In the senior high school division of Shuchiin Academy, the student council president and vice president, Miyuki Shirogane and Kaguya Shinomiya, appear to be a perfect match.

Kaguya is the daughter of a wealthy conglomerate family, and Miyuki is the top student at the school and well-known across the prefecture. Although they like each other, they are too proud to confess their love, coming up with many schemes to make the other confess.

The official website for the Kaguya-sama: Love is War television anime posted a 10-minute “teaser promotional video” on Oct. 21.

The entire ten-minute episode is an adaptation of chapter 110 of the manga, “Yu Ishigami Wants to Chat.”

The complex 4D-chess romcom announced its return on its official Twitter with a heart-filled key visual:

The returning staff members include:

About Kaguya Sama: Love Is War

Kaguya-sama: Love Is War is a Japanese romantic comedy manga series by Aka Akasaka. It began serialization in Shueisha’s seinen manga magazine Miracle Jump in May 2015 and was transferred to Weekly Young Jump in March 2016.

A 12-episode anime television series adaptation by A-1 Pictures aired in Japan from January to March 2019. A second season aired from April to June 2020.

An OVA episode was released in 2021. It was also adapted into a live-action film directed by Hayato Kawai, which was released in Japan in September 2019. The film ranked at #1 in its opening weekend.

As of April 2021, the manga had over 15 million copies in circulation. In 2020, Kaguya-sama: Love Is War won the 65th Shogakukan Manga Award in the general category.

The manga has entered the final arc.