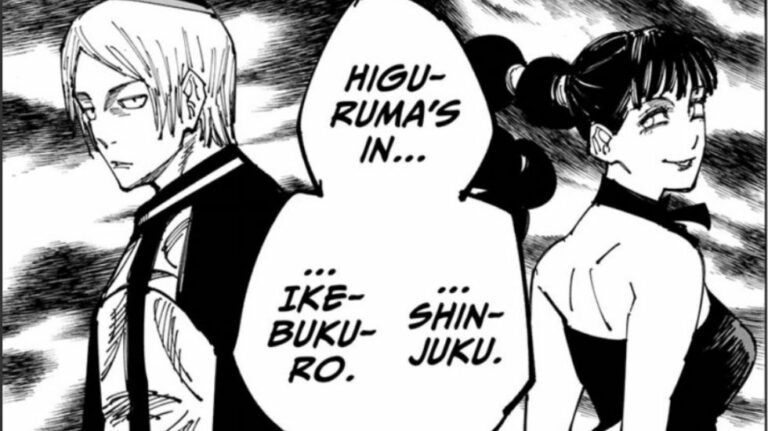 After another break from the amazing chapters from Akutami, Jujutsu Kaisen returns with its chapter 162 this week. The beginning of the Culling Games seems awfully slow, as chapter 161 had also illustrated.

Following the same footsteps, JJK chapter 162 was also an introductory and buildup chapter. Not a lot happened, but what happened is worthy enough for a discussion and overview. So, here we go!

What’s that? A plane? A bird? Chotto matte, why is this wannabe helicopter flying at me?

As soon as Itadori entered the Culling Game barrier, we realized with him that this was not going to be easy at all. It was a friendly greeting from Hanyu and Haba for our pink-haired protagonist.

Well, it was perhaps the other way round; Itadori announced his arrival in a grand fashion.

Haba was next to tussle with Itadori now that Hanyu was out of the sky picture. It wasn’t long before Haba became the latest addition to the Itadori’s insane physical strength and prowess fan club.

I mean, Itadori basically threw a full-grown man through several stories in a single throw. Whew. However, he quickly realized that restricting Haba to a closed space would work the best. Haba’s only means of attack (and defense) was the propeller.

So, contrary to Itadori’s initial thoughts, Haba could not use the distance factor to his advantage. I feel proud of Itadori when he made this deduction because he has also begun thinking on his toes during fights like Megumi!

By the way, just what kind of Doraemon does Haba even have to fix the copter on his damn head?

Anyway, Haba’s propeller is pretty strong for all it seems; he could blast through walls quite easily. But this show of power was futile.

Itadori had already decided his plan of action, judging his fight with Hanyu earlier. It seems that both Hanyu and Haba had a sort of binding vow that concentrates or manifests their technique at one end of the body.

Since it is a binding vow, it means that even if a part becomes sturdy, the rest of the body becomes weaker in exchange. Hence, Itadori could defeat Hanyu with a simple fight. Another thing is that the head is always a weakness of the body.

Haba’s cursed technique was concentrated on his head, but even then, how strong could one of the weakest parts of the body become? Itadori took a gamble: he could crack Haba open like an egg if he landed a hit or become a smoothie.

We all knew what was going to happen, and it did. Itadori won without any discomfort and asked Haba about Higuruma’s whereabouts. A point to note here is that Itadori did not kill Hanyu or Haba because he does not want to kill anyone. Hence, he did not get any points either.

As usual, the fight between both of them was the perfect amount of fast and detailed. Without wasting a lot of time on a side character, Akutami told us about a new concept as well. It is always good to see a few short action sequences in slow chapters.

Here comes the most exciting part of JJK chapter 162, though. In the last chapter, we had seen Megumi not-that-willingly partner up with an oddball, Remi. In this chapter, she revealed that she is a modern shaman, not an ancient one.

Modern shamans like Remi have been fighting in the Culling Game for 12 days already, ever since the colonies came into existence. They did not have a choice, either, because only non-shamans had a chance to leave the barriers.

This conversation proved Megumi’s speculation that modern shamans won’t be up for fighting wrong. These shamans HAD to fight regardless, and some of them even grew in power.

Kenjaku must be quite happy witnessing this if he is free of some mommy duties, that is.

Remi also kindly pointed out that Megumi should stop thinking about modern and ancient shamans differently. So, Itadori and Megumi had to look out for allies and enemies both ways.

But Itadori does not know so yet, and he met someone as well. This person is Amai Rin, who claims to know Itadori from his school days. It was just as I had speculated in the earlier chapter! Amai knows Itadori as the Tiger of West Junior High.

Itadori’s expression at being reminded of that cringe name is priceless LMAO, total Gen-Z energy right there.

The most important point here is that Amai also apparently knows where Higuruma is: Ikeburo. And being the pitiful lackey he is, he would serve as a guide to Itadori. HOWEVER. Remi is also leading Megumi to Higuruma who is allegedly in Shinjuku.

SOOOOOOOOO which one is it? Clearly, one of our boys is being led into a trap! There is a shady man waiting for someone at the other end, with what looks like receipts hung all around him. This man also has “Indomitable” tattooed on his arm. PS: abs for all.

Both Amai and Remi look suspicious, so there is no telling which one of them is lying, but which one is it?

Also, can we talk about how Remi’s hair is a scorpion? This dynamic between Megumi and Remi is surely a major hint to the fable of the Scorpion and the Frog. Is her hair a hint that she is going to betray Megumi?

On the other hand, Itadori also believed Amai a bit too easily. In the Culling Game, it is each one for themselves. It wouldn’t be a shocker if Amai’s goal was to lure even Hanyu and Haba into a trap, let alone Itadori.

Just when you decide on one thing, you remember that Akutami is the one writing this story. For all we know, both of them might be lying! Maybe Amai is leading Itadori to the man whilst Remi has her own separate trap or plans.

Then again, Jujutsu Kaisen is not that easy to guess. Remi’s persona has been screaming suspicious the moment she arrived in the story. This very fact might be the story tricking us into believing Remi is the deceitful one.

And you can’t deny that Amai knowing Itadori from earlier did not give him a false sense of security. He might be the snake here. So confusing, right?! Akutami is playing mind games not just with the protagonists, but also with us at this point!

Who do you think is the liar? And do you think Higuruma would find both of them first? Let us know in the comments section how you found JJK chapter 162!