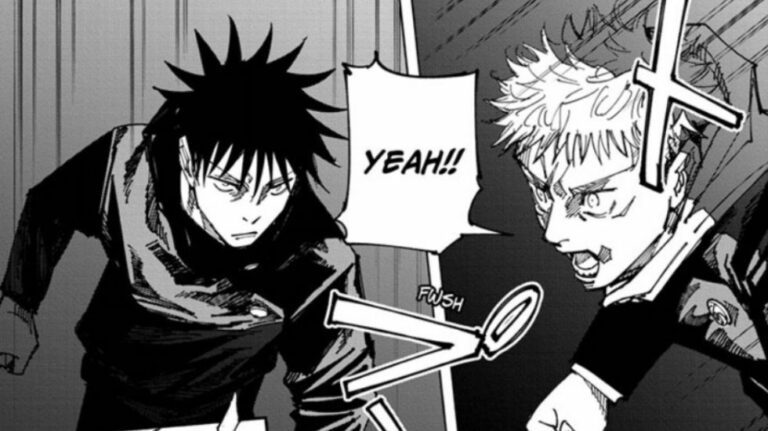 Time is flowing slowly again, by Jujutsu Kaisen standards, that is. JJK chapter 161 was a breather for both us and Akutami himself. However, it was also an important chapter after the last one.

We get introduced to some new characters that I believe are the first of the many we will see. Unfortunately, Jujutsu Kaisen will be going on a break next week, though. I would say Akutami deserves the break after such incredible chapters recently.

With that, let’s begin!

Contents hide
Jetpacks and disguises
A maiden with a knight
Of old, of young

We immediately start off with a new character, a lady in a jetpack called Hanyu. Actually, her hair is a jetpack? She has a jetpack for hair? I don’t know, something like that.

Well, the Game has begun in a very HUNTER X HUNTER-ish style. There are players already in the barriers waiting at the points of arrival of new players.

It is the best chance to take advantage of their disorientation from getting swept away and increase one’s points.

It also seems that this Jetpack Lady (yes, we are going to call her that) is the definition of a bully. Not only does she have her partner with her, but she also has patronized a young lad to assist her.

And all this to pry on whoever joins the Game without caution. She reminds me a lot of Mi-Nyeo from Squid Game, for real. But let’s talk about the boy, Amai, with Jetpack Lady for a minute.

Amai is most probably sticking with the duo to save his skin, but I am not sure how feasible such alliances are. Culling Game is a survival game in the true form, except that the entire game is killing each other. And we already know how people change colors in such dire situations.

For some reason, though, a lot of fans are speculating if Amai is actually Nitta Arata in disguise. He does look a bit similar to Arata, and even recognized Itadori at one go.

If you are lost who Arata is, let me remind you. Arata is the younger brother of Nitta Akari, the auxiliary manager who was the driver in the Death Painting arc. In the Shibuya Incident, Arata healed (or tried to) Nobara after her fatal fight with Mahito.

Now, it is actually possible that the boy in the barrier is Arata. He is in the Kyoto School, but he was only a support shaman. His healing abilities are limited to stopping bleeding and such.

But what if the Kyoto branch also sent the students to the colonies to help out?

Question is, why would he need a disguise for that? And why is he collaborating with these shamans? But if he is Arata, then, we might meet the other Kyoto students again as well! I would love to see their reactions to Maki obliterating the Zen’in clan.

On the other hand, other people are also speculating Amai is some friend from Itadori’s school days. Sometimes we kind of forget that Itadori had a life before jujutsu, too; he was good at sports and was popular too. He even had a super cool nickname, Tiger of West Junior High.

So, what if he is just an acquaintance? Ever since Sasaki showed up, there is no way of telling when or if any other acquaintances of the characters might show up.

Plus, if it really is someone from Itadori’s school, my suspicions about Ozawa coming into the picture are only getting stronger.

Anyway, little did the Hanyu and Haba know they picked the wrong person to mess with. Itadori has superhuman strength and he has just fought a bunch of strong beings. It was obvious that with his reflexes, he would not fall into trouble that easily.

But he did lose Megumi, inevitably because of the barrier rules. Let’s see what was going on the other side.

A maiden with a knight

Itadori and Megumi got swept to two out of the nine different starting points in every colony. Megumi tried searching for Itadori using Nue but to no avail. While Itadori was dealing with Jetpack Lady, Megumi had an interesting catch as well.

Sukuna is aggressively complaining as I type this because it seems that one more person has taken a liking to Megumi at first glance. What can we say, Megumi is just that gorgeous, is he not? xD

We met Remi, a strange woman. Yep, definitely “strange” is the word to describe her. Remi and Megumi’s exchange was funny though, and it piqued my interest in Remi.

As was the plan, Megumi tried to get information on Higuruma to get help from him. For that, Remi asked a weird thing in exchange. She asked Megumi to be her knight. ??? Get in line, miss!

In his desperation to seek Higuruma, Megumi did say yes, but I am a bit worried. What if making someone accept knighthood is the prerequisite for a cursed technique? That would mean Megumi just got himself into a mess.

But again, Megumi has been very calculative and smart these past few chapters. He figured out Kirara’s cursed technique on his own in chapter 156 so I hope he took the correct step.

Nevertheless, Remi apparently has some information about Higuruma. I am wondering why Megumi hasn’t used the new rule #9 of locating any person yet to find him. He must have some rational thought behind it, I (once again) hope.

Of old, of young

At the start of JJK chapter 161, we saw Megumi and Itadori discuss their plan once again.

All the ancient shamans that Kenjaku made vows with don’t need a reason to fight. It is like the addiction of being on a battlefield that we have seen in a lot of shounen stories.

If I had to compare, I would bring in how sports players want to be on the court until their last breath.

In the same way, old shamans don’t mind dying in battle. However, according to Megumi, there must be some modern shamans like them in the barriers. These modern shamans would probably see how pointless the Culling Game is.

They also don’t have any vow with Kenjaku holding them back; saving people might have motivated them into entering the Culling Game.

Such modern shamans could be the best assets, as they would be more willing to cooperate than old shamans. I think shamans like Remi and Amai are surely present there. And even shamans who aren’t strong enough to protect themselves.

I also believe that Jetpack Lady and Haba, Remi, Amai, and even Higuruma are modern shamans. But successful cooperation depends on the nature and mood of the shamans. So, I guess it is recruitment time, now?

The last panel of Megumi was so GOOD, I actually jumped in surprise. Megumi is very serious about the affair, especially since Tsumiki’s life is on the line. Moreover, it once again emphasized how Itadori and Megumi have been different from day one.

Itadori and Megumi’s alignments are very distinct; one on the selfless side, the other on the selfish side.

Itadori is reluctant to kill people unless absolutely necessary, but Megumi doesn’t mind killing to earn 100 points if it comes to it. It reminds us how Megumi’s reason for becoming a shaman is to protect what he wants to protect.

That is how we end our JJK chapter 161. I wonder if Akutami will show us insights into different colonies. It would be weird if the entire arc is based in a couple of colonies.

I can’t wait to see what Okkotsu is up to as well, please Akutami, give him some screen time! T_T What are your thoughts on this chapter? Let us know in the comments!