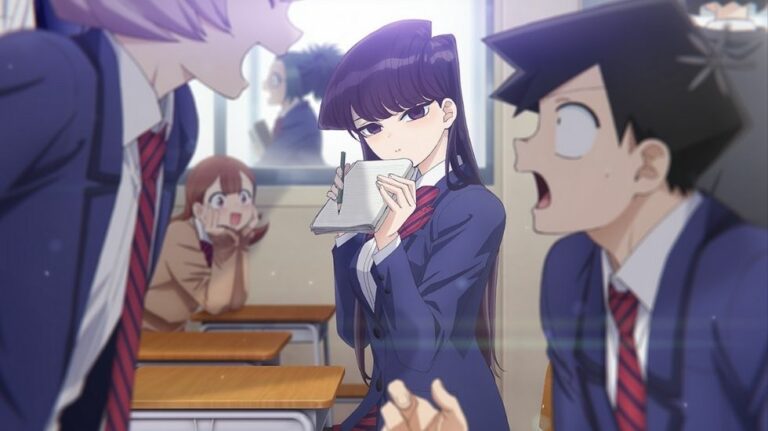 Timid Tadano is a total wallflower, and that’s just the way he likes it. But all that changes when he finds himself alone in a classroom on the first day of high school with the legendary Komi. He quickly realizes she isn’t aloof—she’s just super awkward. Now he’s made it his mission to help her on her quest to make 100 friends!

Previously, the official website released a trailer for the upcoming romantic comedy anime series Komi Can’t Communicate along with the announcement of the adaptation.

The 1min video gives a first look into characters who will play an important role in the series.

The new key visual has already surfaced online a week before the official release, on August 18.

The manga is also inspiring a live-action series that will premiere on September 6 at 10:45 p.m. JST on NHK General’s “Yorudora” late-night drama block.

In addition, this year’s 42nd issue of Shogakukan’s Weekly Shonen Sunday magazine also announced that Netflix will stream the anime in over 190 countries and territories in eight languages dubbed and 31 languages subtitled.

The announcement noted that Netflix will debut the anime outside of Japan on October 21, two weeks after its Japanese premiere, with weekly new episodes.

The protagonist Shōko Komi will be played by the voice actor Aoi Koga. Gakuto Kajiwara will play Komi’s first friend and love interest Hitohito Tadano. Rie Murakawa will join Koga and Kajiwara as Najimi Osana, the flighty childhood friend of nearly everyone at Komi’s school.

The additional cast of Komi’s classmates include:

Komi Can’t Communicate will be directed by Kazuki Kawagoe (Beyblade Burst franchise storyboarder and episode director), with Ayumu Watanabe (After the Rain, Children of the Sea, Major 2nd) serving as the chief director. Deko Akao (Noragami, Snow White with the Red Hair, Carole, and Tuesday) is in charge of the series composition, and Atsuko Nakajima (Hakuoki: Demon of the Fleeting Blossom, Ranma 1/2, Tokyo Ghoul: re) will work on character designs. OLM, the studio behind anime like Pokemon, Berserk, Inazuma Eleven, will produce the series.