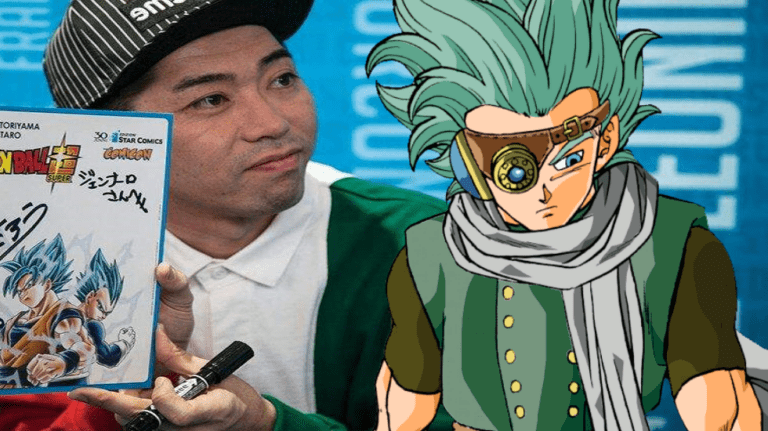 There are many new characters in Dragon Ball Super’s latest arc like the Heeters, Granolah, Oatmeel, the Sugarians and Monaito. When asked about his favorite designed character, Toyotarō reveals that he has a special place for Granolah in his heart. As the main character and central figure in this arc, the Mangaka expresses his satisfaction with the Cerealian and his progression in the story.

While Twitter is abuzz with the interview’s power-scaling elements, let’s draw our attention to Granolah’s character design and the effort that went into creating him.

Toriyama-sensei composed the plot based on a scenario he refined overtime, and i think it resulted in a truly fantastic story. There are some facts and background information that only the original creator (Toriyama) knows, so i think you’ll be thrilled! And obviously another highlight will be the sort of exhilirating battles you expect from Dragon Ball!

This time, he went deeper into the inner workings of the arc.

Before finalizing on the Cerealian, Toyotarō had proposed or thought about various other characters. He wasn’t sure whether to use existing characters or create new ones, or whether the character should hail from Universe 7 or any other. So after a couple of brainstorming sessions, he concluded that a character connected to the Saiyans would be perfect. And that’s how Granolah came to be.

After receiving the green signal from Uchida, the two then created a general story idea centered on the character before submitting it for review to the original author, Akira Toriyama.

Toriyama took their ideas and proceeded to create a full-fledged story, while creating new characters in the process.

Toyotarō revealed in this interview that Granolah the character was his idea. He also came up with the designs. While drawing him, Toyotarō was focusing on the fact that Granolah is a survivor of his race. In the Jan 2021 interview, he mentioned a similar thing:

Q: What sort of image did you have in mind when designing the new character Granola?

A: He’s the last survivor of the Cerealites, so I pictured him as a lone bounty hunter. While he’s humanoid, I emphasized that he does have some physical differences separating him from an Earthling. His clothes are the traditional dress of his race, so I also tried to give him a retro vibe.

Toyotarō mentions that, although the Cerealians are NOT a warrior race, they do like to fight extensively. Considering his mentor’s remarks, the DBS Manga author had the goal of making him into a sniper, belonging to a race of sharpshooters with an evolved right eye. To aid his sniping abilities, Granolah had these goggles for locking on to targets (which tells him the target’s blow flow and muscle movements).

Regarding his clothes, Toyotarō thought about giving an old-fashioned touch, given that the Cerealians went extinct 50 years ago. He also wanted to add some steampunk elements. With these in mind, he designed the character’s clothing.

Uchida adds further that it’s a mix of old-fashioned and futuristic (going by the idea that they are technologically advanced or ahead of their time). His clothes are made of leather and cotton-like material, giving off those retro vibes.

While touching upon the character of Oatmeel, Uchida says he was really surprised that the Granolah’s goggles not only was useful in sniping but it could also talk.

Toyotarō reveals the reason behind Oatmeel’s creation. He recalled Toriyama saying that “If there aren’t 2 characters moving together, we never know what they’re thinking” That is why the famous Mangaka created characters in pairs. Toyotarō mentions Beerus and Whis & Shin and Kibito as some examples.

This paring helps in characters unveiling their mind to the other. They have someone to talk to rather than talking to themselves so, this tactic is pretty useful in narrating the story to the audience.

But Toyotarō doesn’t stop here. He captured the interest of the viewers by saying that Oatmeel will play an integral part in the story. He’s not just used as a plot device to explain the story to the readers. So the identity of Oatmeel will be revealed in the future!

The ideas Toyotarō proposes for the Manga are first considered by Uchida before being presented to Akira Toriyama. And as stated by Toyotarō himself in this interview, he cannot make any drastic changes in the lore, given his position at Shueisha.