Anomalies are common in the world of Demon Slayer, but none as peculiar as the case of the black nichirin blade. Read ahead to know what it truly signifies! 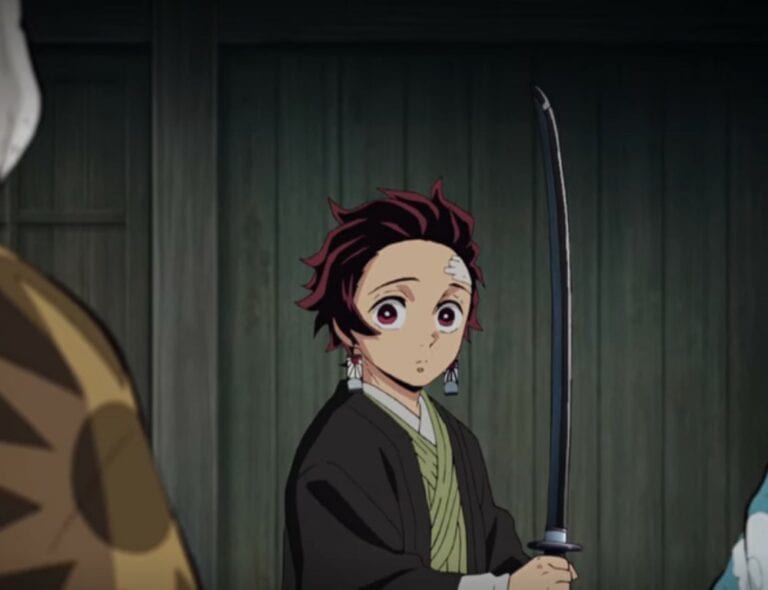 Unsheathing your sword to finally know its colour must be an exciting time for a new demon slayer! But, what if it turns out to be a black nichirin blade?

Well, that’s exactly what happened with Kamado Tanjiro. As the colour slowly swirled upwards from the hilt to the tip, it becomes more obvious that this is no sign of good fortune.

When one looks at the bright blades of other characters (you can read about them here), it makes the black nichirin blade more mysterious.

There is not enough information about the black blade, but that hasn’t stopped it from becoming one of the most popular topics for fans to talk about!

So, is it just a bad omen or a symbol of Tanjiro’s importance? Read more to find out!

What does a black nichirin blade signify?

As with usual connotations of black, a black nichirin blade doesn’t signify the happiest of things.

For one, there are not enough black blade users that one could base anything off of. Its because most who did end up with one, did not live for long. For demon slayers, they are not really the brightest of omens.

As mentioned in the manga, the scarce number of black nichirin sword users is the reason why less is known about it. It is said to be the mark of an unsuccessful swordsman.

This puts an ominous cast over Tanjiro’s own future! Haganezuka, looking at Tanjiro’s appearance, predicted that he would end up with a red blade that would signify his good luck and his family’s work with fire.

Tanjiro’s whole name in fact symbolises his connection with charcoal and fire; the kanji for “tan” meaning charcoal, the first half of his surname “kama” is a Japanese furnace that is used with charcoal.

Therefore, does the black blade signify the trials and tribulations one may face later on? While the other characters have suffered immensely.

Tanjiro’s story ties back to centuries ago with that of Yoriichi Tsugikuni, which could probably emphasise his own suffering and role which lead to the black blade.

But, more on that later. First, let’s look at the information that Kyojuro Rengoku had.

Rengoku’s knowledge of the blade

Rengoku gave us some valuable input on how breathing styles came to be and their connection to nichirin blades. As we know, each style seems to have its own colour coding.

While he lists the basic five breathing styles, there is no mention of the Sun Breathing. This is because nobody had heard of “Hinokami Kagura” before.

So firstly, that means that the colour denoted for Sun Breathing is unknown.

More importantly, Rengoku mentions that he personally too has never seen a black nichirin blade swordsman before. Other than that, he mentions two more important things.

Firstly, no black blade user has ever been a Hashira. This again ties down to the aforementioned belief that black blade swordsmen don’t make it far off in the corps.

Secondly, he mentions that this blade signifies those who can’t find any one breathing style to stick to.

This would make a lot of sense in Tanjiro’s case. Tanjiro started off with Water Breathing before discovering Sun Breathing/ Hinokami Kagura.

He uses both styles thereafter. Therefore, the dual nature of Tanjiro’s style of breathing could probably serve as evidence for what Rengoku said.

Warning: The next section contains spoilers from the Demon Slayer manga. Read ahead at your own discretion.

As mentioned above, Tanjiro’s importance in the conflict is centuries old. This is why his Hanafuda Earrings or Hinokami Kagura are no ordinary family heirlooms.

This is due to one of his ancestor’s strong friendship with the progenitor of breathing styles: Yoriichi Tsugikuni.

Yoriichi was the one who invented breathing styles, coming up with Sun Breathing.

Due to its complex nature, however, no one (or at the most, very few) were able to learn it, which is what gave birth to the other five basic styles as students incorporated the learnings into their ways.

Muzan managed to strike down any Demon Slayer Corps member who could manage to learn Sun Breathing. Therefore, all information about this style was lost.

To make matters worse, Kyojuro’s father, Shinjuro vandalised the records that could have had some information.

Putting that aside, Yoriichi’s life was nothing short of a tragedy.

If black blades are representative of the sadness that sits inside the heart of someone, suppressed by their resolve to keep moving forward, then it makes sense that both Yoriichi and Tanjiro ended up with black blades.

Tanjiro himself saw his life change in under a night, bidding goodbye to his happy life.

While this is not meant to invalidate the struggles of the other characters, some who arguably suffered worst background stories than Tanjiro, both Yoriichi and Tanjiro have similarities.

Both saw their siblings becoming demonized and suffered the horrors of picking up a sword and watching comrades die.

The seemingly tragic lives of both Sun Breathers is why its a popular fan theory that their blades are black.

While there is no confirmation that Yoriichi has a black blade, the design and seemingly no mention of any other colour has made fans assume that he wielded a black nichirin blade after all.

On a more practical note, there is another reason why Sun Breathers may have a black blade. As we know, nichirin blades absorb sunlight, which is what kills a demon.

Therefore, what if black represents the ability of absorbing the most sunlight, which would signify Sun Breathing?

Black is actually not a colour, but the absence of it! Also if you paid enough attention in school, you’d know that black is the best absorber of sunlight.

With Sun Breathing being the creator of all other styles, its arguably the most powerful.

Therefore, the best way the Sun can be helpful is when its rays are used to their full capacity. Therefore, black could signify the blessing of the sun that the users have in the form of a black nichirin blade.

Additionally, black also absorbs all colours. Being the first breathing style that gave birth to other styles, it would symbolically further make sense why the Sun Breathing style users have black blades.

While a black blade may be an anomaly, it is still a nichirin blade after all. There is no records for black blades not working similarly to their other coloured counterparts.

The only difference that a black blade has from others is the lore and omens attached to it. Therefore, yes, black blades can turn crimson red if they meet one of any conditions written below.

Both Tanjiro and Yoriichi managed to get their blades to turn crimson.

While Yoriichi’s way was more straightforward, Tanjiro manages to turn his black nichirin blade crimson with not only his demon slayer mark but Nezuko’s Blood Demon Art as well.

Firstly, if a user grips their sword and pours all their strength into the nichirin sword it can turn red. The strength of the user results in the blade’s temperature rising.

Yoriichi was the first demon slayer to activate the crimson red nichirin blade.

Do you think the black blade is actually the sign of a Sun Breathing user, or Rengoku’s information has more mettle? Let us know in the comments!