How Did Naruto Escape Jigen’s Seal? All of us Boruto fans were in shock when Jigen sealed Naruto in chapter 38 of the Boruto manga. Stuck with grief and fear, you must’ve wondered, did Naruto escape the seal? Well, the answer is yes! Now, the only question that remains is, how did Naruto escape from Jigen’s seal! Keep reading this article to know the answer!

But first, let’s understand how Naruto was sealed to refresh your memory!

Contents hide
How was Naruto Sealed?
So, Why Did Jigen Seal Naruto?
How did Naruto Escape Jigen’s Seal?
TL;DR:

How was Naruto Sealed?

Jigen decided to pay a visit to Kawaki in Konoha. It seems like Jigen expected to take Kawaki back with ease, which could never happen! Jigen teleported himself and Naruto to one of his dimensions, hoping that he could leave the Hokage behind forever. However, Sasuke arrived at the dimension just in the nick of time, saving Naruto.

Then, the three went all out in a death battle, which ultimately resulted in Jigen standing tall as the victor. With the duo unable to move after having their bodies pierced with multiple chakra rods; Jigen informed the two that he intends to seal Naruto and kill Sasuke right away. However, Naruto convinces Sasuke to escape, leaving him alone with Jigen.

With Sasuke gone, Jigen has nothing to do in this dimension, except for sealing Naruto. Hence, he sealed Naruto in an object and left him behind forever.

So, Why Did Jigen Seal Naruto?

The answer is quite simple; he just couldn’t kill Naruto. Yes, Naruto is a mortal but there are quite a few reasons as to why Jigen didn’t end Naruto’s life. Let’s dig into them now!

1) Jigen does not have any business with Naruto:

It’s just as Jigen said in chapter 36 of the manga, Jigen has no business with Naruto whatsoever. His existence is of no importance to him. So killing him would only be a waste of time for him since he’s way more interested in Boruto and Kawaki; as they have Karma Seals.

Naruto was of utmost importance for Momoshiki, the previous Otsutsuki invader since he was unaware of a Karma vessel’s existence. And, this clearly isn’t the case with Isshiki (Jigen). Hence, he doesn’t have to go through the work of defeating Naruto, extracting all the Nine Tailed Beasts and then obtaining the chakra fruit. Instead, he just has to go pick up a kid (Boruto) and drop him into the Ten-Tails’ mouth.

2) Killing Naruto will take a lot of time:

This is because Naruto and Kurama are naturally gifted. Naruto, being an Uzumaki has a massive life force, and Kurama is the strongest of all the Nine-Tailed Beasts. It took quite a while for Momoshiki to extract even half of Naruto’s powers, so killing him is definitely going to be time-consuming.

Jigen doesn’t want to waste so much time since Naruto is insignificant to his end goal; he’d rather spend that time kidnapping Kawaki and Boruto.

Jigen was in terrible shape himself due to the duo’s relentless attacks combined with the repercussions of using Isshiki’s overwhelming power. This damage can be seen physically, as there were cracks in Jigen’s belly section, and Jigen’s body also shed a tear. This is because of the vessel’s incompatibility with Isshiki and his powers. In fact, Jigen’s chakra level almost dropped to zero!

He needed constant healing for 2 days straight to return back to normal. He couldn’t even kidnap Boruto and Kawaki due to the damage, even though this was his golden chance!

Hence, he couldn’t risk wasting his time trying to kill Naruto; since he didn’t know how long he could last himself and Naruto would certainly try to fight back in any way possible out of desperation.

This definitely isn’t a fitting end to Naruto’s tale, right? the Hokage seemed completely helpless and weak. We all knew that, and so did Kishimoto and Kodachi! Hence, He did manage to escape the seal! But, the question still remains, how did Naruto escape Jigen’s seal!?

All of this started when Kawaki’s prosthetic arm collapsed in the shinobi world. This was an indication that something happened to Naruto while he was fighting Jigen. This made everyone feel uneasy, especially Kawaki; who believed all of this to be his fault.

Hence, he decided that there has to be something that he can do to save his beloved Hokage.
During his conversation with Sarada and others about Naruto, the prosthetic arm started emitting light again! This indicated that Naruto was just unconscious, he’s still alive!

While thinking about everything Naruto and Jigen told him, Kawaki comes up with a theory; he can do everything that Jigen can do.  And, this proves to be right! Using Boruto’s Karma, he creates a resonance that boosts his Karma’s powers, and opens a rift in space-time, just like Jigen!

Here, Kawaki used the interconnection of chakra theory, assuming that since it connects him to Naruto, it also applies to Jigen and him. Since he has Jigen’s karma, he must’ve gained Jigen’s exact powers! He also had some proof, like being able to absorb chakra just like Jigen!

This quick thinking allowed him and team 7 to rush in to rescue Naruto! The four of them found themselves on barren land, with no sign of life. This land was identical to the one where Naruto and Sasuke fought Jigen. Yes, Kawaki teleported himself and the others to the same dimension! This is also possible because Kawaki has the same powers as Jigen!

While it seemed like Jigen left Naruto alone, he did leave a guard behind! This guard was Boro, another inner of Kara!

Then, the new team 7 took on Boro with all of their strength! As Kawaki said, Boro was quite formidable! In fact, he’s stronger than Delta. Boro had super regenerative abilities, incomparable to anyone else. He could recover from anything, as Boruto and Kawaki blew his torso off to no avail!

Boro’s signature technique had started working a while ago as well. The Dark Mist, which is unaffected by wind release jutsu, can be used for various purposes. Boro could mix gunpowder with Dark Mist, to create attacks seemingly out of nowhere! Moreover, he could also use it as an agent to spread a virus!
Amado had created a fast-acting virus, which would paralyse the target’s body as soon as the virus came in contact with it. Amado made this virus using Boro’s blood, meaning that Boro is unaffected by the virus and it exists as a physical matter rather than chakra. This means that Boruto, Kawaki or even Jigen cannot use their Karma to absorb it!

This virus almost led to the new team 7’s defeat, before Sarada and Mitsuki somehow managed to escape with Boruto and Kawaki. During this, Mitsuki extracted some of Boro’s blood using his snakes. He asked Sarada to use her Sharingan as a microscope to understand the virus’ origin.

Sarada was able to understand the virus due to her proficiency with the Sharingan, which helped them to make an antidote against Boro’s virus!

However, things don’t end here! Remember that Boro has incomparable regenerative abilities too! Hence, team 7 was still in a tough spot. With everybody engaging Boro, Sarada observed him from the back using her Sharingan, and that’s when she found the answer!

Boro uses a simple hand sign to transfer his core to a certain part of his body which allows him to regenerate from any damage quickly! Now that Sarada had located the core, the only thing left was to destroy it! Knowing that Boro can weave the hand sign quickly with ease, she had only one chance to end him, that too before he could weave that hand sign!

This left her with only one option, a Jutsu she had never used in battle; the Chidori! Chidori is a lightning-fast attack that is accurate with the Sharingan! Putting all her faith into her father’s signature attack, she charged in with the Chidori and was successful!

Boro’s body went haywire as soon as Sarada destroyed the core. While everybody was concerned, Kawaki stated that they’re safe now and should focus on saving Naruto instead. With their enemy neutralised, they rushed towards the sealing object. Wondering how to open it, Boruto resolved to brute strength, just like his dad.

Nonetheless, Kawaki found the key again. Boro stated that only Jigen can open this seal, meaning that this is one of his powers too! Hence, Kawaki asked Boruto to lend his Karam’s strength once again and used the power of Resonance to open the sealing!

Jigen sealed Naruto after their fight in his dimension. Expecting Kawaki to come, he left Boro behind to guard Naruto. Kawaki and team 7 were welcomed by Boro inside the dimension, with the Hokage inside the sealing object.

Later, the new team 7 fought hard to save Naruto. However, they were initially crushed by Boro’s hidden techniques. They escaped for their lives, re-evaluated the situation and devised a plan. Sarada dealt the final blow to Boro’s core with the Chidori and destroyed it. With Boro neutralised, they rushed towards Naruto to save him.

While nobody understood how to open the seal, Kawaki used Boro’s words to understand that he can open the seal. This is because Boro stated that only Jigen could open this seal; meaning Kawaki could too! Hence, he used resonance to open the seal, finally allowing Naruto to escape Jigen’s seal!

Phew, quite intense, right! The new team 7 managed to save their Lord Hokage by putting their lives on the line and stepping up to the occasion! So, what do you think? Was this a good showing of the next generations’ power? Are you satisfied with this? Let us know in the comments below! 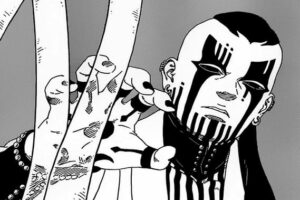 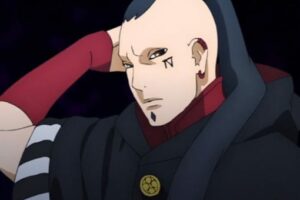